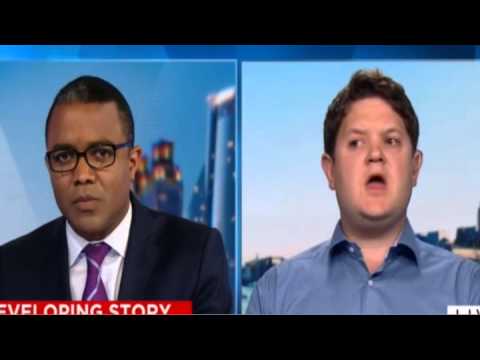 (MindSetAThreat.com)A recent interview aired on CNN, in which Sunday Times ‘journalist’ Tom Harper attempted to defend his report that the Edward Snowden Leaks jeopardized the safety of British spies, turned out to be a perfect example of everything wrong with mainstream journalism. The CNN anchor asked Harper how he knew what he was claiming was true. Hilarity ensued:

Effectively what Harper just admitted is: I write what I’m told to.

This is somewhat endemic throughout the mainstream media. In this case the ‘journalist’ in question was called out for his badly sourced report, even by members within the mainstream media. But what happens when a lot more is at stake? A government is reluctant to bring a country to war if there’s a lacking in public support. Public support often stems from the information we are given through the media. So what happens when the media toes the official line, without question, in the build up to a war?

Iraq was invaded in 2003 and then militarily occupied for nearly a decade. Regardless of what you think about the ‘official’ 9/11 narrative, Iraq had nothing to do with the attacks. In fact, 15 out of the 19 hijackers were from the U.S’s and Britain’s close ally Saudi Arabia. Although the public’s emotional reaction to 9/11 played a huge in role in building support for the Iraq war, the threat of WMDs (weapons of mass destruction) was the cherry on the cake of manufacturing public support for a war with Iraq.

The invasion of Iraq by the joint forces of the U.S, U.K, Australia and Poland led to deaths of 100,000s of civilians and the subsequent power vacuum that led to the rise of ISIS. There were no weapons of mass destruction. All of that blood shed was based on falsified evidence that was presented in a way to manufacture a threat that never existed. Those who ordered the invasion of a country under false pretenses should be held accountable and trialed for war crimes but so too should those who propagated such a destructive lie be held accountable.

Taking one example-being the New York Times, a prestigious paper read all over the world. The New York Times toed the line of WMD’s in 2002. Namely the ‘aluminum tube’ narrative propagated by Colin Powell. Powell consciously lied about about WMD’s and one of the most well respected newspapers in the world held his hand in articles such as ‘ Threats and responces: The Iraqis; U.S says Hussein Intensifies Quest For A-bomb Parts’. Just like Harper’s badly sourced claims of endangering British Spies, the NYT’s article from 2002 completely lacks any legitimate evidence of Iraq building weapons of mass destruction .It simply toes the official line and with disastrous consequences. The article quotes numerous statements from government officials but fails to critically analyze the theory that the aluminum tubes in question were specifically designed for building an A-bomb and lacks any counter-narrative presenting a different viewpoint.

A set of technical experts from the Department of Energy’s (DOE) Oak Ridge, Livermore, and Los Alamos National Laboratories reviewed the CIA analysis and disagreed with this interpretation because the tube dimensions were far from ideal for this purpose. In fact, the dimensions and the aluminum alloy were identical to those of tubes acquired for rockets by Iraq in the 1980s. Furthermore, the Iraqis had developed and tested centrifuges before the first Gulf War that were much more capable than those that could have been built with the imported tubes according to a report from the Union Of Concerned Scientists. The report also found that there was endemic altering and concealing of scientific information throughout government agencies.

Did the media take on the same nature of concealment and alteration of scientific information as the political establishment? A report on Media Coverage of Weapons of Mass Destruction’ conducted by the Center for International and Security Studies at Maryland indicates that it did and it certainly is not limited to the NYTs. The study evaluated American and British media coverage of events relating to weapons of mass destruction during recent periods when WMD were big stories.The study was based on reporting by four US newspapers (The Christian Science Monitor, Los Angeles Times, New York Times, Washington Post), two London papers (The Daily Telegraph, The Guardian), three newsweeklies (Newsweek, U.S. News and World Report, The Economist) and the radio programs “Morning Edition” and “All Things Considered” on National Public Radio. It’s findings-

by October 2002, a year after the September 11 terrorist attacks, President Bush and Secretary of Defense Donald Rumsfeld’s repeated linkages of terrorism, WMD, and Iraq had engrained the three as a triple threat in the American media. The US and UK media covered in the study tended to merely reiterate the Bush administration’s formulation of the “War on Terror”

When Bush stated that Americans were vulnerable to WMD in the hands of terrorists, the media effectively magnified those fears by prioritizing that news. Front-page and top-of-the-news stories led with the President’s analysis. Where alternative perspectives were presented in the coverage, they tended to be buried

Weren’t these war mongering neo-cons lucky to have a mass media so complacent, so unquestionably loyal to their cause that they parrot their lies right on cue and without expressing the slightest bit of doubt?

Surely we have all learned from our mistakes, right?

Let’s take a look at a more recent conflict. The Ukrainian conflict to be specific. Let’s see how the mainstream media reported on the threat of a Russian invasion of Ukraine. Will the media toe the official line when presented with no factual evidence just like the WMDs fiasco?

The New York Times, The Washington Post and Russia Invading Ukraine…or maybe not

Since the U.S state department’s neo-nazi led coup in Ukraine and the subsequent civil war that followed from the the shelling of residential areas by the new regime in Kiev, accusations backed up with absolutely no evidence that Russia has moved or is preparing to move troops inside of Ukraine have been making headlines in the west. For example:

An article in the New York Times August 27th 2014: ” Russia reinforced what Western and Ukrainian officials described as a stealth invasion on Wednesday , sending armored troops across the border as it expanded the conflict to a new section of Ukrainian territory”

But these photographs were never made public…or didn’t exist. We are just supposed to take The NYT’s word for it. After all their track record is pretty good, right?

Or lets take the Washington post’s article from Nov. 13:

“Russian troops massing near Ukraine are actively concealing their positions and establishing supply lines that could be used in a prolonged deployment, ratcheting up concerns that Moscow is preparing for another [sic] major incursion and not conducting exercises as it claims, US officials said.”

Russia never invaded Ukraine. In fact, French military intelligence admitted their was no evidence to back up these claims perpetuated consistently by Washington, Downing street and the new regime in Kiev then parroted by the MSM.

This is just one more example of the nature of mainstream media. Another recent example is The NYTs mimicking of Washington’s attempt to frame the Syrian Government for a chemical weapons attack. The attack was largely de-bunked and if fact implicated the NATO backed Syrian rebels in the alternative media and bull horned in the mainstream media. The NYTs article pointed the blame for the Aug 21 attack towards the Syrian government but later was forced to rethink it’s assumptions when more contrary evidence appeared in a new article titled ‘New Study Refines View Of Sarin Attack In Syria’.

Although as investigative journalist Robert Parry points out, “you’d be forgiven if you missed the Times’ embarrassing confession, since it was buried on page 8, below the fold, 18 paragraphs into a story under the not-so-eye-catching title, “New Study Refines View Of Sarin Attack in Syria.”

The MSM parrots statements made by ‘officials’ without ever questioning not only the motive behind such statements but excepts that information without a shred of evidence. Tom Harper’s awkward admission of simply regurgitating what the official line is should be seen as a microcosm example of what journalism has become. So, why has journalism become just another mouthpiece for government and corporate interest? It’s most likely to do with the revolving door from news media to politics, the oligarchical consolidation of media ownership, pleasing shareholders and even covert operations making use of media to manipulate public opinion like operation mockingbird.

If that sounds a bit crazy to you, here’s a report on German Journalist, Udo Ulfkotte’s recent book ‘Bought Journalists’ in which he claims he was paid by the CIA and German intelligence to write pro-NATO stories.

Luckily there’s a solution. The internet has given a platform to those who previously would of gone totally un-noticed. Alternative media has been thriving in the age of the internet. Sites like WeAreChange, TheCorbett Report, StormCloudsGathering and the Anti-Media (and hopefully this website) bring ethical, watchdog-style and truthful journalism back into the public sphere. No shareholders to please, no pay-offs, no bullsh*t. Just real journalism.