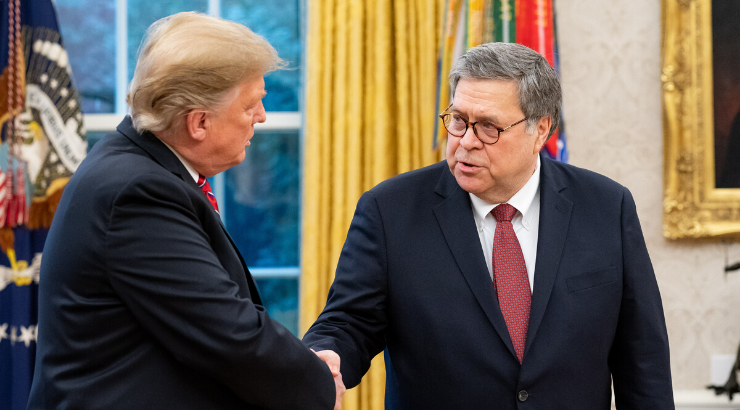 Attorney General William Barr will dispute a fundamental finding in the upcoming Inspector General report – namely that the FBI was justified in launching an operation Crossfire Hurricane, the agency’s official covert counterintelligence investigation into links between the Trump campaign and Russian officials, according to the Washington Post.

While IG Michael Horowitz is said to have concluded that the agency had enough information to launch the probe on July 31, 2016 after Trump campaign aide George Papadopoulos repeated a rumor that Russia had dirt on Hillary Clinton, Barr has reportedly told associates that Horowitz does not know about – or did not include – potentially exculpatory evidence held by other US agencies such as the CIA, which could alter his report’s conclusion.

In July, Fox News reported that exculpatory evidence existed which the FBI failed to include in surveillance warrant applications in which Papadopoulos denies having any contact with the Russians, when he was in fact told about the ‘Clinton dirt’ by Joseph Mifsud, a mysterious Maltese professor (and self-professed member of the Clinton foundation) who has ties to George Soros’ Open Society Foundation.

Many believe Papadopoulos was the victim of an entrapment scheme, by which Mifsud would seed him with information that an Australian diplomat would later extract from him at a London bar, which made its way to the FBI – officially leading to the launch of Operation Crossfire Hurricane.

And the exculpatory evidence? Downer – a Clinton ally – likely recorded Papadopoulos saying he had no Russian contacts.

Have been contacted by about a dozen Australian journalists for comment on Clinton errand boy, Alexander Downer, and him being idiotic enough to spy on me with his phone. The transcript of my meeting with him will show Australia was willfully trying to sabotage Donald Trump.

Barr’s information also comes from a concurrent, ongoing investigation into the Obama DOJ conducted by Connecticut US Attorney John Durham.

Part of Barr’s reluctance to accept that finding is related to another investigation, one being conducted by Connecticut U.S. Attorney John Durham, into how intelligence agencies pursued allegations of Russian election tampering in 2016. Barr has traveled abroad to personally ask foreign officials to assist Durham in that work. Even as the inspector general’s review is ending, Durham’s investigation continues. –Washington Post

Barr, through Durham, has been investigating Mifsud – who told Italian media “I never got any money from the Russians: my conscience is clear,” adding “I am not a secret agent.” The Maltese professor is currently MIA.

As the Post‘s Devlin Barrett (who spoke with former FBI lawyer Lisa Page) notes, Barr’s disagreement with Horowitz not only sets the stage for a showdown within the DOJ, it will spark partisan outrage among Democrats who have already accused the AG of being Trump’s personal lawyer.

In recent weeks, Democrats have charged that Barr’s Justice Department was too quick to decide not to investigate Trump over his efforts to convince Ukraine’s president, Volodymyr Zelensky, to announce an investigation of Democratic presidential candidate Joe Biden. The Ukraine controversy has led to an impeachment inquiry. –Washington Post

Barr, meanwhile, has slammed Democrats for abusing legal procedures and Congressional standards in their pursuit of Donald Trump, saying earlier this month “In waging a scorched-earth, no-holds-barred war against this administration, it is the left that is engaged in shredding norms and undermining the rule of law.”

In April, Barr used the term “spying” to describe what the Obama DOJ did to the Trump campaign.