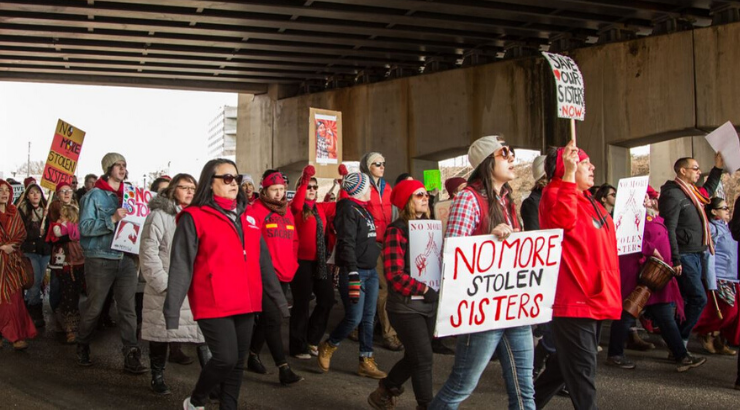 On Tuesday, U.S. President Donald Trump signed an executive order establishing a task force to tackle what he called the “sobering and heartbreaking” issue of missing and murdered Indigenous women. The president added that such action “should’ve been done a long time ago.”

The new task force, Operation Lady Justice, will be overseen by U.S. Attorney General William Barr and interior secretary David Bernhardt. Barr announced a plan, the Missing and Murdered Indigenous Persons Initiative, to address the crisis on Friday during a visit with tribal leaders in Montana at the Flathead Reservation.

Barr said in a statement:

“American Indian and Alaska Native people suffer from unacceptable and disproportionately high levels of violence, which can have lasting impacts on families and communities. Too many of these families have experienced the loss of loved ones who went missing or were murdered.”

“We will leverage every resource we have to bring safety to our tribal communities, and we will not waver in this mission.”

The signing comes as U.S. states, including Minnesota, also move to create task forces to tackle the issue.

“This certainly opens up opportunities for states and tribes to collaborate with federal resources,” Minnesota Representative and co-chair of the state’s task force, Mary Kunesh-Podein, said of the order.

It has been well known for years among North American’s Indigenous population that Native women face some of continent’s highest rates of sexual violence, murder, and domestic abuse, but the issue had previously gained little traction outside of the Indigenous community.

The National Institute of Justice has estimated that a shocking 84%—or 1.5 million—Indigenous women have experienced violence while more than half have experienced sexual violence. But according to an Urban Indian Health Institute report released in 2018, only 116 of the 5,712 cases of missing and murdered Indigenous girls from 2016 were logged in the Justice Department’s database.

And according to a 2008 study, women in some Native communities are 10 times more likely to be murdered than the national average.

And despite the studies and statistics, many fear these numbers significantly undercut reality.

The new U.S. initiative will invest $1.5 million to hire coordinators in 11 U.S. attorney’s offices across the country. The coordinators will develop protocols to help coordinate law enforcement responses to reported missing persons. The protocols will also apply to unsolved cases.

The initiative will also pave the way for local or tribal law enforcement to call on the FBI to assist in such cases and for a multi-jurisdictional team to review the numerous cold cases that have sat untouched for years.

The department will conduct an in-depth analysis of its data collection practices and databases in search of ways to improve current practices.

At the signing on Tuesday, President Trump was joined at the signing of the executive order by Barr, Native American tribal leaders, and administration officials.

Shannon Holsey, president of the Stockbridge-Munsee Community Band of Mohican Indians, said in a statement:

“While there is so much that needs to be done to stop the violence perpetrated on Native women and girls, I appreciate the Administration for taking an important first step in establishing this Task Force.”

Violence against Native women is not reserved to violence perpetrated by Native men or solely on reservations. Unfortunately, for years it was nearly impossible to take action against non-Native perpetrators who abused women on reservations. In fact, it was actually prohibited under federal law.

In 2013, Deborah Parker, a board member of the National Indigenous Women’s Resource Center, traveled to Washington DC to help pass legislation paving the way for non-Native abusers to face consequences for their actions on reservations. Parker’s tribe, the Tulalip Tribes, became the first to implement the new legislation after an Indigenous women was raped and assaulted. Shockingly, it was the 20th time tribal police interacted with the perpetrator but the very first time they possessed the power to arrest him.

In the first five years after the new legislation was enacted, a report from the National Congress of American Indians revealed that 18 tribes were able to make 143 arrests that were previously impossible. And 85 of those defendants account for a shocking 378 prior contacts with tribal police whose hands were previously tied.

Despite the progress made with Tuesday’s executive order signing, Iowa senator Joni Ernst introduced the Senate Republicans’ version of the Violence Against Women Act (Vawa) reauthorization bill that would actually roll back the progress made in 2013, providing non-Native abusers a loophole if they don’t wish to comply with tribal laws.

This comes after 33 House Republicans joined Democrats in April to pass a comprehensive Vawa reauthorization that would expand the gains made in 2013. While the bill boasted 47 Democrat co-sponsors, it was void of Republican support.

“It is predominantly Republicans who are telling tribal Nations that we are incapable of protecting our people. We’ve worked with folks from both sides of the aisle but at this time to make it a political game is incredibly harmful.

I am a mom. I want to make sure my daughter isn’t abused. And if we have well supported court systems criminals will know. They will know not to come on our reservations and harm our women.”

“We know where the sexual predators go. They are preying on Native women in numbers that are just offensive because they know that they can commit offenses with impunity,” Alaska’s Republican senator, Lisa Murkowski, said last Thursday.