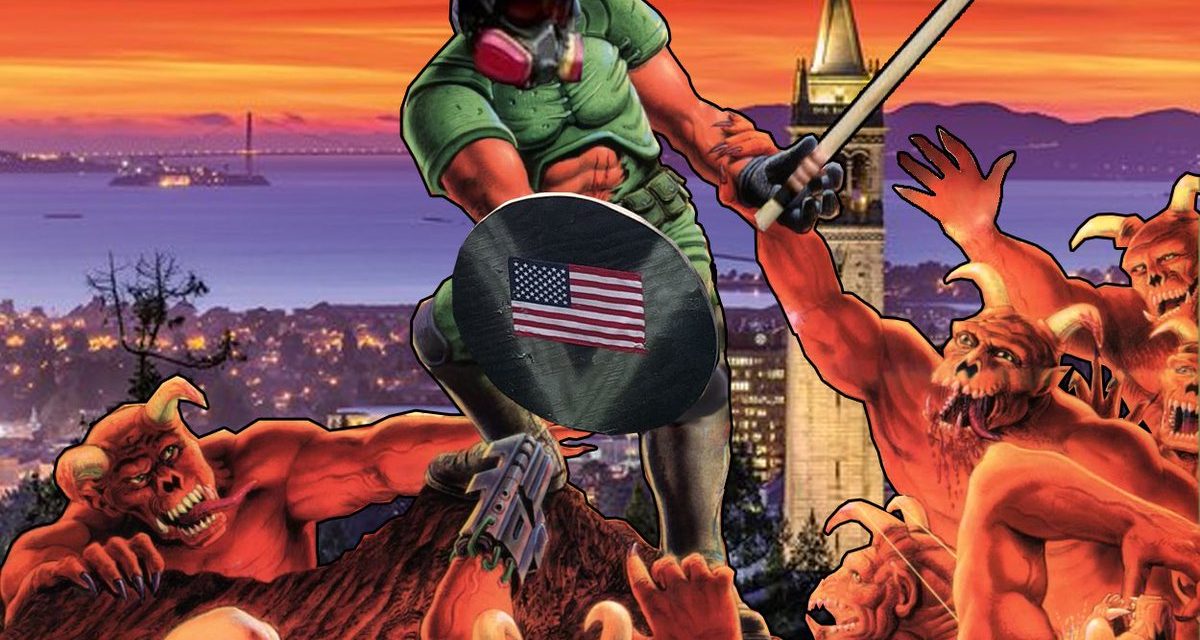 A “based” cult hero has emerged from the violent showdown between antifa and supporters of President Donald Trump in Berkeley over the weekend — and after learning of his arrest, the right banded together to raise $70,000 in just 24 hours to support his legal defense.

There is a new HERO against the left….. and he is the BASED STICK MAN#Trump #antifia #basedstickman pic.twitter.com/VLn6ISuGXv

Kyle Chapman, 41, was in attendance at the “March 4 Trump,” when a large amount of protesters in black bloc attire arrived for a confrontation.

The protest was reportedly organized by militant leftist group By Any Means Necessary (BAMN), who also claimed involvement in the riot in the city last month — boasting that they were one of the “organizers of Berkeley’s shutdown of white neo-fascist Milo Yiannopoulos.” In 2005, the group was identified by the FBI as “thought to be involved in terrorist activities.”

As the two groups clashed, ‘Make America Great Again’ hats were being snatched and burned, pepper spray was flying from both sides, and a number of skirmishes broke out. Among those assaulted by the militant leftists was an elderly man.

As the violence continued, Chapman emerged — wearing a helmet and respirator mask and holding a shield adorned with an American flag in one hand and a big stick in the other. The “alt-knight,” better known as “Based Stickman” was born.

In a video of the incident, Chapman is seen lunging forward and breaking the stick over the head of an antifa militant who was charging towards him.

Chapman was praised as a hero online, as those present during the incident asserted that he had been protecting Trump supporters, not simply being aggressively violent.

The police had a different view of the events however, and he is now facing up to six felonies including assault with a deadly weapon and rioting.

Realizing the serious nature of the charges, supporters launched a GoFundMe to help cover the costs of his defense, but it was quickly removed by the website. In response, research crowdfunding site WeSeachr stepped in to help — and raised nearly $70,000 in the first 24 hours.

“The funds collected in this bounty will be used to provide for the legal defense of ‘Based Stick Man,’ identified as Kyle Chapman, 41, of California, previously Texas, as well as financial assistance for his family if need be. Chapman has been charged with up to 6 felonies in Berkeley, California,” the fundraiser stated.

On Monday evening, with the help of WeSearchr and those who contributed, his $5,000 bail was paid and he was released from custody.

Chapman was scheduled to be arraigned on Tuesday morning, and we will update this story when more details become available.