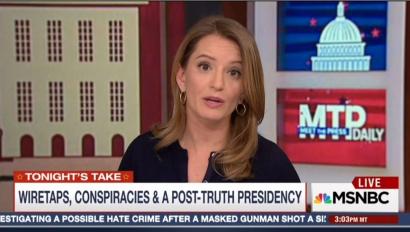 Katy Tur of MSNBC has astonishingly claimed live on air that no news organizations have alleged that there are ties between the Trump campaign and Russia.

During an interview with Republican Congressman Chris Stewart of Utah for Meet the Press Daily on Monday, Tur seemed extremely irritated, demanding to know what outlets have made the claims.

“Let’s start with a simple question, tell us why you are taking the President’s claims seriously? After all, you’re on the Intel committee. What hard intelligence do you have to support his claims?” Tur asked.

“Oh my heavens, the problem is we have all sorts of claims made by all sorts of people and news organizations that we don’t have evidence of right now. This—“ Stewart began to respond.

“A what specifically are you talking about ‘all sorts of claims made by all sorts of news organizations?’” Tur interrupted.

Stewart began to speak again, saying, “well for example, we’ve had some people claim that there’s direct ties between Trump campaign officials and Russian KGB or GRU agents. I’m not aware of any of those—”

Tur interrupted again, asking, “what news organizations have claimed that?”

“Could you? I don’t think any news organization actually claimed that there were direct ties between the Trump campaign and Russian spies,” Tur demanded, more aggressively.

Clearly unprepared for the barrage, Stewart stated, “well, certainly that’s a narrative. That’s what we’ve been talking about for a couple weeks, isn’t it? This kind of idea that there may be claims of that.”

As absurd as the accusations are that the Trump campaign was colluding with the Russians, Tur’s hostility was certainly unwarranted as news outlets reporting on that story include her own.

On Sunday, the network explored why a FISA warrant would have been issued for Trump Tower, pondering if it was due to Trump having ties to Russia.

In fact, a simple search of the MSNBC website appears to show speculation about Trump’s campaign having ties to Russia being a major story nearly every day in recent weeks.