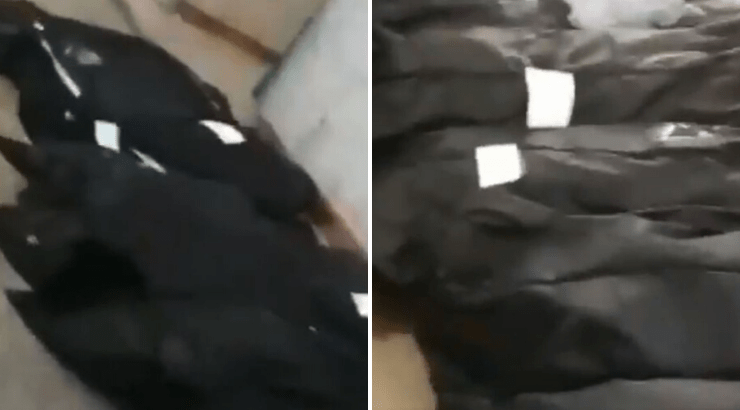 More shocking leaked footage published by the BBC shows bodies piling up at a local morgue in Qom, said to be victims of the country’s spiraling coronavirus outbreak. Located 140km to the south of Tehran, Qom is believed ground zero for Iran’s epidemic, and crucially is a popular place of Shia religious pilgrimage.

Mideast-based correspondent Joyce Karam comments of the newly published video: “If these are confirmed to be from Corona as videos claim, death toll is higher than the government claims (officially at 77).”

Horrific thread of BBC obtained Videos from #Iran shows bagged bodies in Qom from moment of death till burial.

If these are confirmed to be from Corona as videos claim, death toll is higher than Gov. claims (77): pic.twitter.com/vxmTren3Lt

As of Tuesday Iranian health officials announced 2,336 coronavirus cases and 77 dead, including 23 parliament members confirmed for the virus, which is roughly 10% of Iran’s legislature.

All of this strongly suggests much bigger numbers of infected nationwide, after multiple reports alleged the Islamic Republic is hiding its true numbers, or at least refusing to test.

The country is bracing itself for the possibility of “tens of thousands” getting tested and possibly being confirmed for the virus after the latest spike in cases, an official said previously.

Among the new series of leaked videos includes footage that appears to show preparations for mass graves as the crisis rapidly worsens in the Islamic Republic.

Ayatollah Khamenei and others among Tehran’s top leadership have claimed Iran’s handling of the epidemic has been timely and transparent.

But on Tuesday the supreme leader ordered the armed forces to assist Health Ministry in combating the spread.

As the footage went viral after first appearing on Iranian social, later picked up by BBC, the video maker’s commentary has been translated and captioned in the below, which noted the number of bodies being processed “seems like it’s never ending”:

A new video with translation, a dire situation in Iran (Video by @HeshmatAlavi), Translated by my friend, an Iranian journalist, can’t publish journalist’s name due to concerns for safety of her family in Iran. There’s no freedom of press in that country. pic.twitter.com/bHqUZQqLwR

It’s as yet unclear what role national troops could play, but hundreds of thousands could be mobilized: “After downplaying the coronavirus as recently as last week, Iranian authorities now say they have plans to potentially mobilize 300,000 soldiers and volunteers to confront the virus,” Fox News reported citing state sources.

The series of clips published by BBC Persian Tuesday is not the first such to come out of Iran, but underscores the widespread allegation that authorities are greatly downplaying the true death toll and infected count.