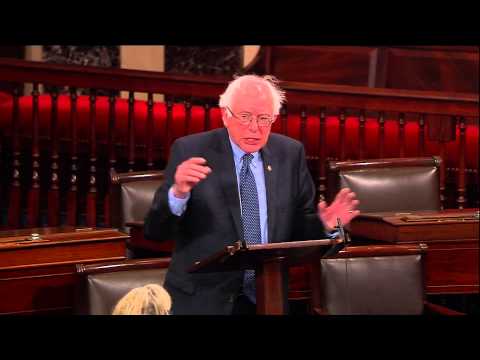 “If Congress cannot regulate Wall Street, there is just one alternative,” said Sanders in a speech Saturday. “It is time to break these too-big-to-fail banks up so that they can never again destroy the jobs, homes, and life savings of the American people.”

Sanders, who has signaled he may run for president in 2016 to offer a true progressive alternative, said he would introduce legislation at the start of next congressional session to break up the largest investment banks.

He made the remarks during a debate on a controversial spending bill that contains provisions written by Citigroup lobbyists to weaken Dodd-Frank oversight of banking.

“If Wall Street lobbyists can literally write a provision into law that will allow too-big-to-fail banks to make the same risky bets that nearly destroyed our economy just a few years ago, it should be obvious to all that their incredible economic and political power is a huge danger to our economy and our way of life,” Sanders said.

Sanders also said he would  introduce legislation intended to strengthen Social Security to lift a growing number of American seniors above the poverty level.

“The best way to expand Social Security is to ask the wealthiest people in our country to pay more into the system by scrapping the cap on income that is subject to the Social Security payroll tax,” he said.

Sanders said current rules allow a billionaire to pay the same amount into Social Security as a person who earns $117,000 a year.

“This is regressive, this is unfair, this is absurd,” the senator said. “If we lifted this cap and applied the Social Security payroll tax to income above $250,000 — not $117,000, but $250,000 a year, we could not only extend the solvency of Social Security for decades to come, which is what we want to do, but we could also provide the resources necessary to expand Social Security benefits. That is exactly what we should be doing, and that in fact is what the American people want us to do.”

A poll conducted in August found that 90 percent of Democratic voters supported lifting the cap, the senator said, along with 73 percent of independent voters and 73 percent of Republican voters.

“Sadly, despite this overwhelming support for expanding Social Security, the CEOs at the Business Roundtable — the organization representing the largest corporations in America — came out with a plan last year which does exactly what the American people do not want to do,” Sanders said. “The American people want to expand Social Security and the Business Roundtable came out with a plan that would increase the Social Security retirement age from 67 to 70 and severely cut the COLA of senior citizens and disabled veterans.”