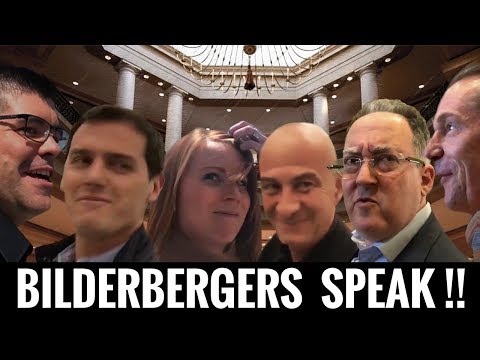 At Bilderberg this year Luke, Dan Dicks, Max, got permits to use their cameras at the airport, allowing interactions with 40+ Bilderberg attendees!..

Some of them said fascinating things.. others essentially blew them off- speaking in generalizations, talking about the weather, and contradicting each other at times.

“If we need to find instruments, we will find instruments.. one should never underestimate the degree of innovation that also takes place within central banks.” -Klaas Knot

Approaching him, Luke complimented his jacket, inspiring a big smile.

Luke: What are you most looking forward to at Bilderberg?

Klaas said interesting discussion, exchanges of view, and if it helps to lower the international boundaries- that would be a most welcome development

He also said there is no conflict of interest @ Bilderberg and he wouldn’t be making any statements after the conference, because that’s not the nature of the event.

Albert Rivera Diaz quotes:
“Catalonia is my homeland, Spain is my country and Europe is our future”

“There is a conservative-socialist pact to pretend that we are all either red or blue, in order to maintain an obsolete party-ocracy, a pact to conceal corruption.

Luke: What do you expect at Bilderberg this year?

Albert: Learn, wait and see, talk about the future of the world

“I would say that I practice a somewhat primitive form of Data Journalism….my ambition is to make a large Open Data site…This is a project in progress….”

“We are told that it is impossible to get out of the Euro, it is obviously nonsense….”

“Inequalities have been multiplied tenfold by the opening of borders, in particular financial globalization. In order to reduce them, as the citizens now seem to wish to rehabilitate the borders.”

Luke: What are you at Bilderberg for?

Francois: I’m a journalist so I’m here to look, to listen, to do my job- exactly as you.

He also said he’s looking forward to discussions on economics

Luke asked whether he would report on the conference afterward

He said naturally he would, and will adhere to the Chatham House rule

Prior Reporter for the BBC and The Economist magazine
Current Financial Times writer covering U.S. foreign policy, the EU and Asia
Advocated that the UK stay in the European Union

“The tea party venerates the Constitution while despising the political system it has produced.”

“I have never believed that there is a secret United Nations plot to take over the US… But, for the first time in my life, I think the formation of some sort of world government is plausible.”

“So, it seems, everything is in place. For the first time since homo sapiens began to doodle on cave walls, there is an argument, an opportunity and a means to make serious steps towards a world government.”

Luke: What are you looking forward to the most?<br>
Gideon said he hadn’t been to Bilderberg for 5 years, but it’s always interesting.  He’s most  in the climate change discussions & he’s in favor of the Paris Agreement.

Annie Loof quotes:
We want to continue to open up public monopoly to a variety of private operators and traders should be able to develop activities

“If Iran possesses nuclear weapons, its mere existence alter the Middle East’s political dynamics.  Such a shift in the balance of power affects the course also Europe.  The market would become more unstable and oil prices soar.”

Luke: What are you most looking forward to?

She said the panel discussions on current international issues

“When you cannot achieve a majority, it’s a good idea to get rid of minority stakes.”

“It amazes me to witness the masochism with which some journalists characterize their industry as a dying species. The future belongs to citizen journalism and blogs.”

Luke complimented Dopfner’s scarf and he smirked a little.

Luke: Are you looking forward to the conference and are there any items on your agenda you’d like to have heard there

Danish politician / journalist
European Commissioner for Climate Action 2010-2014
Hosted the UN Climate Change Conference in 2009
Former Danish Minister for Climate and Energy
Current Chair of the KR Foundation whose purpose is:
“to address the root causes of climate change and environmental degradation”

KR Foundation: “There is an urgent need to transform the current understanding of how growth is measured and valued and how society relates to and manages natural resources.”

“While we have good trends in renewables…we must incorporate climate change into all the choices we make. It costs a lot to invest in a non-carbon future, but (ignoring the problem) costs a lot in human suffering.” ~ Connie Hedegaard

Max: What are your expectations for this year’s Bilderberg?

Max: What do you say to those protesting, can you understand them?

Connie: No they don’t understand what it’s all about.

Connie: Nothing is prohibited, I’m here as a free person and I say whatever I want now, and during the meeting, and afterwards.

CEO of RyanAir ( a short haul discount airline ) since 1994
Well known for publicity stunts.
Personal net worth of 1B + .
Also attended Bilderberg in 2015.

“We want to annoy the fu**ers whenever we can. The best thing you can do with environmentalists is shoot them… They are luddites marching us back to the 18th century.”

“The airline business is it is mostly run by a bunch of spineless nincompoops who actually don’t want to stand up to the environmentalists and call them the lying wankers that they are.”

“If drink sales are falling off, we get the pilots to engineer a bit of turbulence. That usually spikes sales.”

“Germans will crawl bollock-naked over broken glass to get low fares.”

“All flights are fuelled with Leprechaun wee and my bullshit!”

Luke: Do you see Bilderberg as a conflict of interest?

Luke: Will you make a statement after the meeting?

Michael: Absolutely not, because we never make statements afterwards

They continue chatting about the secrecy of Bilderberg

So, we got an interesting peek into the personalities of some of the attendees

& there’s more to their conversations.. ~> click here for the full video<~

Thanks so much to all who donate and support us!