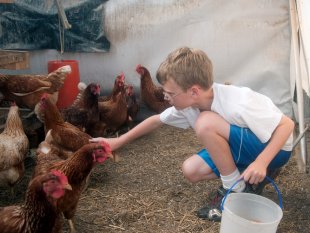 Michiganders who raise chickens, goats and ?honey ?bees on their residential property have had their right to keep livestock stripped away by the state’s Agriculture and Rural Development Commission, which says they are not protected by the same laws as commercial farms. Urban parts of Michigan, particularly Detroit, have been enjoying a renaissance of small-scale farming in recent years. Much of it has been in the form of community farms, residents providing food for themselves, and small entrepreneurs who sell fresh eggs, dairy, honey, and produce to their neighbors, sometimes off the books.

Commission Chair Diane Hanson said that the state’s previous agricultural management rules “were not suitable for livestock in urban and suburban areas.” Now, properties not zoned for agricultural use with 13 or more residences within an eighth of a mile or another residence within 250 feet may be required to cease keeping livestock if asked by local authorities.

Many urban and suburban farmers had assumed that the state’s Right to Farm Act, made law in 1981, extended to those who raise livestock in residential areas and allowed ?them to have livestock without being considered a nuisance, as long as the rules of the Act were followed. The law was originally written to protect farmers from residential encroachment impacting their agricultural operations.??

This ruling not only has backyard farmers upset, it has been met with opposition from environmental groups. The state’s chapter of the Sierra Club says that the new changes will effectively remove all protections for those raising animals on urban lots or on small acreages.

The new guidelines from the state come only a few months after a Michigan Circuit Court ruled that a Williamstown Township family could not operate a farm on their 1.5 acre property. Jeremiah and Jessica Hudson started Sweet Peas Farm at their home, near the state capital of Lansing, to ensure their five children were getting a proper diet. The Hudsons claim their kids suffer from numerous food allergies and that they had difficulty finding non-allergenic eggs and milk, which impairs their children’s ability to eat a balanced diet.