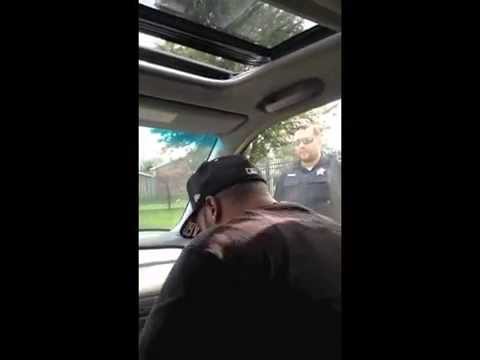 The division between police and citizens in this country continues to deepen with an incident out of Indiana caught on video showing a group of cops shattering a car window to pull out a passenger because he did not have identification.

Hammond police had pulled over the man’s girlfriend because she had not been wearing a seatbelt, which as we saw in South Carolina, can lead to a cop opening fire on a driver trying to comply with their orders.

They then asked her boyfriend, Jamal Jones, for his identification, which she should not have been under any legal obligation to provide considering he wasn’t driving.

Nevertheless, he explained that he did not have it because he was not driving, but offered to show them a ticket he had recently received, which would have given them the information they were looking for. He even reached for a backpack to show them the ticket.

However, that caused them to fear for their lives, so they drew their guns, another exampleof how complying with a cop’s orders can get you killed.

And that caused Johnson’s girlfriend, Lisa Mahone, to call 911, telling the dispatcher that she was in fear for her life.

She was also concerned that she would not make it to a Chicago hospital to see her dying mother before she lost her life.

But police apologists will be quick to fault her for not wearing a seatbelt. After all, the law is the law and the only people who are allowed to break it are those paid to enforce it.

Meanwhile, the couple’s 14-year-old son, who was sitting in the back with his seven-year-old sister, had begun recording after the cops drew their weapons, which is the only reason the couple is able to file a lawsuit for last month’s incident, which they did this week (click here to read lawsuit).

Otherwise, it would have been written off as another example of police trying to keep everybody safe, only to have to deal with dangerous citizens who refuse to wear seat belts or whatever.

In fact, Hammond police justified their aggression actions in a statement, pointing out that Johnson was also not wearing a seatbelt, so there you have it.

After all, as they proclaim on their website, they are only trying to provide “citizens the safest living environment possible.”