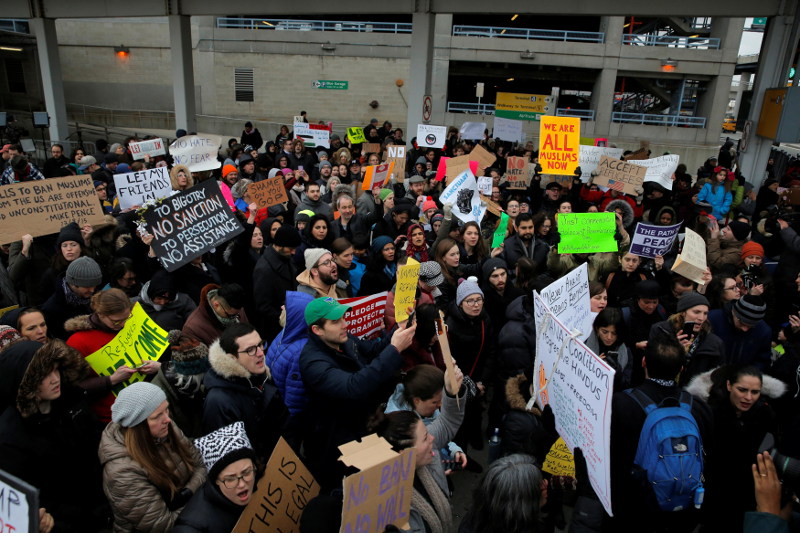 The federal court for the Eastern District of New York issued an emergency stay Saturday night to halt President Trump’s executive order banning entry to the US from seven countries, after massive protests broke out and the American Civil Liberties Union filed a lawsuit in response.

The ACLU announced that it would start litigation against Trump after he signed an executive order that would deny refugees entry into the U.S. from seven countries.

The order also called for “extreme vetting” to those allowed to enter the U.S. to “keep radical Islamic terrorists out of the United States of America.”

The ACLU filed a habeas corpus motion Saturday in a New York federal court on behalf of two detained Iraqi’s at the JFK airport who were threatened with deportation. The ACLU argued that Trump’s executive order was a violation of the law and was “unlawful.”

This lead to protests in front of the JFK airport, and a twitter campaign to help fund the ACLU’s lawsuit. Many influential people started tweeting that they would match donations to the ACLU.

help our queer & immigrant friends. send me your donation receipts for the @aclu & I will match up to $100K https://t.co/P9zVRH0WH0 #RESIST

The ACLU has since succeeded in stopping Trump. A federal court has issued an emergency stay halting President Trump’s travel ban the ACLU said according to Grasswire.

The ACLU advised anyone affected by the ban that they should not “sign any papers,” noting that their lawyers are stationed across various U.S. airports for those who need their assistance.

Lawyers are stationed at airports across U.S. If you know someone entering country, tell them not to sign anything before talking to lawyer

You can read ACLU’s full lawsuit against Donald Trump here.