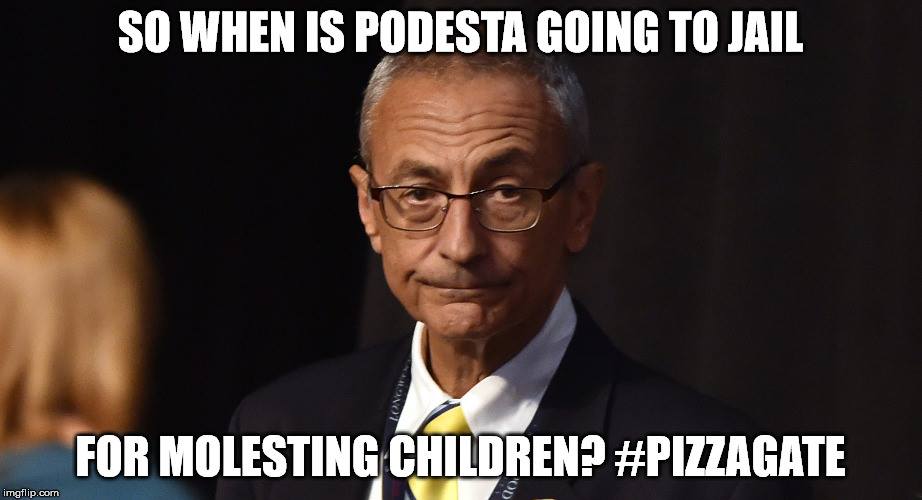 The alleged pedophile ring has been investigated for using Comet Ping Pong’s pizzeria to traffic children. Reddit users are now greeted with the message below when attempting to access to the sub-reddit.

“The subreddit was due to a violation of our content policy specifically the proliferation of personal and confidential information we don’t want a witch hunt on our site.”

Pizza gate was spawned after Reddit users and 4chan’s /pol/ users began digging through connections that James Alefantis, David Brock, Tony and John Podesta and various others had. Finding a number of disturbing images, research uncovered Tony Podesta’s secret stash of disturbing artwork allegedly. A full archive of the information that has so far been uncovered can be seen in this pastebin.

UPDATE: 7:50 P.M. EST – New York Times wrote an article featuring James Aefantis in which he called for the banning of this “fake information” and removal of all pictures. The NYTimes failed to mention a number of factors including the pedophile symbolism that researchers have found and pictures of children on comet ping pong’s Instagram. The Times – owned by Mexican billionaire Carlos Slim, Wall Street banks, and others elites potentially connected to this scandal – also failed to question Aefantis about a disturbing picture of a little girl taped down to a ping pong table and a YouTube video joking about pedophilia at Comet Ping Pong Pizzeria.

Additionally, the NYTimes failed to point out John and Tony Podesta’s connection, and Tony Podesta’s weird artwork under his house. The Times is calling everything in the Pizzagate investigation speculation by “conspiracy theorist.” The NYTimes attempted to say that every point that Wikileaks has brought up had been debunked, failing to even mention the Spirit Cooking emails that We Are Change reported on earlier this month. To sum it up, the NYTimes wrote another biased piece and this time to protect a potential pedophile ring by labeling an independent investigation as “Fake News.”

After employees and Mr. Alefantis complained to Reddit about how Comet Ping Pong was being targeted on the site, the #pizzagate discussion thread posted a warning that revealing personal information about individuals was prohibited.

THIS IS A BREAKING NEWS DEVELOPING STORY MORE DETAILS WILL BE ADDED AS THEY BECOME AVAILABLE INCLUDING ALL RESEARCH INTO PIZZA GATE.

The following research was first published by the Millenium Report:

JAMES ALEFANTIS: Can this possibly be his real name?

PIZZAGATE: It’s Much Worse Than You’ll Ever Know

The photo above captures James Alefantis (on the left), owner of the now notorious Comet Ping Pong Pizza parlor in Washington, D.C. and Tony Podesta, Beltway super-lobbyist and brother of Democratic heavyweight John Podesta.  According to many emails, Comet Ping Pong has been a favorite site for Clinton campaign events and Democratic social gatherings for many years. But why? Really?

Bear in mind that John Podesta is not only the ultimate Democratic powerbroker, Beltway insider and powerful political fixer, his professional resume is both long and deep in the U.S. Federal Government.  He was Bill Clinton’s White House Chief of Staff back in the 1990s, Barack Obama’s Counselor to the President, and Chairman of Hillary Clinton’s 2016 presidential campaign.

Why, then, is his relationship with James Alefantis so close (see his WikiLeaks emails), particularly in view of the extremely degenerate things that go on at Comet Ping Pong Pizza?

Citizen Journalism at its finest

Clearly the Fifth Estate is slowly emerging as the investigative arm of media worldwide. Not only has it overtaken the Fourth Estate years ago, it is producing citizen journalists (CJs) who are some of the best researchers and scandal sleuths on the Internet. The following comment that was left in the comment section of the Washington CITY PAPER is a great example of just how good some of the CJs have become.[1]

What needs to happen next for every CJ who reads this is to track down Mr. Alefantis’s real name; unless, of course, that is his real name.  In which case he seems to have a VERY fitting, yet grossly ironic, birth name.

What also needs to happens is that the lives of the heady Podesta brothers need to be DISSECTED.  Their comings and goings — around the entire globe — need to be scrutinized under the microscope of a super detective.  According to the many WikiLeaks and Anonymous emails which have been released, the Podestas many interconnecting relationship(s) and dubious entanglements go way deeper than just depraved campaign events at Comet Ping Pong.

For those who are uninitiated in this subject matter, PIZZAGATE is perhaps greatest scandal EVER to hit Washington, D.C.  From all the evidence gathered thus far, PIZZAGATE represents many scandals — SERIOUS scandals — all at once.  Child trafficking, Child sexual abuse, Child rape, and Child pornography have all been identified as possible activities which were engaged in and covered up by a massive pedophilia ring run out of Comet Ping Pong.

On a much darker side, there is also good reason to believe that infants and children may have been victimized whereby the perpetrators conducted organ trafficking, tissue harvesting, and blood harvesting.

PIZZAGATE: The Scandal That Will Take Down the Clintons, the Democratic Party and the U.S. Federal Government

Truly, if ever there was a political scandal that will rock the world, especially the D.C. political establishment, PIZZAGATE is it.

Additional research has been done by The Daily Sheeple.

We Are Change reported earlier this month on the Spirit Cooking scandal that rocked the world. Pizzagate might send some pedophiles to prison for good.