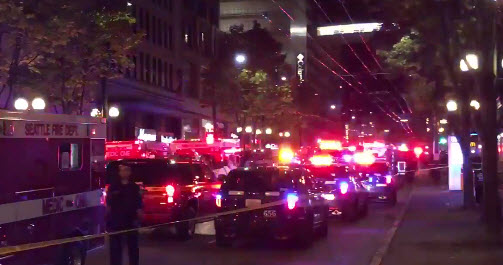 FIVE people were shot in Seattle in a mass shooting Wednesday night, the incident is reported as not being related to the Anti-Trump protest. Police have said that the shooting followed an argument that the suspect had with one or more of the victims.

“It appears that some type of argument took place. This individual began to walk away from the crowd, then turned and fired into the crowd,”

Three shots were fired at 3rd and pine according to Q13FOX reporter Jamie Tompkins who says she heard “three shots.” Although there were probably more to injure Five people.

I just heard shots fired on 3rd and Pine. Massive scene- I can see one person on the ground #Q13FOX pic.twitter.com/4LC7lAtZue

The other four victims, identified as one woman and three men, all sustained “non-life threatening wounds to the legs,” police said.

This follows as afternoon and evening protest erupted around the country refusing to accept the election of Donald Trump.

Video showed dozens of police and ambulances on the scene with at least two people transported to the hospital according to the Seattle Fire Dept.

The suspect is an unidentified male who fled the scene on foot still no word on what weapon was used, as of yet police are still investigating the scene.

Suspect is male. Merner says officers were on scene as soon as shots were fired. pic.twitter.com/m8fFlDxt3W

(THIS IS A DEVELOPING STORY, CHECK BACK FOR UPDATES.)