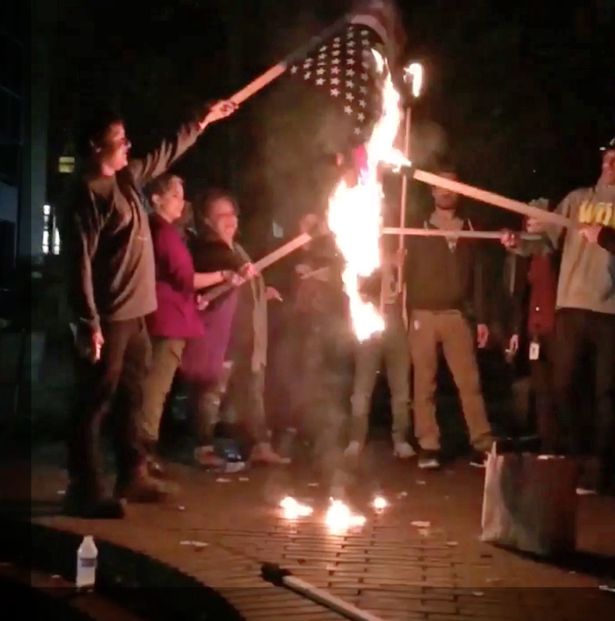 In response to Donald Trumps victory and becoming our 45th President, riots broke out across the U.S. of anti-Trump protesters after the announcement late mid morning with further protest and riots in the afternoon and evening spreading.

Anti-trump “not my president” protesters burned the American flag across the U.S. in several states in resentment of the elected President Donald Trump seen on pictures and video on social media.

Droves of angry protesters presumed to be mostly Hillary supporters have taken to streets across the U.S. chanting “Not Our President” while setting fires and smashing windows of cars, businesses etc. Graffiti was also used to deface property as we told you earlier today.

In Oregon, hundreds of people marched and blocked traffic in downtown Portland including some who sat in the middle of the road to impede traffic.

While in Pennsylvania, hundreds of University of Pittsburgh students marched through the streets,  chanting in unison “F*CK Donald Trump.”

In Seattle, a group of protesters gathered to block roads and set a trash bin on fire.

While LA, specifically Oakland was the most violent and destructive by far with police saying at least 500 people swarmed the streets in and around University of California, Berkley, Los Angeles, while others also shutdown highways and burned tires, dumpsters. There was also reports according to KTLA a local LA news station that said protesters burned a Trump Piñata.  Other students walked out in protest against Donald Trump according to ABC.

UPDATE 1:21 A.M. EST –  Anarchist have set fire to a federal building, and have smashed and set police cars on fire.

UPDATE: 2:14 A.M. EST – Trump protesters close down 101 Freeway in both directions in downtown, LA according to CBS Los Angeles.

In Austin hundreds of protesters took to the streets to protest Donald Trumps victory where things remained peaceful.

#protest outside of my work office #Austin pic.twitter.com/T0ya15Xg2i

In Chicago a sign reads “F*ck You and Your Fake Ass Toupe.” Later in the night Trump tower was flooded in Chicago with protesters taking over the streets.

In New York, anti-Trump  protesters flooded Union square across from Trump Tower to protest a Trump presidency.  As of 7P.M. EST the NYPD has threatened mass arrest at the protest according to PZF’s breaking news feed.

Early reports suggest that a few people have been arrested in Oakland while most states have remained peaceful.