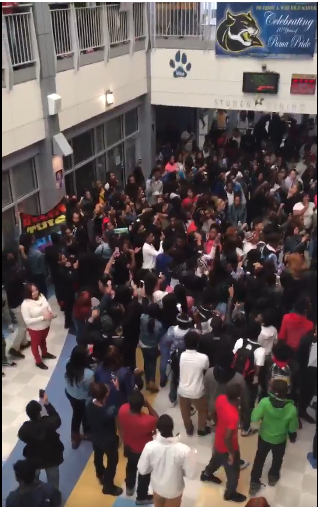 Students at Dr. Henry Wise High School in, Upper Marlboro, MD attempted a walk out in protest of President-elect Donald Trump when faculty and administrators locked them inside the school.

Social media is a buzz with reports from inside the school showing protesters sitting in a circle and outside the school showing a police presence. Students tried to stage a walk out protest when they were locked inside by the staff. This comes almost two years after Frederick Douglass High School students walked out and caused a riot at the Mondawmin Mall in Northwest Baltimore the day of Freddie Gray’s funeral.

Students chanted and one video shows a student saying “make wise trend.”Another video showed a protester holding a sign that read, “Damn Donald Back At It Again With The Racist.”

Parents were called and are expected to pick up their children with the principle Charoscar Coleman of the school  also threatening to arrest disorderly students.

Dr. Henry Wise High School isn’t the only school that has staged recent walkout protest several other high school and college students nationwide have been protesting the elect of Donald Trump by walking out it of their classes and chanting “not my president”. It’s been a mixture of peaceful protest and riots breaking out across the U.S. since the elect of Donald Trump as the new commander in chief.

(THIS IS A BREAKING NEWS STORY, AND WILL BE UPDATED AS NEW DETAILS EMERGE.)