Bush cancels Europe trip amid calls for his arrest 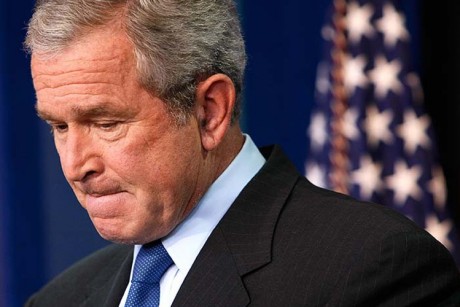 Will George W. Bush set foot in Europe again in his lifetime?

A planned trip by Bush to speak at the Switzerland-based United Israel Appeal later this week has been canceled after several human rights groups called for Swiss authorities to arrest Bush and investigate him for authorizing torture. Bush has traveled widely since leaving office, but not to Europe, where there is a strong tradition of international prosecutions.

The Swiss group and Bush’s spokesman claim that it was threats of protest, not of legal action, that prompted the cancellation. But facing protests is nothing new for Bush. What was different about this trip was that groups including Amnesty International and the Center for Constitutional Rights argued that Switzerland, as a party to the UN Convention against Torture, is obligated to investigate Bush for potential prosecution.

Amnesty’s memo to Swiss authorities cites, among other things, Bush’s admission in his own memoir that he approved the use of waterboarding. From Amnesty’s press release:

“To date, we’ve seen a handful of military investigations into detentions and interrogations in Iraq, Afghanistan, and Guantánamo. But none of these has had the independence and reach necessary to investigate high-level officials such as President Bush,” said Salil Shetty, Secretary General of Amnesty International.

“Meanwhile, there has been virtually zero accountability for crimes committed in the CIA’s secret detention program, which was authorized by then-President Bush.”

Anywhere in the world that he travels, President Bush could face investigation and potential prosecution for his responsibility for torture and other crimes in international law, particularly in any of the 147 countries that are party to the UN Convention against Torture.

“As the US authorities have, so far, failed to bring President Bush to justice, the international community must step in,” said Salil Shetty.