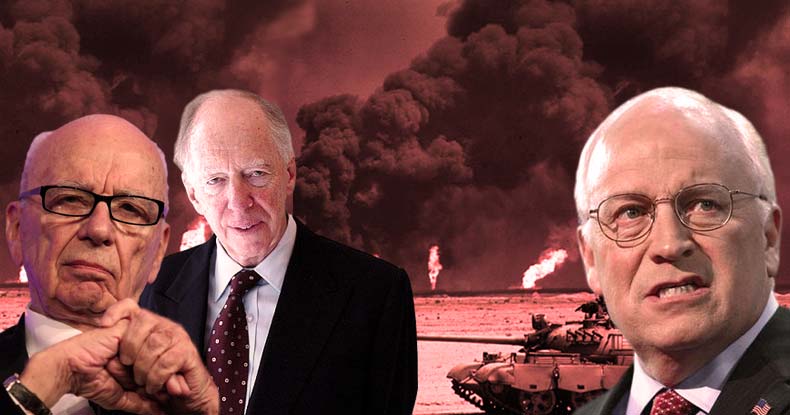 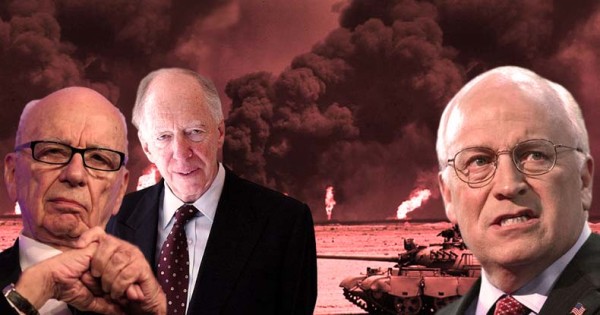 While Syria is torn apart by the warring of U.S. imperialists and Islamic fundamentalists—leaving its children to die of starvation—another country plans to take advantage of the chaos by stealing resources from Syria’s southern region. The theft will be carried out by the most notorious pushers of military hegemony, and they don’t care that it violates international law.

Genie Energy is an American-based oil and gas company with major investors and advisors comprising a who’s who list of war profiteers—Dick Cheney, Rupert Murdoch, Lord Jacob Rothschild, and James Woolsey. The president of their Israeli subsidiary is Efraim “Effi” Eitam, an Israeli military commander who called for expelling the “cancer” of Arabs from Israel.

Together, these warmongers and would-be ethnic cleansers will soon be drilling into a vast oil and gas reserve located in the Syrian territory occupied by Israel since 1967, known as Golan Heights. The move would be in clear violation of international law, specifically the Annex to the Fourth Geneva Convention.

Israel has benefited from its illegal occupation of Syria’s Golan Heights for decades, drawing one-third of its entire water supply from the region and providing a tourist and skiing destination at the Mount Hermon Ski Resort. Despite persistent international pressure, including from the U.S., the occupation continues and will reach a new level with the extraction of fossil fuels.

Rupert Murdoch heralded his involvement in Genie Energy by touting the prosperity and freedom it will bring to the world.

“Covering and distributing news has been my life’s work,” said Mr. Murdoch. “If Genie’s effort to develop shale oil is successful, as I believe it will be, then the news we’ll report in the coming decades will reflect a more prosperous, more democratic, and more secure world.”
Of course, the war-stricken, starving, desperate people of Syria will never see a shred of that prosperity and security. Murdoch’s Fox “news” channel has been instrumental in pushing war in the Middle East and obfuscating the role played by the U.S. in fomenting the Syrian war, and soon he and his cronies will be reaping the profits.

While they make plans to steal energy resources from illegally occupied Syria, Genie Energy engages in publicity stunts to pre-empt the criticism that will undoubtedly follow. Last Christmas they donated coats and toys to needy families in Newark, New Jersey.

Drilling in Golan Heights is also drawing concerns about its impact to drinking water supplies. Since the reserves are locked up as shale oil, hydraulic fracturing (fracking) would likely be used to extract the fossil fuels. The shale oil is in close proximity to a large aquifer which supplies drinking water to the region; the fracking chemicals and polluted water spilled onto the ground could contaminate this water supply. A temporary restraining order was issued by the Israeli High Court in 2014, but did not last long as moneyed interests won out.

Momentum for the illegal oil drilling of Syrian territory by Murdoch, Cheney and the gang is aided by the assumption that Golan Heights is already part of Israel. Afek Oil and Gas refers to their newfound field simply as “northern Israel.” A prominent Israeli politician, Naftali Bennett, in 2015, called for the world to recognize Golan Heights as Israeli territory, while calling for the expansion of Jewish settlers in the region.

“I want to challenge the entire world,” said Bennett at the 15th annual Herzliya Conference of the Institute for Policy and Strategy. “I want to give the international community an opportunity to demonstrate their ethics. Recognize Israeli sovereignty over the Golan Heights.”

Dick Cheney, Rupert Murdoch, Jacob Rothschild, and their henchmen have a long tradition of promoting war in the Middle East and exploiting its oil resources. The cabal formed under Genie Energy, led by the unapologetic Arab hater Effie Eitam, appears to have nothing standing in the way of their next conquest in Syria’s Golan Heights.
Read more at http://thefreethoughtproject.com/cheney-murdoch-rothschild-drill-oil-reserves-syrian-occupied-territory-violate-international-law/#Of24FOfre6gRPs2d.99