College student uses coupon-clipping skills to donate over $110,000 to charities 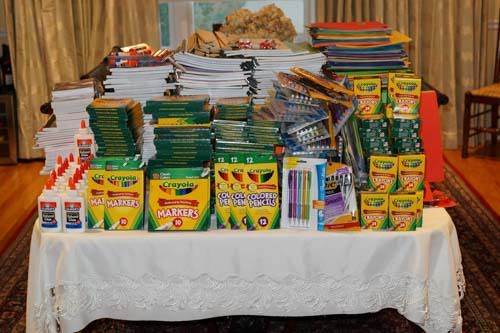 At the age of 10, Hannah Steinberg not only saved up $300 to buy a real cash register, but she also used it to keep track of her money.

Fast forward 10 years, and the 20-year-old Tufts University student from Scarsdale, New York, is collecting coupons to put toward buying items for charities.

Hannah Steinberg clips coupons to help donate items to charities
Courtesy of Hannah Steinberg
Hannah Steinberg with her coupons and items she bought
After becoming hooked on the show “Extreme Couponing” when she was 14 years old, Steinberg decided to apply her interest in couponing to a good cause.

“These people [on the show] have mounds and mounds of items in their garages, so I thought I’d try and see if I can do something with this to give back,” she told TODAY.com.

She started looking through circulars and cutting coupons that she took to stores like Target and CVS, along with $500 she had saved up from baby-sitting. Before she knew it, she had enough toiletries, canned goods and gift cards to take to the Coachman Family Center, a local homeless shelter.

“My parents thought I was crazy at first, but once I showed them and everyone else how much $500 and coupons could get you, they realized I was on to something,” Steinberg said. “They’re now so supportive that they let me take over the dining room table and garage.”

She sent a photo of all the items to family and friends with a note about what she was doing, and donations started to pour in. People even gave her 20-year-old coupons that are still effective.

Hannah Steinberg clips coupons to help donate items to charities
Courtesy of Hannah Steinberg
Steinberg with the items she bought from coupons
Since going off to college, Steinberg has found it hard to balance both her schoolwork and couponing, so many of her friends have gotten involved with cutting coupons, filling up carts and even accompanying her on monthly trips to drop the items off.

Our Coupons Care officially became a nonprofit in October of 2014 and has donated over $110,000 worth of goods to homeless shelters and hospitals.

Her biggest deliveries come around the holidays, but her latest back-to-school delivery was the best yet, with more than 100 packages of Crayola crayons, 200 packages of markers and hundreds of notebooks and backpacks.