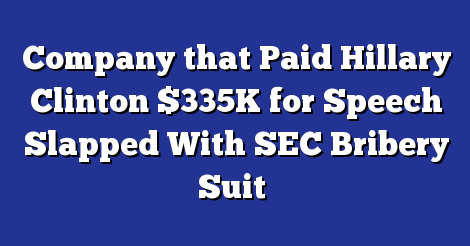 A tech company that paid Hillary Clinton $335,000 to give a speech in 2014 settled a dispute last week with the Securities and Exchange Commission, which claims the corporation repeatedly bribed foreign political officials to promote its products and gain a business advantage.

Qualcomm, a wireless telecommunications company based in San Diego, paid $7.5 million to settle the SEC probe. In a statement announcing the settlement last week, the commission accused the company of violating the Foreign Corrupt Practices Act between 2002 and 2012 by hiring unqualified relatives of Chinese officials and providing them with luxury gifts that had “no valid business purpose.”

These allegations were echoed in a civil lawsuit filed by Qualcomm’s shareholders last month, which also accused the company’s executives of defrauding investors.

Clinton spoke at Qualcomm’s Wireless Reach conference in October 2014. Critics noted that the $335,000 speech payment was more than Bernie Sanders’s entire net worth.

According to Qualcomm’s website, Clinton’s address “captivated” the audience and focused on “the importance of empowering girls and women to believe they can succeed in any field.”

Qualcomm has also worked closely with the Clinton Global Initiative, and contributed between $100,000 and $250,000 to the Clinton Foundation. The company’s co-founder, Irwin Jacobs, is a major fundraiser for Hillary Clinton’s campaign and Super PAC. Jacobs retired from Qualcomm’s board in 2012, and he is not named as a defendant in the civil suit.

The ongoing civil suit by Qualcomm shareholders claims that the company’s stock prices were artificially inflated because executives failed to correct false and misleading statements about the firm’s business prospects. It also “seeks to remedy damages caused to the Company by the Individual Defendants’ violations of the Foreign Corrupt Practices Act.”

The SEC settlement did not include an admission or denial from Qualcomm.

“From 2002 through 2012, Qualcomm provided things of value to foreign officials … to try to influence these decision makers to favor and/or promote Qualcomm-developed technology in an evolving international telecommunications market, thereby providing Qualcomm with a business advantage,” said the SEC.

The Clinton campaign did not respond to a request for comment.