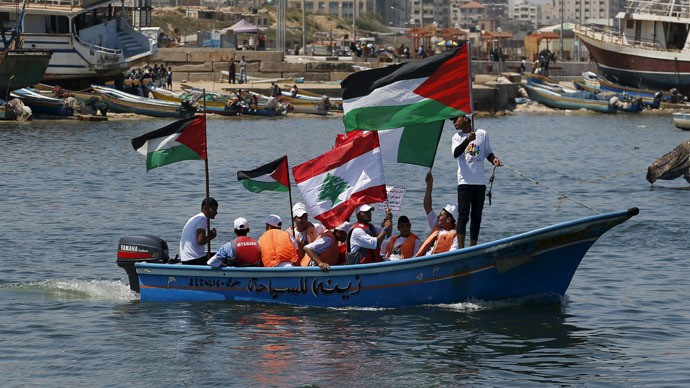 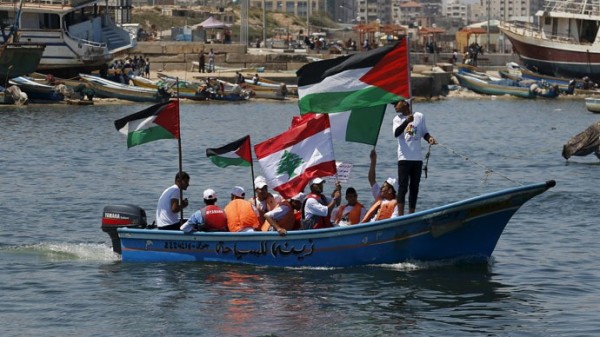 (beforeitsnews.com) Palestinians hold flags as they ride a boat during a rally marking the 5th anniversary of the Mavi Marmara Gaza flotilla incident, at the seaport of Gaza City May 31, 2015. (Reuters/Suhaib Salem)
Contact has been lost with the Swedish boat Marianne, which had been leading the Gaza-bound Freedom Flotilla, after other boats turned back. The IDF announced that they intercepted and searched the vessel which had tried to “breach the maritime blockade.”

The Freedom Flotilla Coalition lost contact with the flagship of the flotilla at 10:57pm GMT, the organization said. The vessel was some 100 nautical miles from its destination at when it happened.

The Israeli navy has engaged the vessel, boarded and searched it, the Israeli Defense Forces’ spokesman Peter Lerner confirmed. He said the Marian is now being escorted to Ashdod Port after ignoring “repeated appeals to change course.”

Earlier, the Coalition confirmed that three vessels which are part of the flotilla turned back to their ports of origin, as was part of the original plan.

“The three sailing boats accompanying and supporting the “Marianne” (“Rachel”, “Vittorio” and “Juliano II”) are changing their course and will be heading back to their ports of origin,” it announced.

“Political representatives, journalists, peace activists on board, a total number of 29 sailors, have assisted the Marianne and its people towards their long and difficult journey, which has always remained to end the illegal and inhumane blockade of Gaza.”

The four vessels which departed from various ports in Greece on Saturday attempted to break the eight-year long Palestinian blockade, a news release on the campaign’s official webpage said. This time, some 70 people were on board, including former Tunisian President Moncef Marzouki and Spanish MEP Ana Maria Miranda Paza.

Israeli officials said on Sunday they would not allow the boats to reach the shores of Gaza.

“The Foreign Ministry and all other relevant bodies, mostly the IDF (Israel Defense Forces) and the Prime Minister’s Office, are fully prepared for the arrival of the flotilla. We are ready for every possible scenario,” the ministry’s spokesperson Emmanuel Nahshon said on Sunday, as quoted by The Times of Israel.

“It won’t reach Gaza,” he announced. “The State of Israel won’t let that happen,” the official said, adding that the organizers of the flotilla have themselves declared their aim to be the breakage of Israel’s naval blockade of Gaza, which Jerusalem says “is legal according to international law.”

In 2011, a report by a UN investigative committee implied that Israel has the right to stop Gaza-bound vessels, The Times of Israel reported. On Wednesday, UN Secretary-General Ban Ki-moon said he believed “a flotilla will not help to address the dire situation in Gaza,” but urged Israel to “lift all closures, with due consideration of Israel’s legitimate security concerns.”

While Israel says the blockade is intended to prevent Hamas from getting weapons and other materials that could potentially be used to attack it, the flotilla allegedly only had humanitarian aid set to be delivered to the people of Gaza.

There are other “acceptable and accessible” ways for Palestinians-addressed help in Gaza, Nahshon said, adding that “if they [the flotilla] want to make a statement to break the blockade, we won’t allow that.”

A number of politicians and activists in Israel do not support such uncompromising position, arguing that the flotilla is peaceful and poses no danger to the country’s security. Sending in troops could further seal Israel’s image as an “aggressor,” The Times of Israel said, citing a former Knesset member and prominent far-left activist Uri Avnery.

In 2010, a similar attempt to break the blockade with the “Freedom Flotilla” ended in bloodshed. Israeli troops then boarded a Gaza-bound vessel in international waters. Nine pro-Palestinian activists made a stand against the military with rods and knives, with the clashes having resulted in the deaths of the flotilla team members.