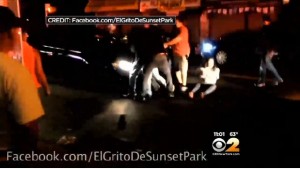 This week, cellphone video appeared online showing NYPD officers assaulting a pregnant woman, throwing her to the ground, and using a taser on her belly.

The altercation allegedly began when police interrupted the family from eating dinner without reason and without a warrant, and lured them out of a Brooklyn restaurant.

When on the street, police reportedly planted a knife on 17-year-old John Lemos and threatened to take him to jail.  According to the family, they have a history with these specific officers, and they believe that the officers were attempting to frame Lemos because they had a grudge against him.  Either way, carrying a knife in a big city should not be a crime to begin with, and the police had no legal reason to interrupt this family’s dinner.

Lemos’s mother was witness to the entire ordeal, and when she attempted to defend her son she was viciously attacked by the officers.  When police began to get rough with the woman, onlookers took out their cellphone cameras and began to record the incident.  The officer in the video can be seen throwing the woman to the ground, straddling her body while her stomach was pressed against the concrete, and then seconds later using a taser on her belly.

Days later, she reported that she was still in pain and that there was still a visible burn mark on her abdomen from the taser.

At some point during the scuffle, 17-year-old Lemos was assaulted by police as well, and sustained multiple injuries to his head and face.

Dennis Flores, from the local police watch group El Grito de Sunset Park, released one of these videos to the public and talked to local reporters about the attack.

“It was disgusting what we saw…You know, how can you treat a human being this , you know, an innocent child in the belly? Unfortunately, this type of stuff keeps repeating itself, these officers are acting with, like, immunity. They have a license to hurt people and there’s no accountability,” Flores said.

After the literal ambush and assault that was staged by these NYPD officers, Lemos was charged with criminal possession of a weapon, resisting arrest and harassment, while his mother, the pregnant woman who was assaulted, was charged with disorderly conduct.

John Vibes is an author, researcher and investigative journalist who takes a special interest in the counter culture and the drug war. In addition to his writing and activist work he is also the owner of a successful music promotion company. In 2013, he became one of the organizers of the Free Your Mind Conference, which features top caliber speakers and whistle-blowers from all over the world. You can contact him and stay connected to his work at his Facebook page. You can find his 65 chapter Book entitled “Alchemy of the Timeless Renaissance” at bookpatch.com.