US ambassador to UN admits the plan is to overthrow Assad 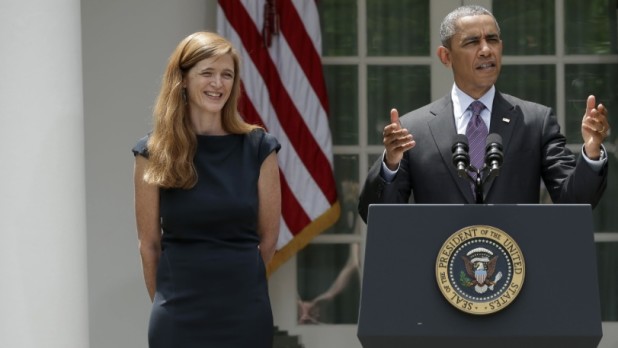 Editor’s note: the UK and US governments failed to get public and parliament/congress approval for war with Syria earlier this year with the chemical attacks which later turned out to be a false flag.
http://friendsofsyria.co

So now they rebranded al qaeda to ISIS and are using it as the excuse to go inside Syria without approval from Assad to fight the very people they fund, arm and train in the first place.

Obama’s United Nations ambassador Samantha Power told Chuck Todd of NBC on Sunday the real purpose of the fight against ISIS is to overthrow al-Assad and the Syrian government.

Power said the “moderate” Free Syrian Army (FSA) will receive an “infusion of support” in its battle against both ISIS and the Syrian government which is, according to Power and the United States, “backed by Hezbollah, Iran, Russia, etc.”

Omitted from the discussion is the fact ISIS, al-Nusra and the FSA have merged forces.

“We are collaborating with the Islamic State and the Nusra Front by attacking the Syrian Army’s gatherings in… Qalamoun,” Bassel Idriss, the commander of an FSA-aligned rebel brigade, told the Lebanese Daily Star earlier this month.

The FSA has lost troops to al-Nusra and other hardcore Islamist groups for more than a year.

In June al-Nusra and ISIS joined forces at Albu Kamal in Syria and al-Qaim in Iraq.

“Fighters feel proud to join al-Nusra because that means power and influence,” Abu Ahmed, the commander of an FSA brigade near Aleppo, told The Guardian in May of 2013.

In September, 2013, one of the largest FSA brigades, the 11th Division, joined al-Nusra.

“This means that the FSA has suddenly lost serious amounts of loyal fighters… it’s basically being swallowed up by Nusra,” an Al Jazeera correspondent in Antakya, Turkey, reported on September 21, 2013.

Reuters, citing sources inside Syria, reported other members of the FSA have joined ISIS.

The Ahl al-Athar, Ibin al-Qa’im, and Aisha factions within the FSA pledged allegiance to ISIS in July, according to Zaman Alwasl, a newspaper based in Homs.

“Al Nusra Front and the state [ISIS] will fully control FSA brigades, fusing them within their extreme and Jihadi ideologies,” the newspaper reported.

Obama and Power are attempting to keep the illusion alive that there is a distinction between al-Nusra, ISIS and the FSA when in fact all are creations of U.S., British and Israeli intelligence.

On Sunday The New York Times carried a report saying Iraqis – from people on the street to officials in the highest level of government – believe the CIA is behind ISIS. They fear the manufactured ISIS threat will be used to reintroduce troops in Iraq.

Al-Naameh said two deputies of Robert Stephen Ford, the former U.S. ambassador to Syria, also attended the meeting. It was decided al-Nusra and the FSA would cooperate in the proxy war to depose al-Assad and turn Syria into a failed state like Iraq and Libya.

Ford played a key role in orchestrating the Syrian “resistance” and was and underling to Iraq ambassador John Negroponte, who during his tenure organized death squads in Iraq in a coordinated effort to destabilize the country.

“Since the opening of a new US base in the desert in southwest of Jordan in November 2012… CIA operatives and US special operations troops have covertly trained the militants in groups of 20 to 45 at a time in two-week courses,” al-Alam reported.

Previously the German newspaper Der Spiegel reported Americans training “Syrian rebels,” although it was not clear if the Americans worked for private firms or were with the U.S. Army.

source with video of interview