“Coup Has Started”: Whistleblower’s Attorney Vowed to “Get Rid of Trump” in 2017 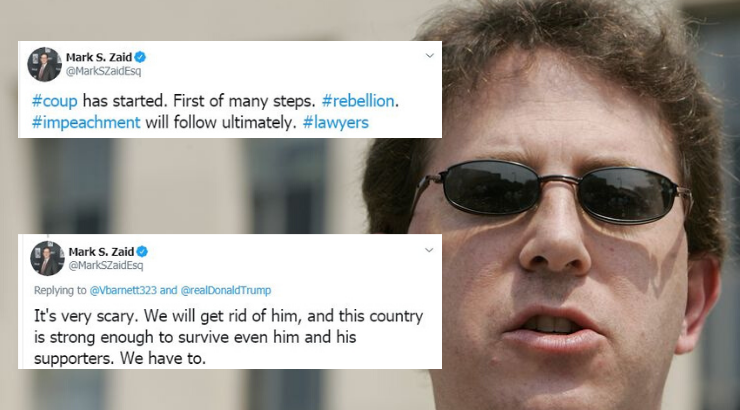 The attorney representing the CIA whistleblower vowed to “get rid of Trump,” and said that the “#coup has started” in 2017 tweets.

Mark Zaid, the John Podesta, Clinton and Schumer-linked attorney who founded the anti-Trump nonprofit ‘Whistleblower Aid’ in 2017, tweeted “It’s very scary. We will get rid of him, and this country is strong enough to survive even him and his supporters. We have to.”

He also bragged about his connections to John Podesta with an organization he set up for litigation.

He also tweeted “#coup has started” after former AG Sally Yates was fired for “refusing to enforce a legal order” from Trump.

Is that the same attorney who repeatedly tweeted "coup has started" and "we will get rid of [Trump]" before his client filed a false complaint that concealed his contacts with House Democrats? https://t.co/rWfVNR2gLH

This is The Whistleblower’s Attorney:

As Fox News reports, Zaid remarked in July 2017 “I predict @CNN will play a key role in @realdDonaldTrump not finishing out his full term as president.”

The posts, which came shortly after President Trump fired then-acting Attorney General Sally Yates for failing to defend federal laws in court, are likely to fuel Republican concerns that the whistleblower’s complaint is tainted with partisanship.

“The whistleblower’s lawyer gave away the game,” the Trump campaign’s communications director, Tim Murtaugh. told Fox News. “It was always the Democrats’ plan to stage a coup and impeach President Trump and all they ever needed was the right scheme. They whiffed on Mueller so now they’ve settled on the perfectly fine Ukraine phone call. This proves this was orchestrated from the beginning.”

Trump has repeatedly accused Democrats and partisans in the intelligence community of effectively plotting a coup against him, through selective leaks and lengthy investigations. –Fox News

“45 years from now we might be recalling stories regarding the impeachment of @realDonaldTrump. I’ll be old, but will be worth the wait,” he tweeted in June 2017.

Whistleblower Aid was founded in September 2017 in the wake of Trump’s presidency to encourage government whistleblowers to come forward.

The group did not sit around waiting for whistleblowers. Upon its founding, Whistleblower Aid actively sought to attract the attention of Trump administration government employees by reportedly blasting advertisements for its whistleblower services on Metro trains, using mobile billboards that circled government offices for 10 hours a day, and handing out whistles on street corners as a gimmick to gain attention.

When Whistleblower Aid was first formed, the main banner for the mission statement of its website contained clearly anti-Trump language.

“Today our Republic is under threat. Whistleblower Aid is committed to protecting the rule of law in the United States and around the world,” read the previous statement which can still be viewed via the Internet Archive Wayback Machine. –Breitbart

Zaid is also founder and director of the James Madison Project, which still lists John Podesta as a member of its board in a hidden area of the website (archive here).