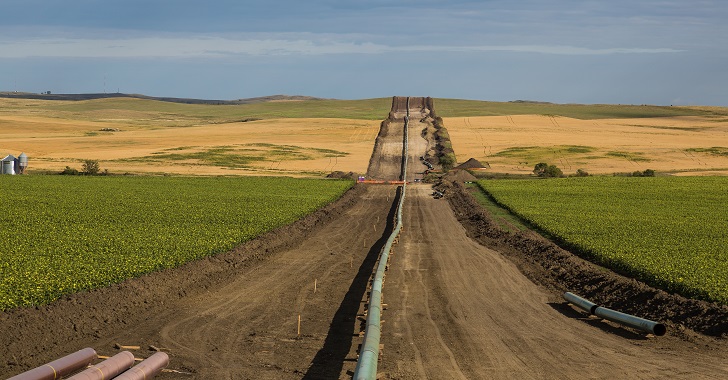 With oil slated to begin flowing through the Dakota Access Pipeline (DAPL) within weeks or even days, another attempt to block the controversial pipeline has been squashed. On Tuesday, a federal judge in Washington D.C. denied a request from the Cheyenne River Sioux tribe to halt the construction of the pipeline based on religious grounds.

The DAPL, alternatively known as the Bakken Pipeline, is owned by Dallas, Texas-based corporation Energy Transfer Partners, L.P., which created the subsidiary Dakota Access LLC. The pipeline will stretch 1,172 miles upon completion and transport crude oil from the Bakken fields of North Dakota to Patoka, Illinois. The project is set to cross the Missouri River not far from the Standing Rock Sioux Reservation in North Dakota. The Oceti Sakowin, Sacred Stone, and Red Warrior camps were formed in opposition to the pipeline due to threats to sacred sites and the Missouri River.

U.S. District Judge James Boasberg issued a 38-page ruling denying the Sioux’s request after examining the claims that the DAPL was the fulfillment of tribal prophecy about the rise of a “black snake” that would destroy Lakota homeland and poison the environment. The Cheyenne River Sioux argued that the presence of oil flowing underneath Lake Oahe would cause damage to sacred sites. Boasberg disagreed with the Sioux’s arguments, stating that, “only once Dakota Access had built up to the water’s edge and the Corps had granted the easement to proceed did Cheyenne River inform Defendants that the pipeline was the realization of a long-held prophecy about a Black Snake and that the mere presence of oil in the pipeline under the lakebed would interfere with the Tribe’s members’ ability to engage in important religious practices.”

According to Boasberg, this meant the tribe waited too long to raise a claim under the Religious Freedom Restoration Act. Courthouse News reports:

“Though the tribe did tell the Army Corps of Engineers that the pipeline could affect sacred sites, which included water, it failed to specifically address religious issues, according to the ruling.

“There is no mention of the black snake prophecy, the court found, in a 2016 declaration that the Cheyenne’s environmental director and research specialist filed when the tribe joined the Standing Rock Sioux Tribe’s motion for preliminary injunction.”

Boasberg also stated that the tribes failed to mention that, from their religious perspective, the presence of oil flowing would taint the water. “The court, accordingly, concludes that defendants have shown that the tribe inexcusably delayed in voicing its RFRA [Religious Freedom and Restoration Act] objection,” he ruled. The judge also stated that the prophecy claims are questionable because there was not a clear record of whether the prophecy was made before the creation of Lake Oahe nearly 60 years ago, nor was it apparent why the tribe did not fight the creation of railroads and other pipelines crossing the area.

Nicole Ducheneaux, an attorney for the Cheyenne River Sioux Tribe, told Courthouse News that the ruling is another example of “a continued misunderstanding of American Indian religious beliefs and principles by the United States and its institutions.“ Ducheneaux stated that the legal battle was not over, but was instead a part of “a much broader legal fight against the Corps’ authorization of this pipeline under the sacred waters of the Missouri River.”

Despite the judge’s comments, the project has been opposed on cultural, spiritual, and historical grounds by a great number of professionals from a variety of fields. In October 2016, a group of more than 100 scientists from universities across the United States and other regions issued an open letter warning about the dangers of the pipeline. Published in the journal Science, the letter was authored by Stephanie Januchowski-Hartley (PhD, Universite Paul Sabatier in France), Anne Hilborn, PhD Candidate at Virginia Tech) Katherine Crocker (PhD Candidate at University of Michigan), and Asia Murphy (PhD candidate at University of Pennsylvania).

“We as scientists are concerned about the potential local and regional impacts from the DAPL, which is symptomatic of the United States’ continued dependence on fossil fuels in the face of predicted broad-scale social and ecological impacts from global climate change,” the letter stated. “We support halting any construction of the DAPL until revised environmental and cultural assessments are carried out as requested by Standing Rock Sioux Tribe. ”

Only weeks before that letter was issued, opponents of the pipeline also garnered support from a coalition of more than 1,200 archaeologists, museum directors, and historians. The coalition spoke to the United Nations and condemned the destruction of sacred sites during the construction of the pipeline. Ultimately, the letters of support and condemnation did not stop the march of the DAPL.

In early February, the U.S. Army Corps of Engineers announced they had concluded their review of the Dakota Access Pipeline and would approve the final easement under Lake Oahe. The Corps will grant the easement for 30 years. The easement, which has been the center of resistance and conflict since last summer, is slated to go under Lake Oahe near the Standing Rock Sioux reservation.

This decision reverses a previous decision made during the Obama administration that called for exploring alternative routes and conducting an Environmental Impact Statement (EIS). Beginning January 18, the Corps began collecting public comments regarding the easement. The rejection of the EIS and approval of the easement under Lake Oahe came after President Donald Trump signed executive actions to advance construction on January 24.

Following the decision, Dallas Goldtooth — the son of Tom Goldtooth with Indigenous Environmental Network — called on water protectors to continue campaigns of divestment to protest Army Corps of Engineer offices, the banks, and other crucial points of support for the pipeline around the United States. Goldtooth also called for pipeline opponents to stop the pipeline at all costs, whether or not they can make it to Standing Rock.

As many supporters of the Standing Rock Sioux, the Cheyenne River Sioux, and other water protectors have stated, the fight against the DAPL and against unsustainable, destructive technologies and fuels is far from over. The movement reignited native activist movements from around the world and helped many observers come to understand that the fight for the planet and the scarce resources is bigger than just one group of people or ideal. It is a cause that has the power to unite people of all colors, nations, tribes, and backgrounds. Where the movement for a healthy planet and a world free of statism goes from here depends on each of us.

This article first appeared on TheAntiMedia.org and was authored by Derrick Broze.