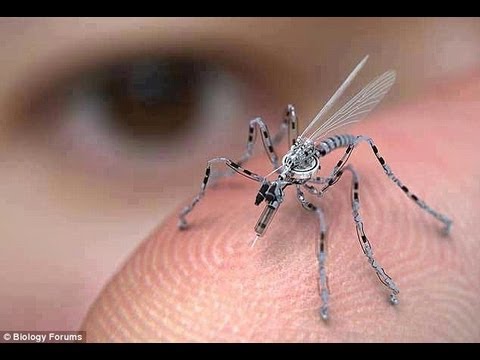 As drone expert, P.W. Singer said, “At this point, it doesn’t really matter if you are against the technology, because it’s coming.” According to Singer, “The miniaturization of drones is where it really gets interesting. You can use these things anywhere, put them anyplace, and the target will never even know they’re being watched.”

This has been the promise that the Air Force made quite clear in their video early last year about nanodrone tech that you can see below. According to the USAF, Micro Air Vehicles (MAVs), combined with the ability to harvest energy, will enable insect-sized drone swarms to be dropped from military aircraft to stay aloft for a prolonged amount of time, offering a host of functions, including assassination.

DARPA is now announcing a new wave of these microdrones under the Fast Lightweight Autonomy program. As the name indicates, they ideally would like humans to be completely removed from the control process.

For now, they clearly state “overseas” as the theater of operation, but it doesn’t take much imagination to see how these microdrones could be applied in the U.S., especially amid an increasingly tense urban environment in the wake of confrontations with domestic police. And, as always, the tantalizing application in disaster relief paves the way for easy introduction.

DARPA aims to give small unmanned aerial vehicles advanced perception and autonomy to rapidly search buildings or other cluttered environments without teleoperation.

Military teams patrolling dangerous urban environments overseas and rescue teams responding to disasters such as earthquakes or floods currently rely on remotely piloted unmanned aerial vehicles to provide a bird’s-eye view of the situation and spot threats that can’t be seen from the ground. But to know what’s going on inside an unstable building or a threatening indoor space often requires physical entry, which can put troops or civilian response teams in danger.

To address these challenges, DARPA issued a Broad Agency Announcement solicitation today for the Fast Lightweight Autonomy (FLA) program. FLA focuses on creating a new class of algorithms to enable small, unmanned aerial vehicles to quickly navigate a labyrinth of rooms, stairways and corridors or other obstacle-filled environments without a remote pilot. The solicitation is available here: http://go.usa.gov/MGWx

The program aims to develop and demonstrate autonomous UAVs small enough to fit through an open window and able to fly at speeds up to 20 meters per second (45 miles per hour)—while navigating within complex indoor spaces independent of communication with outside operators or sensors and without reliance on GPS waypoints.

“Birds of prey and flying insects exhibit the kinds of capabilities we want for small UAVs,” said Mark Micire, DARPA program manager. “Goshawks, for example, can fly very fast through a dense forest without smacking into a tree. Many insects, too, can dart and hover with incredible speed and precision. The goal of the FLA program is to explore non-traditional perception and autonomy methods that would give small UAVs the capacity to perform in a similar way, including an ability to easily navigate tight spaces at high speed and quickly recognize if it had already been in a room before.

If successful, the algorithms developed in the program could enhance unmanned system capabilities by reducing the amount of processing power, communications, and human intervention needed for low-level tasks, such as navigation around obstacles in a cluttered environment. The initial focus is on UAVs, but advances made through the FLA program could potentially be applied to ground, marine and underwater systems, which could be especially useful in GPS-degraded or denied environments.

“Urban and disaster relief operations would be obvious key beneficiaries, but applications for this technology could extend to a wide variety of missions using small and large unmanned systems linked together with manned platforms as a system of systems,” said Stefanie Tompkins, director of DARPA’s Defense Sciences Office. “By enabling unmanned systems to learn ‘muscle memory’ and perception for basic tasks like avoiding obstacles, it would relieve overload and stress on human operators so they can focus on supervising the systems and executing the larger mission.”

Since the focus of the program is improving perception and reducing dependence on external sources—as opposed to designing new small UAVs—DARPA will provide performers selected for the program with the same small UAV testbed as government-furnished equipment.