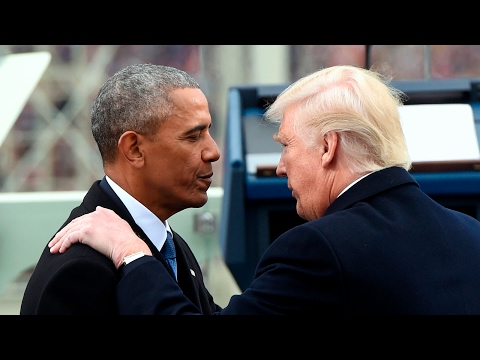 As an unprecedented wave of outrage swells against the Trump administration, Mnar Muhawesh, host of ‘Behind the Headline,’ wonders why people weren’t more outraged with Obama’s policies on mass surveillance, whistleblowers, and war.

Remember our former commander in chief — Barack Obama? Well he’s on vacation. After eight years in the Oval Office, he’s decided to unwind with billionaire Richard Branson. His recent kitesurfing adventure seems to be the only news item competing with President Trump’s “Muslim ban” and the opposition to it and the contentious confirmation of Betsy DeVos as Education secretary.

Attention is turning to Obama’s post-presidency antics as we move further into the Trump administration.

The weekend that Trump took the oath of office, this country saw the largest political mobilization in U.S. history. And with each passing day of his presidency many Americans are growing increasingly outraged by the actions of the real estate mogul-turned reality TV-star-turned commander in chief.

And while the Democratic Party and the establishment left mourn Obama’s exit from the White House, they’re warning that we’ve entered a period of fascism in U.S. history. Hundreds of thousands of Americans have taken to the streets in protest. They’re also mobilizing online and over the phone in a swell of engagement and outrage that seems unprecedented in recent memory.

And to a certain point their outrage is justified: Our president is a man who campaigned on a platform of bigotry.

He drove racism, Islamophobia, misogyny, and xenophobia into the mainstream, railing against political correctness and bringing into stark contrast the deep divisions among us.

Trump is waging war on the media and issuing orders that put a blanket ban on people from seven Muslim-majority countries — nations that have been a target of U.S. imperialism and destabilization for more than 30 years. These orders are illegal, unconstitutional, and, frankly, morally reprehensible.

He could even breach international law if the U.S. Embassy in Israel is moved from Tel Aviv to occupied East Jerusalem, as he recently gave the green light for Israel to do so.

Trump has put Iran “on notice” — whatever that means — for an attack on the U.S. Navy which the Islamic Republic never committed. This has driven the United States into the closest military confrontation with Iran since 1979.

Millions of people gathered around the world in Women’s March protests the day after the inauguration. But as these protests swelled, one perhaps couldn’t help but wonder why there wasn’t any mobilization even remotely on this scale in the previous eight years during Obama’s presidency.

Perhaps it’s not too late to remind those who blindly followed the former “commander in cool,” who stamped each of his authoritarian policies with the platitudes of “Hope” and “Change,” of just how Trump’s new policies wouldn’t be possible without the full dictator’s toolkit that Obama and the Democratic Party prepared for him.

It was Obama who dropped more than 26,000 bombs on foreign soil — and that was just in 2016. It was Obama who destabilized and destroyed the very countries these victims of war are fleeing. And it was Obama who simultaneously approved arms sales to terror groups and dictatorships while expanding the war on terror.

It was Obama who expanded Bush’s drone war — a practically invisible war in which thousands of people have been killed without trial. Worse yet, many of those killed in drone strikes in countries like Yemen, Pakistan, Somalia and Afghanistan, have been civilians whose only “crime” was being in the wrong place at the wrong time.

It was Obama who gave Israel a record rate of $6 billion in military aid,  more than any other administration in US history, emboldening the apartheid colony.

It was Obama who waged an unprecedented war on whistleblowers. During Obama’s presidency there were eight prosecutions under the 1917 Espionage Act — that’s more than double those under all previous administrations combined.

It was Obama who continued to expand executive powers — including the ability to declare war unilaterally, meaning a president wouldn’t need congressional approval– that had already been dramatically expanded under the George W. Bush administration.

It was Obama who expanded Bush’s surveillance state right up until the very end.

Obama’s use of a secret court system, known as the Foreign Intelligence Surveillance Court, allowed his administration to ignore a federal court ruling that found bulk surveillance illegal. This ended up granting the National Security Agency the power to collect the phone records of millions of Americans.

With all the outrage over Trump’s so-called “Muslim ban” and other policies, it seems logical that there would have been a similar blow back when Obama created the conditions for the death and destruction which refugees now hope to flee. Yet the same people calling executive overreach under Bush suddenly got quiet when Obama the Democrat came into office. But now that a Republican or Trump is behind the wheel of this enormous vehicle of practically unlimited power, those once quiet voices are rising up again.

Rather than reflecting on these and other horrendous acts perpetrated by the Obama administration, however, much of the Democratic and liberal bases are looking back on the Obama administration as “the good old days.” They and many others are demonstrating, en masse, against the powers that Donald Trump now has access to, ignoring the fact that not only did Obama himself use those powers, in many ways, his administration created and expanded them for the next successor.

The role of the independent press during times of great political upheaval is to wade through the chaos in order to provide the public with hard-hitting truths that transcend party lines.

Because the truth is, it doesn’t’ matter if a Republican or Democrat is in office — the policies from both parties look the same.

But we can’t begin to fight against the looming attacks against our civil liberties and the human rights of people everywhere — not just in the United States — without first acknowledging the crimes of previous administrations –Republican or Democrat — and the powers that they expanded for their successors.

If there’s going to be any genuine resistance to the Trump administration, then we have to be prepared for what tools he now has available, thanks largely to the former Democratic and Republican administrations before him, especially Obama.

With large swathes of America ready to protest, it’s time for the real anti-war movement to seize on that momentum and push for real change that actually creates conditions for a more peaceful world. It’s time to empty out the dictator’s toolbox and dismantle the system that’s brought us to this point. To “Hope” and “Change,” we say: Your move.

This article first appeared on MintPressNews.com and was authored by Mnar Muhawesh