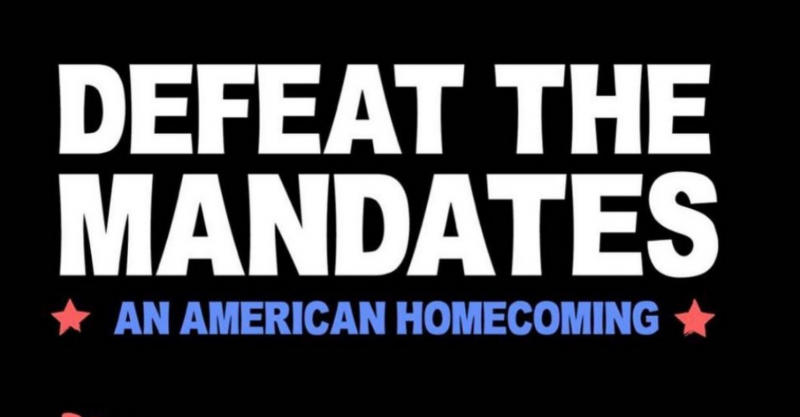 In the name of peace, love, unity, and Liberty, thousands of Americans from across the political spectrum will march in unity against federal government overreach on Sunday, January 23 for an American homecoming at the nation’s capital. Attendees from around the country will join together in favor of individual sovereignty and bodily autonomy.

Remember what it means to be an American.

United We Stand, in Peace We March.

For too long during this crisis, America has been a silent battleground. Friends, family, and neighbors have been turned against one another amid a wave of divide and conquer propaganda actuated by the “New Normal”.

Facts, logic, critical thinking, rational discourse, and basic decency have all taken a backseat to fear, hysteria, anxiety, indoctrination, and vilification. While the powers-that-be reap the rewards of calamity, the American people were cast into the abyss.

The protesters are set to take a stand against the oppressive and authoritarian policies in the new era of what many have aptly dubbed COVID-1984. An era in which the reactionary policies in response to the virus are demonstrably more destructive than the virus itself.

Of particular focus are a number of political policies that have been at the forefront of a statist disease response—which have all but brought about a resurgence of archaic draconian policies once thought to no longer have a place in civilized society.

Massive protests have erupted around the world against medical authoritarianism

With our Constitution, we Americans are uniquely positioned for this fight. It is time for us to #StandUp. The orders are immoral, and we will not comply.
Jan 23, D.C. Join ushttps://t.co/blTFjH3Pw6

• Lockdown mandates; which have unleashed a tsunami of catastrophic consequences.

• Forced masking and vaccine passports; which have led to a state of medical segregation across the nation.

• Mandates targeting children; despite the data and evidence proving these policies to be entirely unscientific and even dangerous.

• Vaccine mandates; in addition to being the most antithetical to science and rationality, stand as an affront to the human right of bodily autonomy.

The protesters don’t stand against these policies frivolously. Over the course of the last two years, a plethora of evidence has mounted proving these policies to be rash, irrational, and entirely ineffective—in addition to completely totalitarian.

On the same day, we join hands across the globe with the World Wide Rally For Freedom as this is their next big day! it is time for the USA to step up and join them! In peace we march. #DoNotComply pic.twitter.com/WBZCQEr5W5

During the interview w/ Joe Rogan, Dr. Robert Malone announces the Defeat The Mandates Rally that will take place on Sunday, Jan. 23 in Washington, DC.

If you are Anti vaccine mandates / passports and are Pro personal liberty, book your trip today!

First announced by Dr. Peter McCullough and then Dr. Robert Malone on Joe Rogan’s podcast, the event will feature numerous keynote speakers espousing their expertise in a multitude of fields. Favoring informed consent, freedom of choice, the need to preserve the exclusivity of doctor-patient relationships, natural immunity, and the need for accountability and transparency with regard to government action.

The event has also partnered with several medical freedom and rights advocacy groups, including the Frontline Covid-19 Critical Care Alliance; Children’s Health Defense; and the Global Covid Summit. With further support from The Unity Project, Teachers for Choice, Educators for Freedom, and the World Council for Health.

“The rise of tyranny can only be stopped if Americans rise up against it while they still have enough freedom left to do so,” said Children’s Health Defense president and general counsel Mary Holland. “We encourage all who can be in Washington on January 23rd to stand in peace and unity with us. Once governments take away the rights of individuals, they are nearly impossible to regain.”

As per the official Defeat The Mandates DC event info, attendees plan to began arriving Saturday the 22nd, with the event set to begin 11:30 a.m. Sunday, January, 23rd when they will march from the Washington Monument to the Lincoln Memorial. Further programs to be held from 12:30 to 2 p.m.

As of January 9, over 24,000 attendees had already registered online.

The rally is also the first to be held at the nation’s capitol in solidarity with the Worldwide Rally For Freedom—a bi-monthly global protest organized to stand in defiance of tyrannical mandates which has grown in support by the millions over the past two years.

Register now to stand with Americans in the name of freedom!

Republished from COVID19Up.org under Creative Commons