Is Hillary Clinton Faking Speeches With A Green Screen? 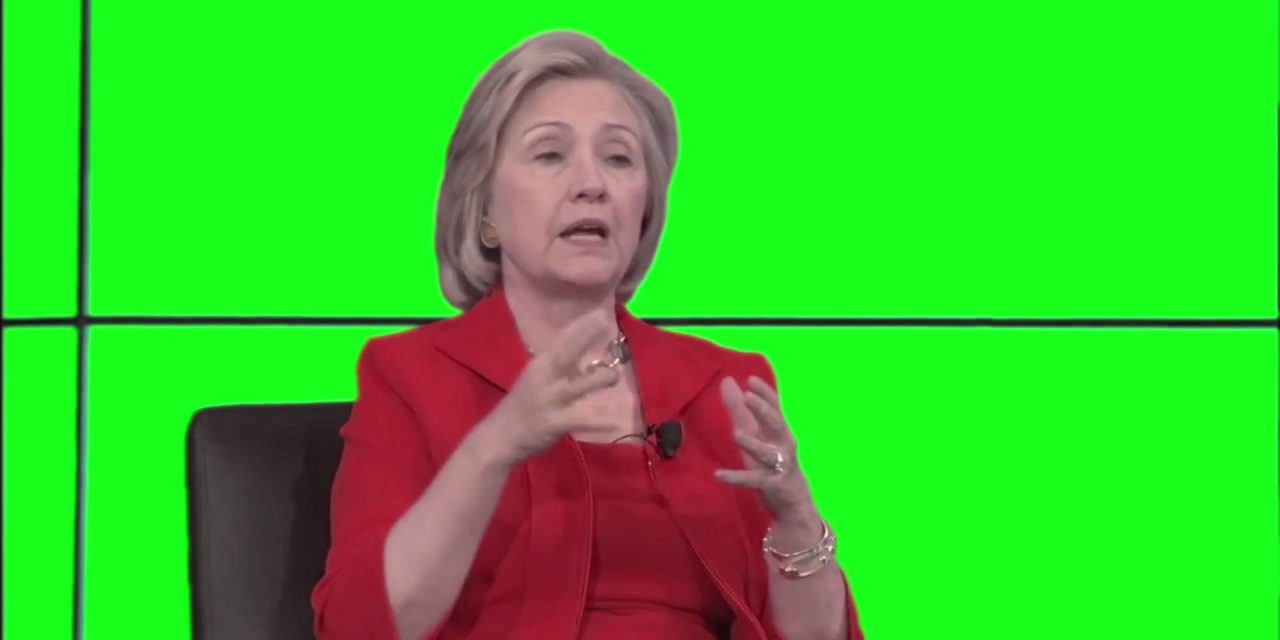 Did Hillary use a green screen during her rally last week in Greensboro, North Carolina?

In August, the accusation of Hillary using a green screen to fake a rally was debunked, after Hillary didn’t appear in smart phone camera screens, an effect explained by video compression. Youtube user New World agenda explains the effect below.

But on September 15, an anomaly occurred where Hillary vanished for a few frames during her speech, apparently showing the usage of CGI – and the logical Occam’s razor explanation for such an effect is that special effects and a green screen or blue screen must have been used. (Or Hillary’s a vampire.)

There is no known technical issue where a person phases in and out throughout a broadcast besides video compression issues. But the question then presents itself – If Hillary Clinton’s campaign is using a green screen what’s the reasoning behind using a green screen? While the possibilities are endless and the Internet has thought up every crazy theory for why – Hillary was arrested, Hillary is dead and our next president will be Hillary’s brain in a jar ran by a super computer, etc. – it does appear that a green screen was used.

I found the original ABC video and it indeed was broadcast with Hillary disappearing in and out of frame. No post-effects were added by Youtubers. Hillary walks in front of a camera phone but isn’t seen in the phones view – while the phone is clearly being held high. In the same video, Clinton is glitching out during the “live” broadcast.

So if this was really a fake broadcast, the next question is with today’s technology would this type of scenario even be possible? The answer is yes, the technology that is available today is insane, there is technology that can alter someones facial expression’s on live TV or a Youtube stream where this could then be re-broadcast.

With such technology as Face2Face, can we even trust what we see anymore being “live”? Like Benjamin Franklin said, “Believe none of what you hear and half of what you see.” Hell, you shouldn’t even believe that’s a quote from him, but whoever said it is right with this technology.

So back to the question of is it possible Hillary used a green screen? Yes it’s very possible, and then the final puzzle piece would be a body double and a previously recorded speech broadcast across the speakers. With the body double moving her mouth to the words and then the closeup’s manipulated using Face2Face, it’s possible but would be incredibly hard to pull off.

However, with this technology you can alter reality, as in the video below you can literally make anyone make a facial expression or appear to say words like making Bush say, “I did 9/11” for example. With technology like this we move into a scary chapter not only having to question the news we receive but questioning the source of people’s words.

I can’t explain what happened in North Carolina, but a lot of green screen “experts” are coming out questioning Hillary’s speech there, including reddit user exanarchist, who claims to work doing video trans-coding professionally. He states several theories as to why they would use a green screen during her “live” broadcast, from least paranoid to most paranoid. If you watch the clips below, you may become a little more paranoid – grab your tinfoil hat! Here’s the honest answer that most people won’t tell you – we will never know for sure. What is provable is the mainstream media uses green screens all the time, just watch the video below. From reddit:

SOLID EVIDENCE THAT HILLARY CLINTON WAS NOT AT GREENSBORO RALLY OR HAD VIDEO OF HERSELF TRANSPOSING HER LIVE APPEARANCE. PLEASE SHARE WIDELY!!!

I work in technology at a company that does tons of video. I have years of experience doing video transcoding professionally.

You can see from the following photo album, screencapped from still frames of ABC15’s video of Hillary Clinton’s Greensboro “rally,” that she DOES NOT appear on the cell phone screens of people filming, but those same screens DO capture flags and backdrop directly behind her. It’s not impossible to superimpose someone’s image on a background, or even in a crowd. It is implausible that anyone would intentionally neglect to superimpose the same image on a cell phone screen in the foreground, damaging consistency.

Hillary Clinton was not physically present at the rally – this was a chroma key overlay transcoded into a live broadcast in layers. Later, Clinton disappears entirely, and is replaced in the broadcast feed as “she” exits the stage.

Least paranoid theory: they are transposing a “good” video stream over one in an uncontrolled environment so they can make sure no one sees her having a coughing fit, or seizure, or freezing. The good stream overlays the real “Sick Hillary” stream. Since Google sucks at live linear streaming, it glitches a lot.

Most paranoid theory: she died of a pulmonary embolism on or after September 11 related to side effects from L-Dopa treatment for late stage Parkinson’s and aspiration pneumonia. A white hearse arrived from Montefiore Medical Center at her Chappaqua home (30 minutes away). Everything since has been staged.