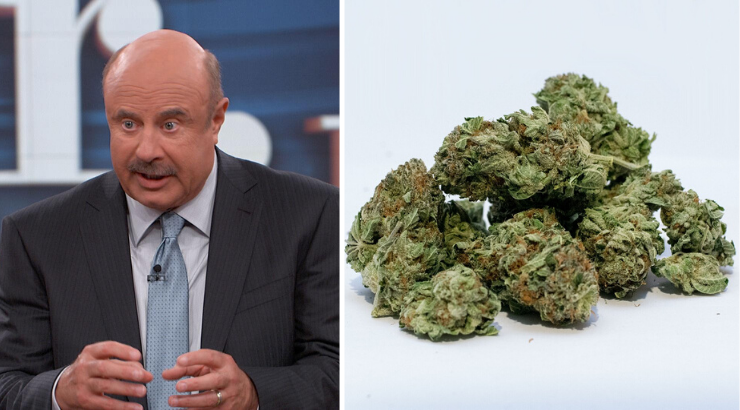 Dr. Phil is many things—an author, a television personality, a regular guest on Oprah, a daytime Emmy nominee, a bald man from the Midwest—but one thing he’s certainly not is a licensed clinical psychologist.

Phil McGraw, best known to millions of Americans as the host of popular tabloid talk show Dr. Phil, is hardly known for actually helping the people who make the often ill-advised choice to step onto his set. And Dr. Phil’s latest bit of sagely advice to young cannabis smokers was decidedly in that same vein, combining half-baked urban legends with outright misinformation about the alleged “hazards” of the devil’s lettuce.

The occasion for Dr. Phil’s intervention against weed came when he had a woman named Bree on his show, who was joined by her 11-year-old son, J.J. The child’s mother claimed that J.J., who is a regular pot smoker, had become violent and misbehaved at home and at school—even going so far as to threaten her with a steak.

At that point, Dr. Phil began to spout off a totally non-scientific and rather ridiculous lecture about the deadly, mind-killing dangers of cannabis. He explained:

“Your brain grows until you’re 25 at least, and it’s constantly changing. When you get to be 18, 19, 20, it’s actually pruning itself back. When you smoke marijuana, it’s like opening your computer up and pouring water inside. A lot of things short out, and it connects where it’s not supposed to, and really creates problems.

Even occasional marijuana smokers will look at a multi-point drop in IQ, even with just occasional use—like once a week, or two or three times a month. You’ll see IQ drop and motivation will drop across time.”

And while no one will disagree that an 11-year-old child should be doing his homework rather than puffing trees, smoking cannabis simply won’t “short your brain.”

While it is true that the brain is still in a state of constant development until the mid-20s, nothing else that Dr. Phil said had any basis in science, said Dr. David Juurlink, a head of clinical pharmacology and toxicology at Sunnybrook Health Sciences Centre.

“It’s ludicrous to equate smoking cannabis with pouring water on a computer.”

But the idea that weed smokers face “a multi-point drop in IQ” from even occasional ingestion of the plant flies in the face of multiple peer-reviewed scientific studies and has “been debunked,” Dr. Verbora said, noting that only one study showed a slight intelligence decline—and even that effect was only temporary.

Even Dr. Phil’s antiquated description of cannabis as “dope” capable of turning a child violent shows what a quack the talk show host is, Dr. Verbora said.

“I’ve treated 5,000 patients and 5,000 out of my 5,000 say cannabis makes them feel relaxed and calm. No intelligent physician or doctor would ever use the word ‘dope’ to describe cannabis.”

“Maybe Dr. Phil should redirect hyperbole to alcohol, tobacco, opioids and benzos, all of which are considerably more harmful, as is exploiting your troubled pre-teen on national television.”