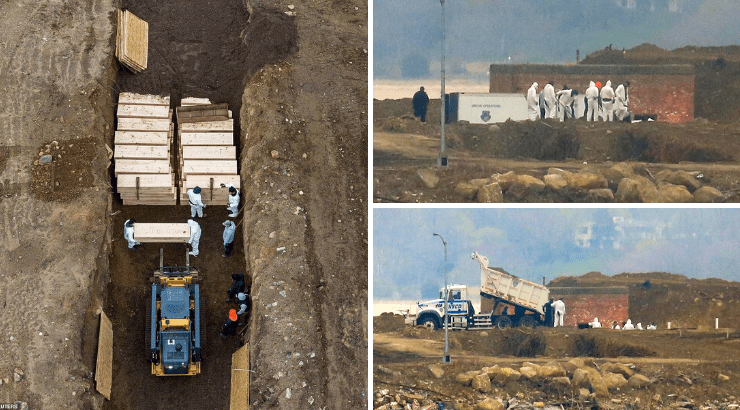 It’s no secret that New York City morgues are running out of room amid the coronavirus pandemic that has completely transformed The City That Never Sleeps. Refrigerated trucks line the streets surrounding some hospitals in the city as nearby residents watch body after body being brought out from the chaotic hospitals and into the cold trucks in an eerie illustration of the sharp contrast between the fight for one’s life and losing the battle.

After death, bodies are typically held in refrigerated storage for up to 30 days as they await being claimed by family. But now, according to its website, the Office of the Chief Medical Examiner (OCME) will hold remains for only 14 days in what is yet another clue as to just how overwhelmed the city truly is.

Unclaimed or unidentified remains are buried on New York City’s Hart Island with the present situation reportedly being of no exception.

Disturbing rumors swirled on Monday after the chairman of the New York City Council health committee, Mark D. Levine, said on Twitter that temporary mass graves in public parks were being considered as an option. Levine’s tweet followed statements made by Mayor Bill de Blasio at a Monday news conference indicating that temporary burials were being considered in the event that city and hospital morgues became completely overwhelmed.

New York City’s mayor emphasized on Monday that rumors of using city parks for burials were “totally false,” adding, “There will never, ever be anything like ‘mass graves’ or ‘mass internment’ in New York City ever.”

However, OCME’s website states: “If a decedent has not been claimed within 14 days, the decedent will be transferred for temporary interment at City Cemetery.” According to Business Insider, hospitals can determine their own time limits for storage of unclaimed bodies, leaving room for even shorter storage times.

City Cemetery is located on Hart Island, an island located in Bronx with an unsettling and long history. While the island may be small, measuring in at about 1 mile long and 0.33 miles wide, the remains of more than one million people are buried there.

Throughout its history, Hart Island has served as the location for United States Colored Troops training grounds, a prison camp, a tuberculosis sanatorium, a homeless shelter, a psychiatric institution, a jail, a drug rehabilitation center, a potter’s field, and more. The first burials recorded on the island occurred during the American Civil War. During World War II, the island’s prison population was moved to Rikers Island where it continues to be housed today.

The cemetery originally occupied one third of the island. Today, the cemetery occupies 131 acres in what is one of the largest mass graves in the United States and the largest tax-funded cemetery in the country.

The potter’s field was run by the New York City Department of Correction until last year when jurisdiction was transferred to the city’s Department of Parks and Recreation.

A March 31 report from the Intercept claimed that Rikers prisoners were being offered $6 an hour and personal protective equipment (PPE) to dig graves on the island. According to the report, a spokesperson for the office of the mayor confirmed the claim but called the arrangement not “Covid-specific.” However, the sharp increase in hourly pay and promise of PPE paints a different picture.

In 2008, the OCME selected Hart Island as a site for mass burials in the event of a flu pandemic. The 2008 Pandemic Influenza Surge Plan For Managing In- and Out-of-Hospital Deaths notes that the OCME will hold bodies “for approximately 14 days before directing a City burial, which is typically conducted at Hart Island.”

The plan also indicates that the OCME “will arrange to have Body Collection Points (BCPs) placed at eligible HCFs, to temporarily increase their storage capacity.” Which is not unlike what we are seeing in New York City right now. The plan notes that “a significant number of decedents will not have a known identity.”

According to the plan, the OCME “will direct temporary interment at the Hart Island Cemetery” when RSFs are at or near capacity and additional cold storage units are unavailable. As of 2007, the island had two sites able to accommodate 19,200 bodies as well as undeveloped sites if needed.

As the pandemic continues to wreak havoc across much of the world, stressing some hospitals to the breaking point, drone footage has surfaced showing bodies being buried in mass graves on Hart Island. While it remains unclear whether these burials are as a result of the novel coronavirus pandemic, it isn’t a stretch to assume a connection despite de Blasio’s previous statement that “there will never, ever be anything like ‘mass graves’,” especially considering the sharp increase in burials from the usual 25 per week to about 24 per day.

This drone footage captures NYC workers burying bodies in a mass grave on Hart Island, just off the coast of the Bronx. For over a century, the island has served as a potter’s field for deceased with no known next of kin or families unable to pay for funerals. pic.twitter.com/wBVIGlX6aK

The chilling footage shows pine boxes being buried in a trench by workers wearing what appear to be hazmat suits. Despite previous reports, the city has hired contract laborers rather than employ Rikers Island inmates to do the work.

Jason Kersten, a spokesman for the Department of Correction, said:

“They added two new trenches in case we need them.

For social distancing and safety reasons, city-sentenced people in custody are not assisting in burials for the duration of the pandemic.”

On Thursday a refrigerated truck containing about 24 bodies was seen arriving to the island on a barge.

Also on Thursday, New York City reported its 4,778th death, an increase of 12% over the previous day.