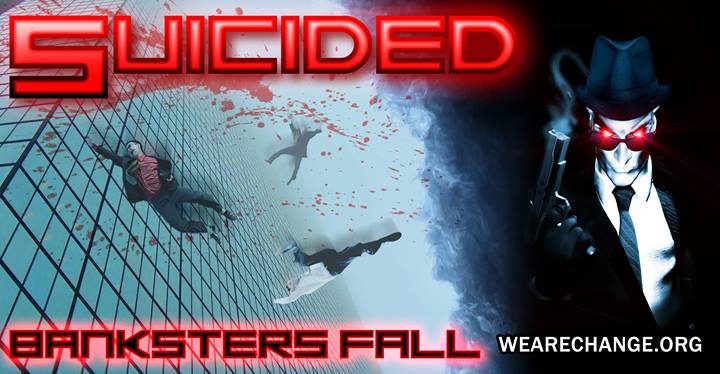 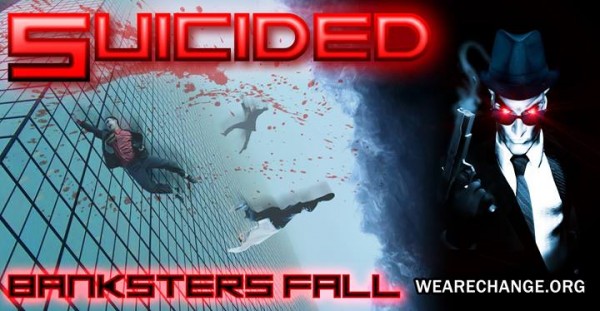 With seemingly no explanation, 8 corporate executives have died within weeks of one another. Ruling out homicide in each case, local police believe the deaths were either suicidal or accidental in nature.

On the morning of January 26, 2014, Tata Motors Managing Director Karl Slym jumped out of his window on the 22nd floor of the Shangri-La hotel in Bangkok, Thailand. His wife claims she was asleep in the room with him at the time. Hotel staff awoke her shortly after her husband’s body was discovered on the 4th floor.

“We found a window open,” stated police lieutenant Somyot Boonyakaew, who is leading the investigation. “The window was very small so it was not possible that he would have slipped. He would have had to climb through the window to fall out because he was a big man. From my initial investigation we believe he jumped.”

In London, recently retired Deutsche Bank Risk Manager William Broeksmit was found hanging inside a residence on the same street where he lived. Although London’s Metropolitan Police stated Broeksmit’s body had not been found within his own home, they have declared his death non-suspicious.

On January 29, 2014, Russell Investments Chief Economist Mike Dueker parked his car at War Memorial Park in Tacoma, Washington, and disappeared. His body was found the next morning at the base of a 50-ft ramp near the Tacoma Narrows Bridge. From 1991-2008, Dueker had been a Research Economist and Assistant Vice-President at the Federal Reserve Bank of St. Louis. Police do not believe his death was accidental or homicidal in nature.

The body of 37-year old JP Morgan Executive Director Ryan Crane was found in his home in Stamford, Connecticut on February 3, 2014. Police are awaiting his toxicology report. According to the Arapahoe County coroner’s office, American Title Services CEO Richard Talley was found with 7 or 8 self-inflicted wounds to his torso and chest from a nail gun. On February 17, 2014, JP Morgan Investment Banker Li Junjie threw himself off the 30th floor of the bank’s headquarters in Hong Kong. Weeks earlier, Swiss Re Communications Director Tim Dickenson was found dead, yet the circumstances of his death have yet to be made public.

Several weeks prior to these apparent suicides, Wall Street Journal reporter David Bird went missing in Morris County, New Jersey. Known for covering OPEC and energy markets, Bird left his house on the afternoon of January 11, 2014. Going for a walk without taking his cellphone or liver medication, he never returned. Although the FBI has joined the search for Bird, he remains missing for over a month.

Are the deaths connected?

Corporate executives endure copious amounts of stress on a regular basis. In the case of Bank of America Exchange Manager Michael Burdin, witnesses claim he folded his arms across his chest a moment before leaping in front of an oncoming express train at Wimbledon station on October 31, 2012. “It’s a very difficult age for a male who has lost their job,” explained Deputy Coroner Dr. Shirley Radcliffe. “Psychiatrists will tell you 50-year-old men who have concerns about work and finances are a particularly vulnerable community, even if they have got no psychiatric illness.”

But never forget the murder of Mahmoud al-Mabhouh. On January 20, 2010, at least 26 disguised covert agents participated in the operation to assassinate al-Mabhouh in his hotel room in Dubai. After injecting him with the muscle relaxant, succinylcholine, his assassins suffocated him with a pillow leaving some of his medication beside him in an effort to make his death appear natural. After reviewing DNA evidence and the hotel’s CCTV footage, Dubai’s police chief Lt. Gen. Dahi Khalfan Tamim claimed, “I am now 100 percent sure that the Mossad is behind the assassination.”

And to confuse you even further, there’s the dubious case of deceased MI6 agent Gareth Williams. His naked body was found inside a red sports bag in his bathtub, padlocked from the outside, with the key inside the bag. None of his DNA was found on the padlock or the rim of the bathtub. The door to his apartment was locked from the outside, and the heat had been turned up to accelerate the decomposition of his corpse.

Colleagues at MI6 didn’t even inquire into his absence from work for a week. Located a few hundred yards from MI6 headquarters in Vauxhall, Williams’ flat had been used by the Secret Intelligence Service as a safe house. Although the coroner Dr. Fiona Wilcox said she was “satisfied that on the balance of probabilities Gareth was killed unlawfully,” London’s Metropolitan Police and Scotland Yard have recently reversed her findings and declared his death an “accident”.

Investigate the evidence to determine for yourself whether these cases are suicides, accidents, or murders. Are you being lied to?