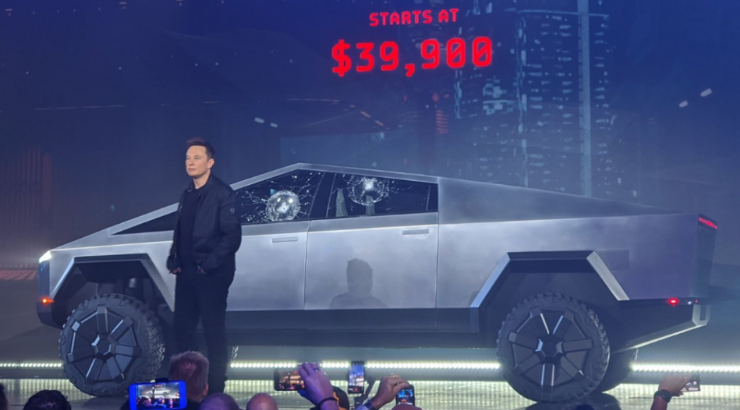 Elon Musk took to the stage on Thursday night to introduce the first Tesla truck model at yet another sycophant-sell-out unveiling “party.” In our wildest dreams, we couldn’t imagine a more ridiculous revealing of Tesla’s new “Cybertruck” than what took place.

As the old saying goes, “a picture is worth a thousand words.”

And here’s that picture: a truck with two shattered windows that looks like it rolled out of a dumpster heap at a metal scrapyard, being offered for the low low price of just $39,900.

We know you have questions. What am I looking at? Why are the windows broken? We’ll get to it.

The theme of the Cybertruck unveiling, after getting over the way the thing looked, was its durability. “We created an exoskeleton,” Musk says at one point, describing the truck’s exterior. It was something Musk literally “hammered home” starting at the beginning of his presentation. In fact, after revealing the truck, he had one of his assistants come on stage and hit the door with a sledge hammer. The door didn’t budge.

Musk then went on to talk about how the truck was bulletproof. The crowd begged him to “shoot it” live on on stage, but Musk settled for showing photos and animations of the truck supposedly being shot at with 9mm bullets.

And it’s a good thing they didn’t try to shoot it on stage, because if it went anything like testing the armored glass, we could have wound up with somebody dead.

Then, in what can only be described as a massively embarrassing failure, Musk then had his assistant come on stage and try to break the truck’s armored glass.

“Normal glass shatters immediately,” Musk said as his assistants, dressed like characters from The Matrix, dropped a metal ball on conventional glass, causing it to shatter.

At which point another of Musk’s assistants gently threw a similar metal ball at the Cybertruck parked on stage. The driver’s side window promptly broke.

“Oh my fucking God,” Musk nervously said, live on the stream, after the front window shattered into a million pieces.

Musk then, assuming it was just a one-off and an aberration, implored his assistant to try again and throw at the back window. You can probably guess what happened next: the second window also broke.

So Musk nervously joked his way through the rest of the skit, claiming maybe his assistant had thrown at the truck “too hard”. In other words, Musk’s presentation of the indestructable Cybertruck had been bested by a skinny Silicon Valley beta male lofting a small object at it.

Musk then moved on and talked about the suspension on the truck – with the smashed glass still present in the windows – where it remained for the rest of the demonstration.

Meanwhile, in almost real-time, one alert viewer pointed out that the truck’s back left wheel also appeared to be in the process of falling off. The FUD saboteurs must be at it again!

Musk then showed video (pre-recorded, of course) of the Cybertruck supposedly beating a Ford pickup in a “tug of war”. Musk claimed that the Cybertruck could go 0 to 60 in 2.9 seconds and do a quarter mile in 10.8 seconds. He showed the truck drag racing a Porsche, to make his point.

Not only do you win your drag races, you win in style!

Musk then said the truck would come in three ranges: 250 miles, 300 miles and 500 miles. He priced the truck in three models, at $39,000, $49,900 and $69,000. He then claimed the “actual cost of ownership” was much lower because you didn’t have to pay for gasoline – similar to the claims the company was making on its website that drew the ire of German regulators, who eventually forced Tesla to change how they were presenting the sales price of their vehicles.

And of course there was a “one more thing moment” when Musk announced that the company had also made an ATV. But the live video stream cut out before we could hear more details about it.

To no one’s surprise, after the video ended, viewers were immediately hit with an “Order Now” page.

The responses from social media were mixed, to say the least:

How they made the #Cybertruck pic.twitter.com/2rZ2r0BSaF

Is this a troll? pic.twitter.com/khsQsDIFoA

First if someone – anyone loves Elon Musk – Maye, Kimbal- Grimes – snag him now get him to rehab. It’s embarrassing $TSLAQ pic.twitter.com/8FISlLyVSz

You know what happens when you're surrounded by yes men?

you get a cyber truck.$TSLAQ

If owning a big truck means you have a small ****, what does owning a #cybertruck mean?$tslaq

Ok, did I just see @elonmusk bring out a triangle on wheels called a #Cybertruck filled with Mad Max cosplay dudes, beat it with sledgehammers, break it's windows, drag around an F150, race a Porsche and then stick an ATV up it's ass and then say 'good night!'? pic.twitter.com/8DJrhdT9Ey

Bruh what the FUCK is elon smoking.
The truck looks like shit and he literally shattered both windows on stage. Absolute joke of a CEO.$TSLA $TSLAQ pic.twitter.com/CDqreMu8Lj

I'm not sure I would have the right words to express my gratitude and admiration to real-life @ElonMusk, should I ever have the opportunity to meet him in person; however, if I were somehow able to hold it together, in his presence, I would want to say this- #ConversationWithElon pic.twitter.com/75TbBG73w7

Even Denny’s took a shot:

Revealed our Dynertruck the same day as the Cybertruck… smh pic.twitter.com/Wmucb5evHk

You can watch the full replay here: