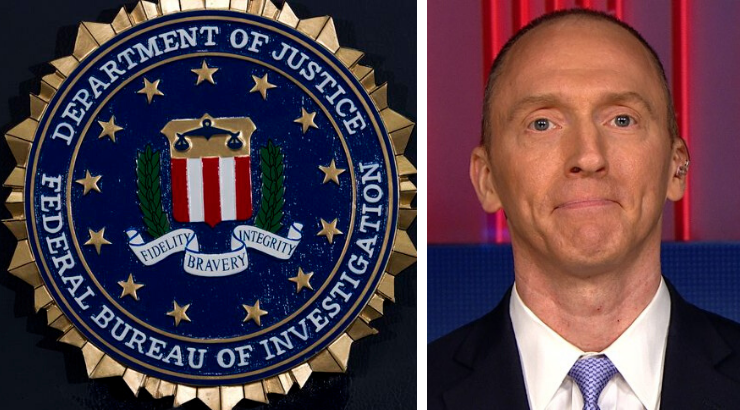 Update: CNN has updated their story to include that the individual under investigation is a former FBI line attorney.

The FBI line attorney did not believe it was a close call.

The FBI line attorney believed there was probable cause to support the Page FISA app.

May also have worked on the Hillary Mid Year Exam investigation. pic.twitter.com/GQye617Np7

Over the next few weeks, those who didn’t go to law school will start learning about the “fruit of the poisoned tree” doctrine. https://t.co/JEE6TUrZmS

An FBI official is under criminal investigation for fabricating evidence related to the agency’s surveillance of Trump campaign aide Carter Page, according to CNN.

According to the report, Justice Department Inspector General Michael Horowitz’s review of the FBI’s warrant applications under the Foreign Intelligence Surveillance Act (FISA) revealed an altered document which – we assume – was used to bolster the application to obtain the warrant and/or subsequent renewals.

Evidence of the fabricated document was turned over to John Durham, the federal prosecutor tasked earlier this year by Attorney General William Barr with launching a broad investigation into the FBI’s activities surrounding the 2016 US election.

As CNN notes, however, “it’s unknown how significant a role the altered document played in the FBI’s investigation of Page and whether the FISA warrant would have been approved without the document.” What we do know, however, is that it was significant enough to warrant a criminal investigation.

Some witnesses who have been interviewed in Horowitz’s investigation have said they expect the inspector general to find mistakes in the FBI’s handling of the FISA process, but that those mistakes do not undermine the premise for the FBI’s investigation.

Horowitz’s investigators conducted more than 100 witness interviews in their review. During one of interviews this year, they confronted the witness about the document. The witness admitted to the change, the sources said.

The identity or rank of the FBI employee under investigation isn’t yet known, and it’s not clear whether the employee still works in the federal government. No charges that could reflect the situation have been filed publicly in court. –CNN

On Thursday, Senator Lindsey Graham (R-SC) announced that Horowitz would release his report on December 9, and would testify before the Senate Judiciary Committee two days later.