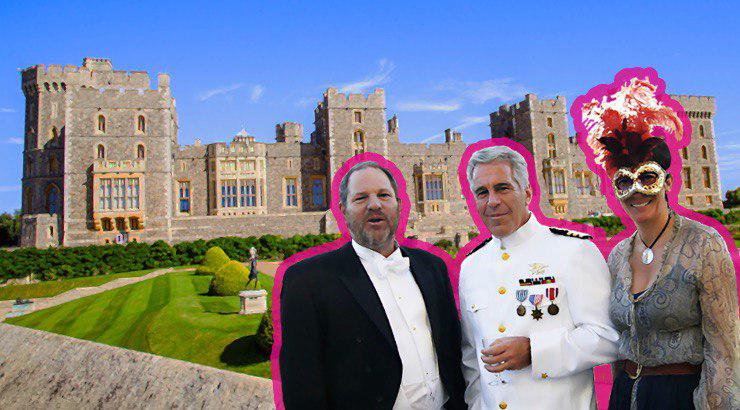 The Sun recently published photos taken in 2006 of notorious sexual predators Jeffrey Epstein and Harvey Weinstein at Princess Beatrice’s Windsor Castle party. Ghislaine Maxwell, Epstein’s accomplice who is currently on the run, was also appears in a photo with the pair.

The group were reportedly guests of Prince Andrew at the exclusive event that boasted only about 400 total guests in attendance.

You couldn’t make this up. Jeffrey Epstein and Harvey Weinstein were photographed together at Princess Beatrice’s 18th birthday. Standing with them is Ghislaine Maxwell. pic.twitter.com/ulYZjpEUnM

A source told the Sun:

“This photograph sums up just why the Epstein affair has been so disastrous for Andrew. He brought these people into the royal fold, to Windsor Castle no less, where they could rub shoulders with the great and good. It is an astounding lack of judgment at the very least. This picture will raise further questions about Andrew’s interaction with these individuals.”

This was well before Weinstein was exposed to the public as the predator that he is known as today, but for most of his career, rumors of his abuse swirled within the industry. The same goes for Epstein, who was even under federal investigation for crimes against children at the time of the event. In fact, he was in court just a week later facing charges for crimes against children.

In his disastrous interview for BBC’s Newsnight last month, Prince Andrew was asked about Epstein’s appearance at the party, and he claimed to be unaware of the charges against his friend.

However, one of the attorneys representing Epstein’s victims, Jack Scarola, said that Epstein was well aware of the investigation at the time of the party.

“There was a fairly extensive investigation underway by then. It is absolutely certain that at the time of the Windsor Castle gathering, Jeffrey Epstein was aware an investigation was going on—a search warrant had been executed on his home. I will leave it to others to judge whether it goes to the heart of concerns about the conduct of Prince Andrew,” Scarola said.

Unfortunately, the 2006 trial related to the initial charges against Epstein resulted in a shady backroom deal in which he served just 13 months in prison with regular work-release privileges.

The connection between Epstein and Weinstein has been documented for several years, but the significance was not fully understood until their crimes were exposed in recent years. The pair’s relationship goes back as far as 2003 when they were both involved in a failed deal to purchase New York Magazine for $45 million.