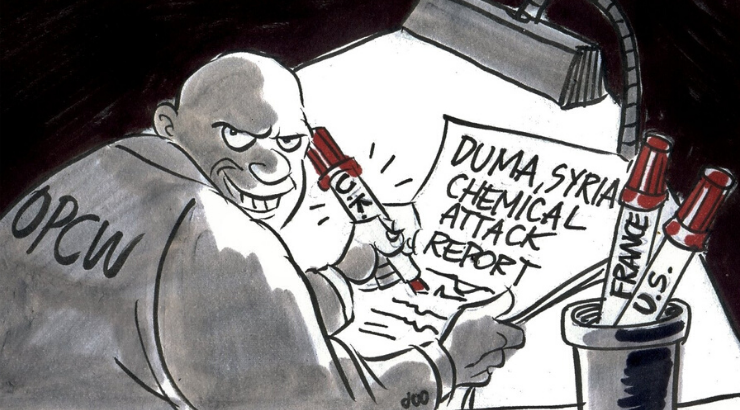 Late Saturday WikiLeaks released more documents which contradict the US narrative on Assad’s use of chemical weapons, specifically related to the April 7, 2018 Douma incident, which resulted in a major US and allied tomahawk missile and air strike campaign on dozens of targets in Damascus.

The leaked documents, including internal emails of the Organization for the Prohibition of Chemical Weapons (OPCW) — which investigated the Douma site — reveal mass dissent within the UN-authorized chemical weapons watchdog organization’s ranks over conclusions previously reached by the international body which pointed to Syrian government culpability. It’s part of a growing avalanche of dissent memos and documents casting the West’s push for war in Syria in doubt (which had resulted in two major US and allied attacks on Syria).

This newly released batch, WikiLeaks reports, includes a memo stating 20 inspectors feel that the officially released version of the OPCW’s report on Douma “did not reflect the views of the team members that deployed to [Syria]”. This comes amid widespread allegations US officials brought immense pressure to bear on the organization.

RELEASE: Third batch of documents showing doctoring of facts in released version of OPCW chemical weapons report on Syria. Including a memo stating 20 inspectors feel released version “did not reflect the views of the team members that deployed to [Syria]”https://t.co/ndK4sRikNk

The Daily Mail’s Peter Hitchens, who saw the leaked documents just prior to WikiLeaks going public with them had this to say:

Sources stress that the scientists involved are ‘non-political, utterly uninterested in any strategic implications of what they reveal’.

They just ‘feel that the OPCW has a duty to be true to its own science, and not to be influenced by political considerations as they fear it has been’.

An internal memo seen by The Mail on Sunday suggests that as many 20 OPCW staff have expressed private doubts about the suppression of information or the manipulation of evidence.

This suppression of information included key evidence which undermined claims Syrian military helicopters dropped a gas cylinder from the air, which had long been the linchpin in Washington’s accusation that “Assad gassed his own people” at Douma.

Like waking up from a long nightmare that almost led to WWIII:
"The Mail on Sunday can reveal that a senior official at the @OPCW demanded the ‘removal of all traces’ of a document which undermined claims that gas cylinders had been dropped from the air.."https://t.co/MvMwX1xrEr

The leaks also suggest the OPCW possessed scientifically credible evidence showing the victims of the alleged attack had symptoms not consistent with chemical gas exposure (prior OPCW statements pointed to chlorine use), casting further doubt on that aspect of the investigation.

But perhaps the most important leak in the new trove of emails centers on a raging debate among scientists over whether to include in their report the phrase “chlorine containing compounds were detected” and how to qualify it — given it was found only in such trace amounts as to be consistent with common household levels of chlorine-related items.

That final report claimed there were ‘reasonable grounds’ that chlorine gas was used in Douma, but an OPCW whistleblower says only tiny quantities of chlorine were detected in forms possible to find in any household. — Daily Mail

OPCW inspector tries to argue to FFM team leader Sami Barrek that the low levels of chlorinated organic chemicals need to be reported to avoid misrepresentation and confusion. Barrek says he'll unilaterally overrule the inspectors and omit the information.https://t.co/nPZtMbakAF pic.twitter.com/norATrlc7l

This crucial document (among others), which expresses concern that the media would wrongly assume a “chlorine attack” based on common household trace levels is found in the following memo: 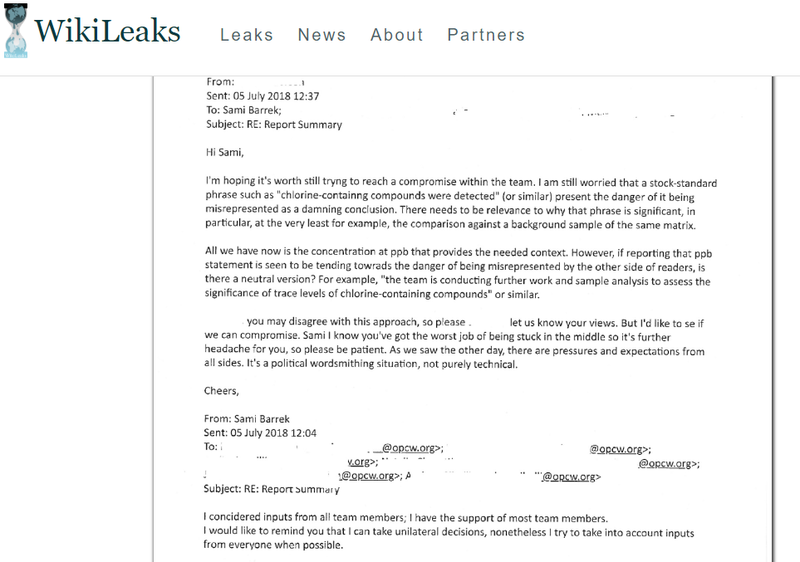 And here’s another example: 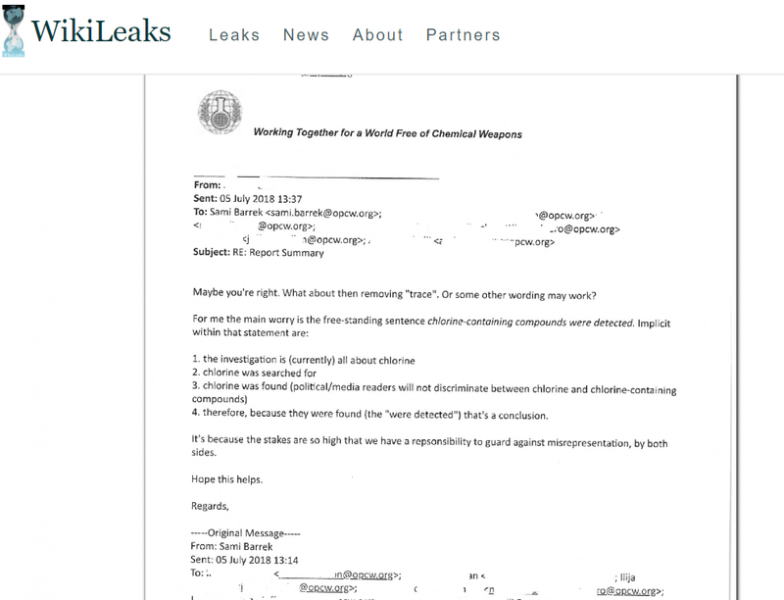 Another stunning OPCW admission heretofore unreleased to the public:

Hitchens continues commenting on the trove of leaked documents as follows:

Alleged casualties shown in videos of the attack were foaming at the mouth in a way that might be expected of victims of sarin, but not by victims of chlorine. Yet all the reports agree that no traces of sarin were found at Douma.

These doubts were confirmed by expert toxicologists consulted by the OPCW investigation team on a visit to Germany in June 2018.

They concluded ‘there was no correlation between symptoms and chlorine exposure’.

In a key passage it adds ‘the team considered two possible explanations for the incongruity.

‘A) The victims were exposed to another highly toxic chemical agent that gave rise to the symptoms observed and has so far gone undetected.

‘B) The fatalities resulted from a non-chemical-related incident.’ In other words, either the victims died from an unknown, undetected gas for which no evidence exists or there never was a chemical attack.

These severe doubts which were expressed internally among scientists, analysts, and technicians were never made public by the OPCW, hence the new leaks, apparently facilitated by frustrated staff who want to make the case to the world about the significant doubts.

Today WikiLeaks releases more documents showing internal disagreement within the OPCW about how facts were misrepresented in a redacted version of a report on an alleged chemical attack in Douma, Syria in April 2018.

Amongst these is a memorandum written in protest by one of the scientists sent on a fact finding mission (FFM) to investigate the attack. It is dated 14 March 2019 and is addressed to Fernando Arias, Director General of the organisation. This was exactly two weeks after the organisation published its final report on the Douma investigation.

WikiLeaks is also releasing the original preliminary report for the first time along with the redacted version (that was released by the OPCW) for comparison. Additionally, we are publishing a detailed comparison of the original interim report with the redacted interim report and the final report along with relevant comments from a member of the original fact finding mission. These documents should help clarify the series of changes that the report went through, which skewed the facts and introduced bias according to statements made by the members of the FFM.

The aforementioned memo states that around 20 inspectors have expressed concerns over the final FFM report, which they feel “did not reflect the views of the team members that deployed to Douma”. Only one member of the fact finding team that went to Douma, a paramedic, is said to have contributed to the final version of the report. Apart from that one person, an entirely new team was gathered to assemble the final report, referred to as the “FFM core team”…