Eric Holder didn’t send a single banker to jail for the mortgage crisis. Is that justice? 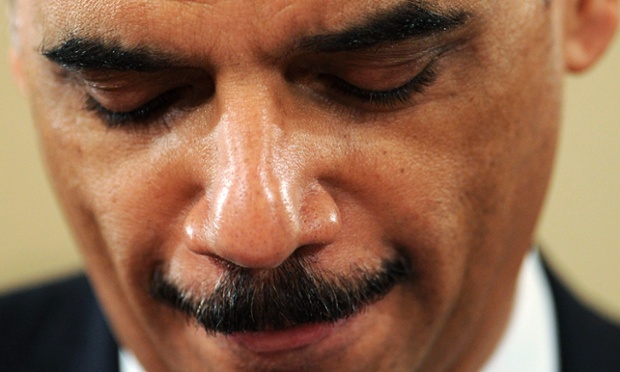 Holder has a mixed legacy: excellent on civil and voting rights, bad on press freedom and transparency. Photograph: JONATHAN ERNST/Reuters

The telling sentence in NPR’s report that US attorney general Eric Holder plans to step down once a successor is confirmed came near the end of the story.

“Friends and former colleagues say Holder has made no decisions about his next professional perch,” NPR writes, “but they say it would be no surprise if he returned to the law firm Covington & Burling, where he spent years representing corporate clients.”

In March, Covington highlighted in marketing materials their award from the trade publication American Lawyer as “Litigation Department of the Year,” touting the law firm’s work in getting clients accused of financial fraud off with slap-on-the-wrist fines.

Covington, American Lawyer says, helps clients “get the best deal they can.”

Holder has a mixed legacy: excellent on civil and voting rights, bad on press freedom and transparency.

But if you want to understand what he did for the perpetrators of a cascade of financial fraud that blew up the nation’s economy in 2008, you only have to read that line from his former employer: he helped them “get the best deal they can.”

As for homeowners, they received a raw deal, in the form of little or no compensation for some of the greatest consumer abuses in American history.

As far back as 2004, the FBI warned of an “epidemic” of mortgage fraud, which they said would have “as much impact as the Savings & Loan crisis.”

They were wrong; it was worse. Moynihan
Brian T Moynihan, chief executive officer of Bank of America Corp, one of the banks accused of extensive mortgage abuses. Very little of the money from its settlements has gone to help homeowners. Photograph: Bloomberg via Getty Images
And banks and lenders carried through that fraud to every level of the mortgage process. They committed origination fraud through faulty appraisals and undisclosed trickery.

They committed servicing fraud through illegal fees and unnecessary foreclosures.

They committed securities fraud by failing to inform investors of the poor underwriting on loans they packaged into securities.

They committed mass document fraud when they failed to follow the steps to create mortgage-backed securities, covering up with fabrications and forgeries to prove the standing to foreclose.

By the time the bubble collapsed, the recession hit and Holder took over the Justice Department, Wall Street was a target-rich environment for any federal prosecutor. Physical evidence to an untold number of crimes was available in court filings and county recording offices.

Financial audits revealed large lapses in underwriting standards as early as 2005. Provisions in the Sarbanes-Oxley Act, passed during the last set of financial scandals in 2002, could hold chief executives criminally responsible for misrepresenting their risk management controls to regulators.

Any prosecutor worth his salt could have gone up the chain of command and implicated top banking executives.

In 2009, Congress passed the Fraud Enforcement and Recovery Act, giving $165m to the Justice Department to staff the investigations necessary to bring those accountable for the financial crisis to justice.

Yet, despite the Justice Department’s claims to the contrary, not one major executive has been sent to jail for their role in the crisis.

Most of the “investigations” of financial institutions over the past six years have swiftly moved to cash settlements, often without holding anyone responsible for admitting wrongdoing or providing a detailed description of what they did wrong.

The headline prices of these settlements usually bore no resemblance to the reality of what they cost the banks.

The National Mortgage Settlement, for example, was touted by Holder’s Justice Department as a $25bn deal. In reality, banks were able to pay one-quarter of that penalty with other people’s money, lowering principal balances on loans they didn’t even own.

Other penalties featured similarly inflated numbers that didn’t reflect the true cost. Banks could satisfy their obligations under the settlements through routine business practices (including some, like making loans to low-income homeowners, that make them money).

A recent series of securities fraud settlements with JP Morgan, Bank of America and Citigroup, which DoJ said cost the banks $36.65bn, actually cost them about $11.5bn. And shareholders, not executives, truly bear that cost.

Incidentally, the Wall Street Journal found last week that the Justice Department only collects around 25% of the fines they impose. So the banks may have gotten off even easier. Holder
The Justice Department has reportedly collected only 25% of the fines it has imposed on banks. Photograph: Petros Giannakouris/AP
These settlements have actually perverted the notion of justice, turning accountability into a public relations vehicle. And Holder’s Justice Department has been guilty of cooking the books: they admitted last August to overstating the number of criminal financial fraud charges by over 80%.

The DoJ’s Inspector General criticized this in a March report, and also found that DoJ de-prioritized mortgage fraud, making it the “lowest-ranked criminal threat” from 2009-2011.

As for homeowners, the biggest victims of Wall Street misconduct, they received little relief. Victims who already lost their homes got checks in the National Mortgage Settlement for between $1,500-$2,000, compensating people wrongly foreclosed upon with barely enough money for two month’s rent.

Despite claims that 1m borrowers still in their homes would get principal reductions under the settlement, when the final numbers came in this March, just 83,000 families received such a benefit, an under-delivery of over 90%.

Considering that over five million families experienced foreclosures since the end of the crisis, that relief is a drop in the bucket.

For those still eligible for relief, thanks to the expiration of a law called the Mortgage Forgiveness Debt Relief Act, any principal forgiveness will count as earned income for tax purposes, meaning that homeowners struggling to avoid foreclosure will subsequently get hit with a tax bill they cannot afford.

The Justice Department only recognized this belatedly, creating a fund in a recent Bank of America settlement to “partially” defray tax costs.

For others without that benefit, the help the Justice Department provided will look more like harm.

Homeowners today continue to lose their homes based on false documents. Because the Justice Department just put a band-aid over the fraud, and didn’t convict any of the ringleaders, the problems went unaddressed, and the root causes never got fixed.

In fact, the entire banking sector’s get-out-of-jail free card gives them confidence that they could commit the same crimes again, with little if any legal implications.
The decision to protect banks instead of homeowners should be laid at the feet of the president and his administration, not one man in the Justice Department. But Holder certainly carried out the policy, even if he didn’t devise it.

We’ll soon find out if Holder merely presided over DoJ in a pause between helping corporate clients at Covington & Burling. But the failure to prosecute during his time in office certainly makes it look like Holder’s sympathies were with those clients even while serving as attorney general.