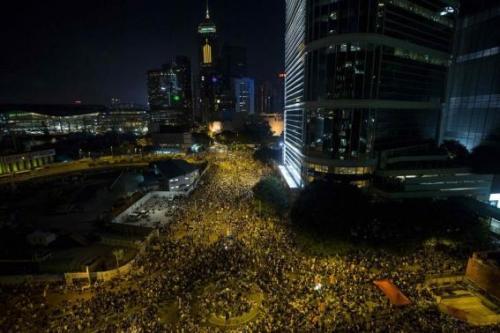 Update: the Occupy Central campaign has officially begun, which likely means even more violent reprisals by the local police: http://www.zerohedge.com

No, this is not Ferguson: it is, according to many, the world’s most capitalist city, Hong Kong, where over the past few hours, around 50,000 students are said to have massed on late Saturday, demanding more democracy, as tensions grew over Beijing’s decision to rule out free elections in the former British colony.

According to Reuters, the crowds swelled less than 24 hours after riot police used pepper spray to disperse protesters around government headquarters, arresting more than 60 people opposed to the Chinese government’s tightening grip on the city. The unrest underscores the obstacles China faces in Hong Kong as a restive younger generation challenges its influence over the densely-populated financial hub.

Tempers flared and there were scenes of chaos before dawn on Saturday when protesters used umbrellas to shield themselves from the pepper spray. Those who got hit used water to rinse their eyes. “I paid my highest respect to every soldier who defends till the last moment… Civil disobedience – it continues to happen,” said student leader Lester Shum on his Facebook page.

Hong Kong’s Education Bureau appealed to parents and teachers on Saturday not to allow underage children and students to take part in unlawful activities to avoid risking their safety.

Leaders of the local Occupy movement arrived to show their support for the protests. They plan to blockade the financial district on Oct. 1, a holiday, hoping it will escalate into one of most disruptive protests in Hong Kong for decades.

The latest clashes were the most heated in a series of anti-Beijing protests. Police arrested six people overnight, including teenage student leader Joshua Wong, who was dragged away by police, kicking, screaming and bleeding from his arm, after he called on the protesters to charge the government premises.

“Hong Kong’s future belongs to you, you and you,” Wong, a thin 17-year-old with dark-rimmed glasses and bowl-cut hair, told cheering supporters before he was taken away.

One thing is certain: the youth protest movement can hardly be any more ineffectual than America’s own OccupyWallStreet farce.

One protester said she had joined the protests to secure a better future for her five-year-old son, who was by her side wearing swimming goggles to protect him if the police fired more pepper spray.

“If we don’t stand up, we will be worried about his future,” said the 33-year-old woman named Li. “He can’t choose his own future.”

The demonstrators broke through a cordon late on Friday and scaled perimeter fences to invade the city’s main government compound in the culmination of a week-long rally to demand free elections. The Hospital Authority said 34 people had been treated in hospital by Saturday evening as a result of the clashes.

The protesters were removed one by one on Saturday afternoon, some of them carried away.

“The police have used disproportionate force to stop the legitimate actions of the students and that should be condemned,” said Benny Tai, one of the three main organizers of the pro-democracy Occupy Central movement.

Hong Kong returned from British to Chinese rule in 1997 under a formula known as “one country, two systems”, with a high degree of autonomy and freedoms not enjoyed in mainland China. Universal suffrage was set as an eventual goal. But Beijing last month rejected demands for people to freely choose the city’s next leader in 2017, prompting threats from activists to shut down the Central financial district in a so-called Occupy Central campaign. China wants to limit elections to a handful of candidates loyal to Beijing.

Which, maybe just maybe, could explain our post from May showing “Stunning Images Of Chinese Riot Police Training For A “Working Class Insurrection.” Here is a sampling, viaIfeng.com, captions google translated:

“Demonstrators” armed with sticks toward the SWAT

“Demonstrators” conflict with the SWAT occur.

More “thugs” armed with machetes out of the bus.