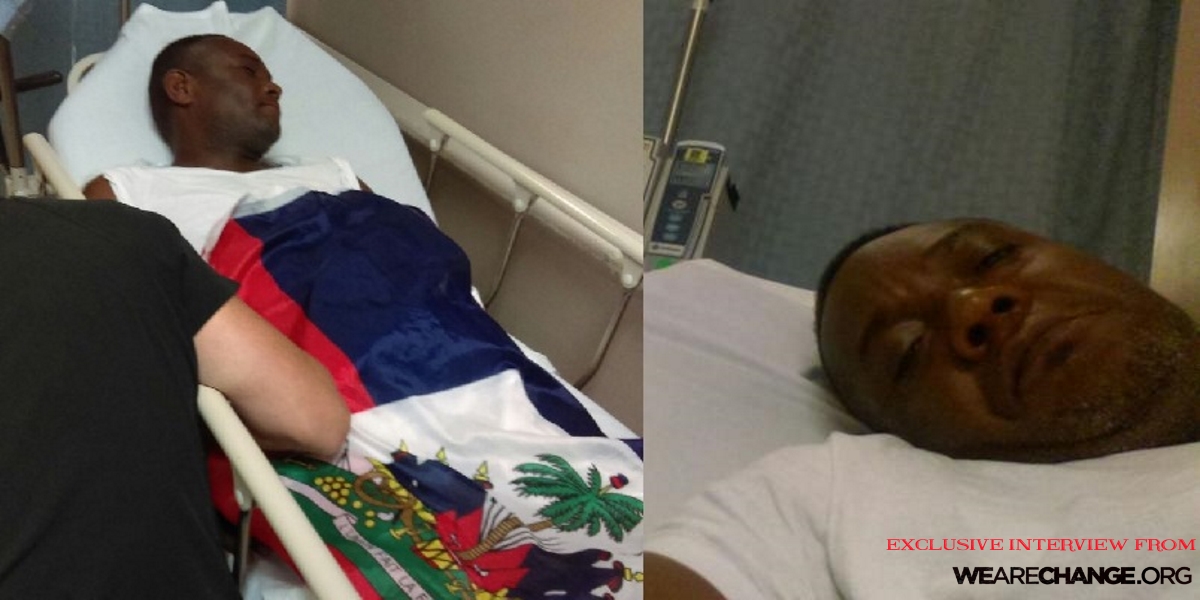 I sat down to talk to Haitian activist Theova Milfort, who recently passed out in front of the White House during his six day hunger strike.

Milfort was protesting for Barack Obama to visit his country Haiti and to apologize publicly for what the Clintons did to Haiti before he leaves office.

Theova was rushed to the hospital after passing out in front of the White House during a campaign for Barack Obama to visit Haiti before he leaves office.

Theova expressed that he wanted the betterment of his people, especially the youth. Theova runs an organization that helps the youth and other struggling Haitian residents to help get his people out of poverty. He spoke about how the Clintons raped his country of it’s resources and destroyed his country’s economy after the Haitian earthquake. Speaking about the Clintons mining deal, he called it an economic crime against Haiti.

“After 50 years to get a permit for Tony Rodham, to export gold in Haiti less than 2% of royalties, this is insane this is actually an economic crime against Haiti,” Theova said.

Theova additionally talked about the history of slavery in Haiti and Haiti’s history that influenced the U.S. and other countries, and how the Haitians were the first independent black nation in the world. This is a major reason he feels that Barack Obama should go over to Haiti before he leaves office, being the first U.S. African American president.

“We the people of Haiti have a slogan shut down Haiti to rebuild it,” Theova said.

“We beat up the first army the french and Napoléon army and we declared that Haiti was free and the first black nation in the world. Back in the 1820’s African American’s were in Haiti fleeing from racism and misery and slavery in America. Then back to 1920-30s-40s-50s-60s there was still slavery going on in the USA, then in 1979 some fifty hundred soldiers went to Sabadah to fight against the British for independence.

Then back to 1960’s we saw that blacks weren’t allowed to share the same bathrooms. Slavery didn’t end until Rosa Parks stood up and said I won’t give up my seat for you. A big time blow, that got inspired from the Haitian revolution because we are the first to say “Black Lives Matter” and were the first ones to say All lives matter. We helped South America get independence Brazil, Argentina, Panama etc.,” Theova said.

Theova also talked about how Haitians are seen as unskilled workers and paid less despite working for years for a manufacturing corporation.

“The main problem is the wages aren’t good and the government is taking wages out of those wages and they give only 1,000 – 3,000 people jobs.”

We also discussed the corruption of the current Haitian government, opening the market for foreign businessmen while selling out their own people.

Theova told me how it’s been an uphill battle, constantly facing hardships in trying to get his message across to help his county.

Thoeova helps run the non-profit organization FTMDhaiti.org, which provides micro-loans to help Haitians. Theova added “handouts don’t work in Haiti, we say that the best way to help people is teach them how to catch a fish not give them a fish daily, we do financial training, how to run a small business,  how to run it, how to deal with customer service, how to maintain stocks and we give them a small amount of money to open up or add to their existing businesses.”

If you can afford it and want to help out the people of Haiti, you can donate and reach Theova through FTMDhaiti.org. Stay tuned to We Are Change.

In this video former Haitian President of Senate is speaking out to tell the truth about the Clinton Foundation at a Trump event! The former president said that Hillary Clinton was trying to buy him. Clinton’s brother was later granted a rare permit by the Haitian government to mine for gold.

In this video Luke Rudkowski interviews Haitian American Joseph Mathieu a member of the Haitian community that has been in the streets protesting against Hillary Rodham Clinton.