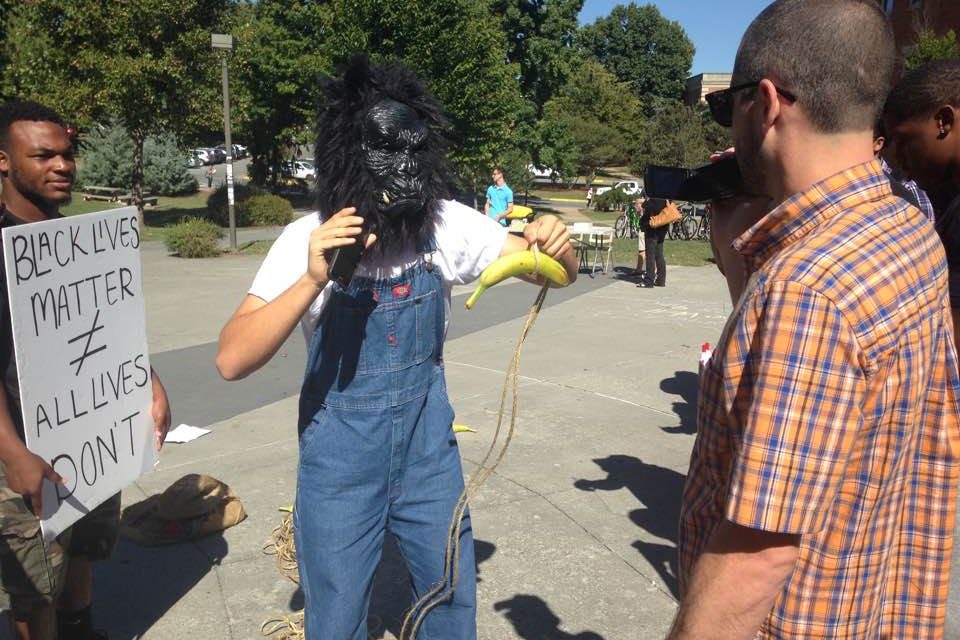 A counter protester at a Black Lives Matter demonstration at East Tennessee State University has been charged after he showed up in a gorilla mask and handed out bananas. 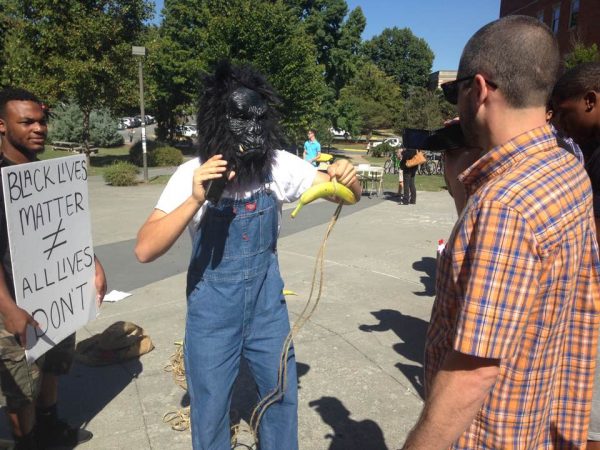 The protest was being held on campus on Wednesday afternoon, when it was crashed by Tristan Rettke –a freshman at the university. The ETSU Department of Public Safety report said that he was wearing blue jean overalls, a white t-shirt, the mask, and was handing out bananas on a rope. He was also carrying a burlap sack with a rebel flag and marijuana leaf on it.

A protestor in a gorilla mask confronted Black Lives Matter demonstrators with bananas on Wednesday in Borchuck Plaza @etsu pic.twitter.com/stm2E4ijRD

After Rettke’s arrival, the police were called over his “disorderly conduct.” He was detained and taken to the Public Safety Office.

“I saw him come down the steps as a gorilla,” Jaylen Grimes, one of the protesters, told the East Tennessean. “He pulled out his burlap sack and then he had the rope and whatnot and then he started offering us bananas. A lot of us didn’t take it, but I just took as a sign of peace offering and just to show him that, just because he’s being disrespectful towards me, I won’t be disrespectful towards him.”

“He was just trying to get a reaction out of us,” Grimes said. “If we would have lashed out violently, that would have been another problem and we would’ve all got in trouble … and like I said, that’s not why we’re here. We were here as peaceful (demonstrators), so we had to remain as such.”

Despite being offensive and totally out of line, Grimes told the paper that Rettke’s presence drew a bigger crowd, which they were thankful for.

“I was going to let him stay as long as he wanted to,” Grimes said, “because once white people see how the counterpart of their same culture acts, they can just reflect on that and see, ‘Oh, I’m not like that. Oh, I actually might want to help.’ And they might want to push against what his thoughts and what his beliefs are.”

“Violence is not our answer to anything,” Grimes said. “Because once you fight fire with fire, it just starts a larger fire. And where there’s more fire, there’s more destruction.

ETSU President Dr. Brian Noland gave a press conference regarding his arrest shortly after the incident, calling Rettke’s actions “incomprehensible and intolerable” and asserted that he does not represent the values of the university.

Rettke was apparently so offensive that ETSU officials posted to Facebook inviting students to talk about it at an event in the auditorium the same evening.

“The ETSU Department of Public Safety staff responded to the incident. At this time, criminal charges are pending before the local district attorney, and an internal student-conduct investigation has begun,” the post read. “Our university values diversity, inclusivity and respect for others. In keeping with those values, there will be an opportunity for community dialogue tonight at 7 p.m. inside the D.P. Culp Auditorium. University leadership will be present.”

The masked gorilla-man was certainly offensive — and his attire and actions were disgusting — but were they illegal?

They were according to the campus administration and the District Attorney General’s office, who have charged him with civil rights intimidation. He has now been taken to the Washington County Detention Center.

In Tennessee, civil rights intimidation requires that “the defendant injured or threatened to injure or coerced another.”

Meanwhile, another student was present holding a sign that said “black lives matter, all lives don’t.”

While nobody could reasonably argue that Rettke’s actions were not offensive, at what point does being an asshole become criminal?