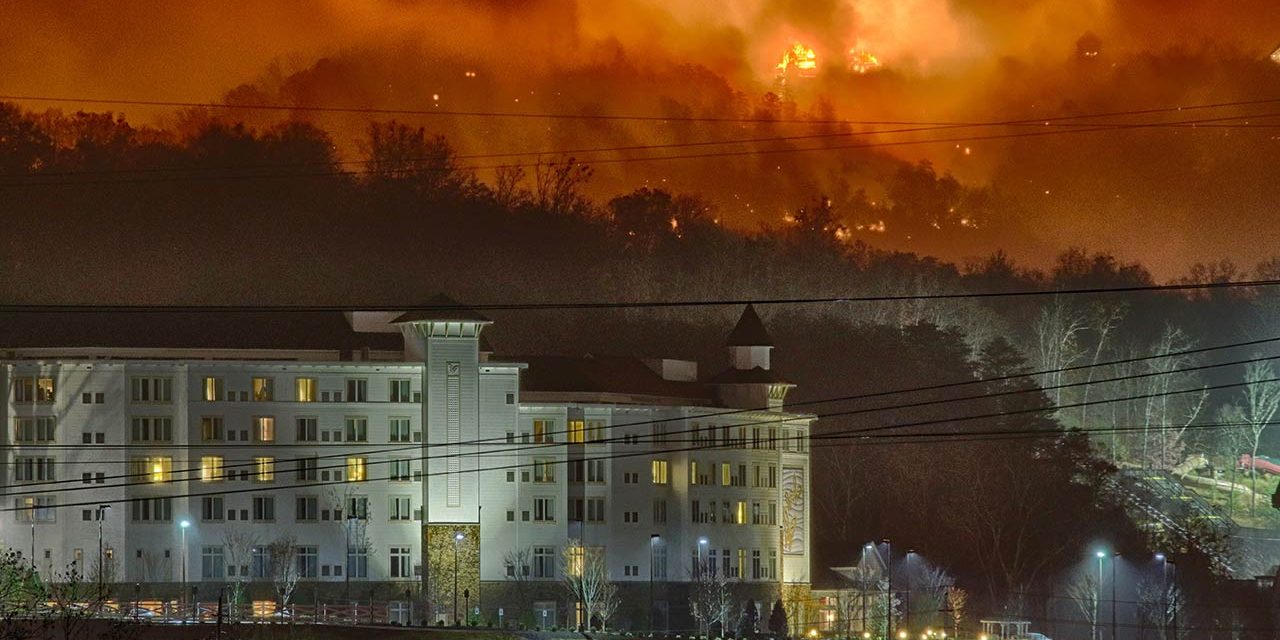 A mandatory evacuation order was issued for downtown Gatlinburg residents and guests after TEMA issued a Level 3 State of Emergency with 70 homes in Wears Valley, 70 homes in Cobbly Nob, and 150 structures damaged or destroyed by fire in Sevier County, including a 16-story hotel on Regan Drive, and the Driftwood Apartments near the Park Vista Hotel. The mandatory emergency evacuation for Pigeon Forge was lifted Tuesday. The National Guard was mobilized to Sevier County.

TEMA reports that 14,000 people evacuated Sevier County. Officials say a boil alert is in effect for Gatlinburg city water. A curfew in Gatlinburg starts 6 p.m. and lasts until 6 a.m. Wednesday.

The Gatlinburg Fire Chief said over 200 firefighters are working to put out the fires and an additional 212 firefighters were requested to help. No firefighters have been injured at this time. The single greatest concern for firefighters Tuesday night is the wind.

The Mayor of Gatlinburg told media outlets Tuesday, “We are going to rebuild our town and do whatever we can for our citizens.”

According to Pigeon Forge Fire Chief Tony Watson, there are multiple active fires in Pigeon Forge that crews are working to contain. In the city of Pigeon Forge, nine residential structures were destroyed by fire.

Dollywood, the 19 cabins owned by Dollywood, and Dollywood’s DreamMore Resort were evacuated Monday evening. Dollywood officials say there is no fire damage at this time. The East Tennessee amusement park will reopen Friday.

Ober Gatlinburg said, “Our property is okay. Please keep Sevier County in your thoughts and prayers! ”

Three county school buses are available for emergency transport and are being dispatched as needed to transport those who need to evacuate. The following locations are open and ready to receive those who need shelter: LeConte Center at Pigeon Forge, ?Pigeon Forge Community Center, Liberty Baptist Church in Wears Valley, and ?Iglesia Cristiana LaDuz De Jesus. First Baptist Church in Sevierville has opened for evacuees.

Fire erupts on both side of Highway 441 near The Spur on Monday, Nov. 28, 2016. (Photo: Jessica Tezak/Special to the News Sentinel)

The Tennessee Emergency Management Agency is asking Sevier County residents to stay off mobile devices unless it’s for emergency calls.

Officials with the Great Smoky Mountains National Park issued an air quality advisory and closed the park Monday. According to an update from GSMNP Tuesday morning, park officials reported “widespread fire damage” and continued fire activity throughout the Gatlinburg area and much of Sevier County including Wears Valley, Pigeon Forge and Jones Cove.

A representative with the park says the air quality is unhealthy for the Sevier County section of the park and adjacent areas, especially in the Gatlinburg area due to heavy smoke from the nearby Chimney 2 Fire. The Sevier County Humane Society said all animals are safe after an evacuation.

Investigators say the Chimney 2 fire started on November 23 on the north spire of the Chimney Tops. It was first reported at less than two acres and grew to eight acres by November 26. Spot fires spread outside the containment area Sunday due to 20 mph winds.

Chimney 2 fire officials have reports of people flying matches and say the fire was human-caused.

Students at the Pi Beta Phi Elementary School in Gatlinburg were moved to the Rocky Top Sports World Complex at 12:30 p.m. Monday as a precaution due to the air quality advisory.

People in the area were advised to refrain from strenuous or prolonged physical outdoor activities and limit exposure.

Great Smoky Mountains National Park received notice of a fire 150 yards behind the Twin Creek Pavilion off Cherokee Orchard Road at 11:35 a.m. It is unknown if the fire is associated with the Chimney 2 fire. Gatlinburg Police Officers went door to door asking residents of the Mynatt Park neighborhood to voluntarily evacuate to the Red Cross Evacuation Shelter set up at the Gatlinburg Community Center at 156 Proffitt Road on Monday afternoon. Residents needing transportation to the shelter can call 865-436-5181 for assistance.

Conditions remain extremely dangerous and officials say to stay off the roadways throughout the area. Travel in the Gatlinburg area is limited to emergency traffic only.

Video: Driving through downtown #Gatlinburg this morning was rather eerie… roadway closed due to area fires. pic.twitter.com/OKLTAFWL3x