Fauci Sets Stage for Omicron Panic, Warns Hospitals Could Be “Overwhelmed” Within “Weeks”

Dr. Anthony Fauci on Thursday predicted that the omicron variant will likely be the dominant strain in the US within “a few weeks,” and that hospitals may become overwhelmed this winter.

Fauci’s caveat was that the number of vaccinated individuals – ‘especially those with booster shots,’ will leave them “relatively well protected, at least against severe disease,” and that he’s most worried about the unvaccinated.

“With omicron breathing down our back, things could get really bad, particularly for the unvaccinated,” he said during an event hosted by the US Chamber of Commerce Foundation. “The vaccinated and those who are boosted I believe will be relatively well protected, at least against severe disease.”

South Africa doesn’t appear to be having problem despite just 23% of the population having been vaccinated. 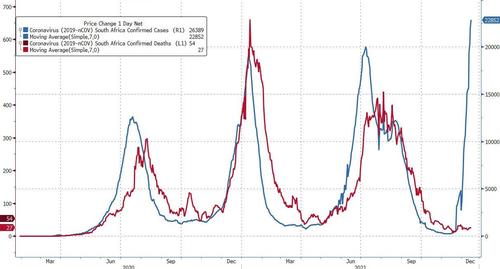 “Besides the toll of suffering and death which will inevitably go up if in fact we have that convergence in the winter months of flu and omicron and delta, we could get our hospital systems overwhelmed,” Fauci said.

The Biden administration has emphasized that boosters are the best response to the new variant, and has dismissed the idea of further business closures.

Asked about business closures, Fauci said “it’s going to really depend on how well we do the interventions,” like wearing masks in indoor public settings and getting booster shots.

“If we do that, I don’t believe we’ll have to be doing any kind of shutdown with regard to businesses in your community,” he said. –The Hill

For anyone paying attention, the new omicron variant has been described by officials around the world as ‘far more transmissible, yet mild’ in comparison to other Covid-19 strains.

This means that while fewer people are likely to die of omicron as a percentage of those infected, its hyper-transmissibility means a lot more people will contract the new strain – and despite a smaller percentage of severe cases, the actual number of hospitalizations may rise sharply.

In other words, the nuance here is in the denominator – and by leaving that out, Fauci is intentionally scaremongering.

Can anyone give a coherent explanation for why "boosters" are being mandated to curb "Omicron," which is purportedly spreading at exponential rates because existing vaccines do not prevent infection/transmission? Hence the spread on >99% vaccinated college campuses?