Over the past few weeks, the omicron variant has exploded out of southern Africa (the first case was identified in Botswana) and spread across most of the globe. And yet, despite all the kvetching about the variant being on track to succeed the delta variant as the world’s dominant strain… 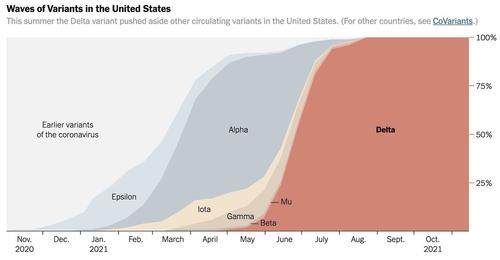 …South Africa delivered some positive news Friday when it reported a much lower rate of hospital admissions amid signs that the wave of infections may be peaking, according to Bloomberg.

Only 1.7% of identified COVID cases were admitted to the hospital in the second week of infections in the fourth wave, according to local data.

That’s compared with 19% in the same week of the third delta-driven wave, South African Health Minister Joe Phaahla said at a press conference.

This is all evidence that the strain may be milder, and that infections may already be peaking in the country’s most populous province, Gauteng.

Still, new cases in that week of the current wave were more than 20K a day, compared with 4.4K in the same week of the third wave. That’s further evidence of omicron’s rapid transmissibility, which a number of other countries, such as the UK are also now experiencing.

As for where that evidence might come from, South Africa, which announced the discovery of the variant on Nov. 25, is being watched as a canary in the coal mine.

There are a few key differentiators that make South Africa different from other countries: The country’s population is young compared with developed nations. What’s more, between 70% and 80% of citizens may also have had a prior COVID infection, according to antibody surveys, meaning they could have some level of protection.

Currently there are about 7.6K people infected with COVID in South African hospitals, about 40% of the peak in the second and third waves. Excess deaths, a measure of the number of deaths against a historical average, are just below 2K a week, an eighth of their previous peak.

“We are really seeing very small increases in the number of deaths,” said Michelle Groome, head of health surveillance for the country’s National Institute for Communicable Diseases.

The number of COVID hospitalizations in this wave is also being inflated by the fact that milder patients are being admitted because there is room to accommodate them. Many are there for other complaints but are routinely tested for the pathogen, according to health officials.

“We have seen a decrease in a proportion of people who need to be on oxygen. They are at very low levels,” said Waasila Jassat, a researcher with the NICD.

The final takeaway: “For the first time there are more non-severe than severe patients in hospital.”