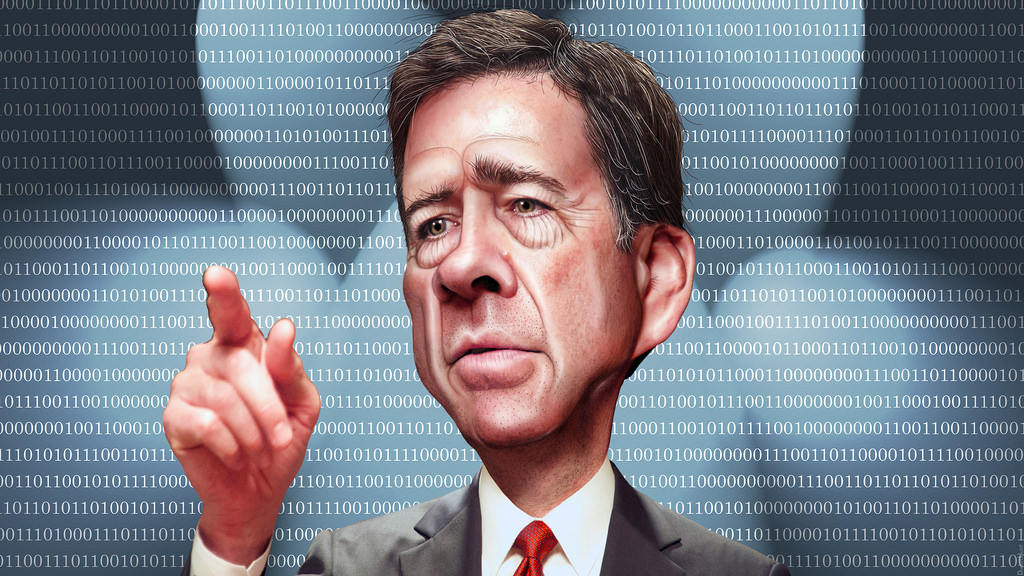 In the latest dramatic plot twist to emerge from Trump’s accusation that Obama wiretapped the Trump Tower prior to the election, the NYT reports that FBI director James Comey asked the Justice Department this weekend to publicly reject President Trump’s allegation that Obama eavesdropped on the soon-to-be president. According to the NYT, which cites ‘senior American officials’ Comey has argued that the “highly charged claim” is false and must be corrected as there is no evidence to back them up, but the DOJ has not yet released any such statement.

In other words, just a few months after Democrats savaged Comey for supposedly attacking Clinton, and even being responsible for the failure of her presidential campaign according to John Podesta, now it is the Republicans’ turn to accuse him of turning on Trump.

Comey, who made the request on Saturday after Mr. Trump leveled his allegation on Twitter, has been working to get the Justice Department to knock down the claim because it falsely insinuates that the F.B.I. broke the law, the officials said. What is strange is that the FBI is requesting the DOJ to publicly deny Trump’s claim when it is the FBI that has the jurisdiction to request a FISA warrant. It is therefore perplexing why Comey, if he wants to put the matter to rest, does not make the public denial himself instead of asking the DOJ to do it on the FBI’s behalf.

To be sure, as the NYT adds, a statement by the DOJ or by Comey refuting Mr. Trump’s allegations “would be a remarkable rebuke of a sitting president, putting the nation’s top law enforcement officials in the position of questioning the truthfulness of the government’s top leader” and adds that the situation “underscores the high stakes of what the president and his aides have unleashed by accusing the former president of a conspiracy to undermine Mr. Trump’s young administration.”

Furthermore, it is unclear who at the DOJ would issue such as statement, “even if it wanted to one”, as Trump’s close ally, AG Jeff Sessions has recused himself from any Trump-Russia investigation. As the NYT points out, “there are few senior politically appointed officials at the Justice Department who can make the decision to release a statement, the officials said. Attorney General Jeff Sessions recused himself on Thursday from all matters related to the federal investigation into connections between Mr. Trump, his associates and Russia.”

Furthermore, such a public statement would further position the nation’s top law enforcement agencies against the Executive Branch.

Along with concerns about potential attacks on the bureau’s credibility, senior F.B.I. officials are said to be worried that the notion of a court-approved wiretap will raise the public’s expectations that the federal authorities have significant evidence implicating the Trump campaign in colluding with Russia’s efforts to disrupt the presidential election.

That, or raise even greater “worries” about allegations that the Obama administration was seeking to potentially sabotage a presidential candidate with a wiretap over Trump’s Russian connections that, as Clapper admitted earlier, has found nothing.

In an additional ironic twist, Comey’s behind-the-scenes maneuvering is certain to invite contrasts to his actions last year, when he spoke publicly about the Hillary Clinton email case and disregarded Justice Department entreaties not to.

Meanwhile as reported earlier, the White House showed no indication that it would back down from Trump’s claims. On Sunday, White House spokesman Sean Spicer said that the White House has demanded a congressional inquiry into whether Obama had “abused the power” of federal law enforcement agencies prior the 2016 presidential election. In the statement, Trump called “reports” about the wiretapping “very troubling” and said that Congress should examine them as part of its investigations into Russia’s meddling in the election.

As reported earlier, according to Newsmax CEO Christopher Ruddy, Trump was “pissed” about the wiretap story, and said that “when I mentioned Obama “denials” about the wiretaps, he shot back: “This will be investigated, it will all come out. I will be proven right.”

It is unclear if the Comey statement would be found evidentiary, and would put the matter to rest or if, as Trump has demanded, a full blown probe into the alleged wiretapping will proceed regardless, especially since as in the case of former DNI director Clapper earlier today, it would be the DOJ’s word against that of the president.

In case Mr. Comey (or Ms. Lynch) needed a reminder of just what the so-called ‘Obamagate’ timeline looks like – and where the DoJ was allegedly involved – here is the story so far…

2. July: Russia joke. Wikileaks releases emails from the Democratic National Committee that show an effort to prevent Sen. Bernie Sanders (I-VT) from winning the presidential nomination. In a press conference, Donald Trump refers to Hillary Clinton’s own missing emails, joking: “Russia, if you’re listening, I hope you’re able to find the 30,000 e-mails that are missing.” That remark becomes the basis for accusations by Clinton and the media that Trump invited further hacking.

4. October: FISA request. The Obama administration submits a new, narrow request to the FISA court, now focused on a computer server in Trump Tower suspected of links to Russian banks. No evidence is found — but the wiretaps continue, ostensibly for national security reasons, Andrew McCarthy at National Review later notes. The Obama administration is now monitoring an opposing presidential campaign using the high-tech surveillance powers of the federal intelligence services.

5. January 2017: Buzzfeed/CNN dossier. Buzzfeed releases, and CNN reports, a supposed intelligence “dossier” compiled by a foreign former spy. It purports to show continuous contact between Russia and the Trump campaign, and says that the Russians have compromising information about Trump. None of the allegations can be verified and some are proven false. Several media outlets claim that they had been aware of the dossier for months and that it had been circulating in Washington.

6. January: Obama expands NSA sharing. As Michael Walsh later notes, and as the New York Times reports, the outgoing Obama administration “expanded the power of the National Security Agency to share globally intercepted personal communications with the government’s 16 other intelligence agencies before applying privacy protections.” The new powers, and reduced protections, could make it easier for intelligence on private citizens to be circulated improperly or leaked.

7. January: Times report. The New York Times reports, on the eve of Inauguration Day, that several agencies — the Federal Bureau of Investigation (FBI), the Central Intelligence Agency (CIA), the National Security Agency (NSA) and the Treasury Department are monitoring several associates of the Trump campaign suspected of Russian ties. Other news outlets also report the exisentence of “a multiagency working group to coordinate investigations across the government,” though it is unclear how they found out, since the investigations would have been secret and involved classified information.

8. February: Mike Flynn scandal. Reports emerge that the FBI intercepted a conversation in 2016 between future National Security Adviser Michael Flynn — then a private citizen — and Russian Ambassador Sergey Kislyak. The intercept supposedly was part of routine spying on the ambassador, not monitoring of the Trump campaign. The FBI transcripts reportedly show the two discussing Obama’s newly-imposed sanctions on Russia, though Flynn earlier denied discussing them. Sally Yates, whom Trump would later fire as acting Attorney General for insubordination, is involved in the investigation. In the end, Flynn resigns over having misled Vice President Mike Pence (perhaps inadvertently) about the content of the conversation.

9. February: Times claims extensive Russian contacts. The New York Times cites “four current and former American officials” in reporting that the Trump campaign had “repeated contacts with senior Russian intelligence officials. The Trump campaign denies the claims — and the Times admits that there is “no evidence” of coordination between the campaign and the Russians. The White House and some congressional Republicans begin to raise questions about illegal intelligence leaks.

10. March: the Washington Post targets Jeff Sessions. The Washington Post reports that Attorney General Jeff Sessions had contact twice with the Russian ambassador during the campaign — once at a Heritage Foundation event and once at a meeting in Sessions’s Senate office. The Post suggests that the two meetings contradict Sessions’s testimony at his confirmation hearings that he had no contacts with the Russians, though in context (not presented by the Post) it was clear he meant in his capacity as a campaign surrogate, and that he was responding to claims in the “dossier” of ongoing contacts. The New York Times, in covering the story, adds that the Obama White House “rushed to preserve” intelligence related to alleged Russian links with the Trump campaign. By “preserve” it really means “disseminate”: officials spread evidence throughout other government agencies “to leave a clear trail of intelligence for government investigators” and perhaps the media as well.