FBI Director Comey Unexpectedly Shows Up At The White House 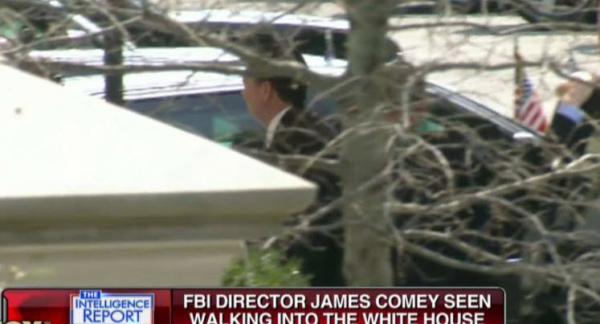 Update: as Reuters’ Steve Holland reports, the reason Comey is at the White House is for “a routine inter-agency meeting,” per WH official.

Re FBI's Comey at the White House: "He is here for a routine interagency meeting," per WH official.

FBI Director James Comey is at the White House, @ABC confirms. No answer from FBI or WH as to why.

And as CNBC adds, around 3pm ET, Comey departed the White House after his unannounced visit.

ABC’s Jennfier Hasler reports that FBI Director James Comey is at The White House and has had no response from either The FBI or White House as to why..

.@FBI Director Comey has been here at White House for past 30 minutes or so per @JaxAlemany. Unclear who he is meeting with now.

Interesting timing no doubt after Nunes’ press conference this morning…

“The lack of a leak investigation is quite concerning. We need to make sure that these leaks are being tracked down…There are just questions that we have for Dir. Comey and Adm. Rogers probably that they couldn’t answer in a public setting…”