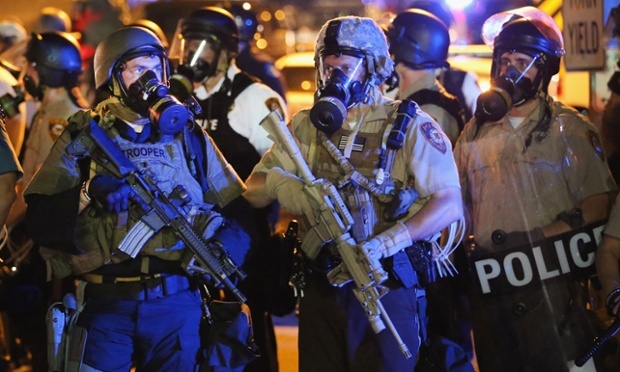 The police department overseeing the protests in Ferguson, Missouri, over the killing of an unarmed 18-year-old has spent tens of thousands of dollars replenishing their stocks of teargas, “less lethal” ammunition and riot gear in advance of a potential revival in demonstrations.

St Louis County police made the purchases amid concerns that hundreds of demonstrators will return to the streets if Darren Wilson, the officer who shot dead Michael Brown in August, is not indicted on criminal charges by a grand jury currently considering the case.

A breakdown of the department’s spending since August on equipment intended for the policing of crowds and civil disobedience, which totals $172,669, was obtained by the Guardian from the county force.

Since the height of the protests, the department has spent almost $25,000 buying 650 teargas grenades, smoke-and-gas grenades, smoke canisters and “hornets nest” CS sting grenades, which shoot out dozens of rubber bullets and a powdered chemical agent upon detonation.

It has spent a further $18,000 on 1,500 “beanbag rounds” and 6,000 pepper balls, paintball-style projectiles that explode with a chemical irritant when they strike a protester. The department uses LiveX branded pepper balls, which are billed as ten times hotter than standard pepper rounds.

Another $77,500 has been spent on 235 riot gear helmets, 135 shields, 25 batons and 60 sets of shin guards, and other “uniform items”. A further $2,300 was used to buy another 2,000 sets of the plastic handcuffs that have been used to detain dozens of demonstrators plucked from crowds on West Florissant Avenue.

In addition, an estimated $50,000 has been set aside by the department for repair work for damaged police vehicles. However, in a sign that further clashes are expected, they are in fact “not repairing any vehicles until unrest is over”, a department inventory said.

“We purchase these items in hopes that we never have to use any of them,” said Sergeant Brian Schellman, a spokesman for the county police department. “But it is our responsibility to have proper equipment to keep our police officers and all citizens safe should violence break out anywhere at any time.”

In the event of further unrest, the new equipment is likely to be used alongside new purchases made by the city of St Louis’s metropolitan police force and the Missouri state highway patrol, which was handed temporary control of policing the protests at the height of August’s unrest, following criticism of the county force’s tactics by regional and national leaders.

Captain Tim Hull of the state highway patrol confirmed to the Guardian that the force had bought new crowd control equipment since then. “However, the specific information is [a] closed record” under Missouri state law, Hull said in an email.

The Associated Press previously reported that Chief Sam Dotson of the St Louis metropolitan police said his force recently spent $325,000 on “civil disobedience equipment”. Asked by the Guardian to confirm this total and to provide details of what was bought, a spokeswoman for the force said in an email that this would take several weeks.

The military-style police response to the demonstrations in August, which attracted intense global media coverage, led to calls for restraint from figures such as President Barack Obama and Claire McCaskill, Missouri’s senior US senator.

Observers from Amnesty International said in a report earlier this month that an excessive police reaction to a small minority of violent protesters who threw bottles in Ferguson had run the risk of killing demonstrators and impinged on their human rights.

They noted that the so-called “less-lethal” ammunition shot at crowds in Ferguson – such as wooden bullets, beanbag rounds, and rubber bullets – “can result in serious injury and even death”. The report found that “at least two children were treated for exposure to teargas” during the protests.

“Equipping officers in a manner more appropriate for a battlefield may put them in the mindset that confrontation and conflict is inevitable rather than possible, escalating tensions between protesters and police,” said the report.