After the financial crises of 2008, the people of Iceland elected twenty-five non-political citizens to write a new constitution to free Iceland from the exaggerated power of international finance. The Icelanders could witness and comment on the constitution as it was being drafted online. 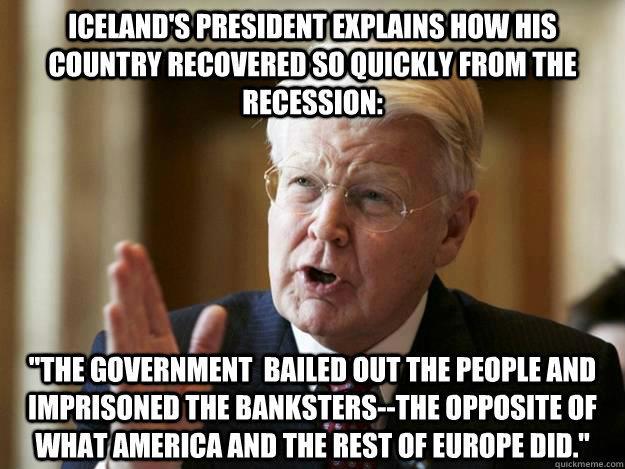 An Italian radio program’s story about Iceland’s on-going revolution is a stunning example of how little our media tells us about the rest of the world. Americans may remember that at the start of the 2008 financial crisis, Iceland literally went bankrupt.  The reasons were mentioned only in passing, and since then, this little-known member of the European Union fell back into oblivion.

As one European country after another fails or risks failing, imperiling the Euro, with repercussions for the entire world, the last thing the powers that be want is for Iceland to become an example. Here’s why:

Five years of a pure neo-liberal regime had made Iceland, (population 320 thousand, no army), one of the richest countries in the world. In 2003 all the country’s banks were privatized, and in an effort to attract foreign investors, they offered on-line banking whose minimal costs allowed them to offer relatively high rates of return. The accounts, called IceSave, attracted many English and Dutch small investors.  But as investments grew, so did the banks’ foreign debt.  In 2003 Iceland’s debt was equal to 200 times its GNP, but in 2007, it was 900 percent.  The 2008 world financial crisis was the coup de grace. The three main Icelandic banks, Landbanki, Kapthing and Glitnir, went belly up and were nationalized, while the Kroner lost 85% of its value with respect to the Euro.  At the end of the year Iceland declared bankruptcy.

Contrary to what could be expected, the crisis resulted in Icelanders recovering their sovereign rights, through a process of direct participatory democracy that eventually led to a new Constitution.  But only after much pain.

Geir Haarde, the Prime Minister of a Social Democratic coalition government, negotiated a two million one hundred thousand dollar loan, to which the Nordic countries added another two and a half million. But the foreign financial community pressured Iceland to impose drastic measures.  The FMI and the European Union wanted to take over its debt, claiming this was the only way for the country to pay back Holland and Great Britain, who had promised to reimburse their citizens.

Protests and riots continued, eventually forcing the government to resign. Elections were brought forward to April 2009, resulting in a left-wing coalition which condemned the neoliberal economic system, but immediately gave in to its demands that Iceland pay off a total of three and a half million Euros.  This required each Icelandic citizen to pay 100 Euros a month (or about $130) for fifteen years, at 5.5% interest, to pay off a debt incurred by private parties vis a vis other private parties. It was the straw that broke the reindeer’s back.

What happened next was extraordinary. The belief that citizens had to pay for the mistakes of a financial monopoly, that an entire nation must be taxed to pay off private debts was shattered, transforming the relationship between citizens and their political institutions and eventually driving Iceland’s leaders to the side of their constituents. The Head of State, Olafur Ragnar Grimsson, refused to ratify the law that would have made Iceland’s citizens responsible for its bankers’ debts, and accepted calls for a referendum.

Of course the international community only increased the pressure on Iceland. Great Britain and Holland threatened dire reprisals that would isolate the country.  As Icelanders went to vote, foreign bankers threatened to block any aid from the IMF.  The British government threatened to freeze Icelander savings and checking accounts. As Grimsson said: “We were told that if we refused the international community’s conditions, we would become the Cuba of the North.  But if we had accepted, we would have become the Haiti of the North.” (How many times have I written that when Cubans see the dire state of their neighbor, Haiti, they count themselves lucky.)

In the March 2010 referendum, 93% voted against repayment of the debt.  The IMF immediately froze its loan.  But the revolution (though not televised in the United States), would not be intimidated. With the support of a furious citizenry, the government launched civil and penal investigations into those responsible for the financial crisis.  Interpol put out an international arrest warrant for the ex-president of Kaupthing, Sigurdur Einarsson, as the other bankers implicated in the crash fled the country.

But Icelanders didn’t stop there: they decided to draft a new constitution that would free the country from the exaggerated power of international finance and virtual money.  (The one in use had been written when Iceland gained its independence from Denmark, in 1918, the only difference with the Danish constitution being that the word ‘president’ replaced the word ‘king’.)

To write the new constitution, the people of Iceland elected twenty-five citizens from among 522 adults not belonging to any political party but recommended by at least thirty citizens. This document was not the work of a handful of politicians, but was written on the internet. The constituent’s meetings are streamed on-line, and citizens can send their comments and suggestions, witnessing the document as it takes shape. The constitution that eventually emerges from this participatory democratic process will be submitted to parliament for approval after the next elections.

Some readers will remember that Iceland’s ninth century agrarian collapse was featured in Jared Diamond’s book by the same name. Today, that country is recovering from its financial collapse in ways just the opposite of those generally considered unavoidable, as confirmed yesterday by the new head of the IMF, Christine Lagarde to Fareed Zakaria. The people of Greece have been told that the privatization of their public sector is the only solution.  And those of Italy, Spain and Portugal are facing the same threat.

They should look to Iceland. Refusing to bow to foreign interests, that small country stated loud and clear that the people are sovereign.

That’s why it is not in the news anymore.

Stryker is an American writer that has lived in six different countries, is fluent in four languages and a published writer in three. She looks at the big picture from a systems and spiritual point of view.

This article was originally published by the Daily Kos. SACSIS cannot authorise its republication.