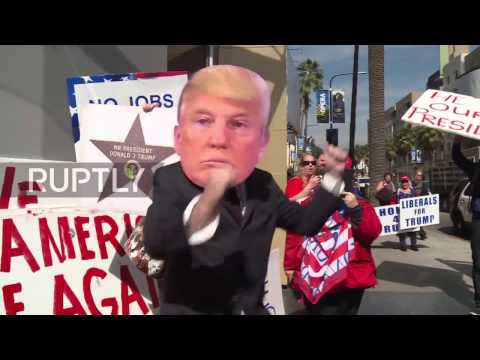 A fury of fists flew outside the Oscars, as Donald Trump supporters and protesters clashed Sunday afternoon at the boycott the Oscars protest.

A video uploaded by Ruptly captured the moment that incident occurred.

The blonde woman then grabs her sign and snaps it in half, and the two get into a brawl.

“Oh, bring it b*tch,” the woman says in an angry rage, as she begins throwing punches.

Another woman, a brunette wearing white, jumps into the middle of the skirmish and hits the Trump supporter while screaming “B*tch don’t touch her b*tch back the f*ck up.”

Police officers arrive at the altercation and grab both women, attempting to break up the fight.

Another man wearing an American flag hat also intervenes, saying “back up back up, ” prompting the brunette woman in white to move closer to him and scream, “b*tch you back up.”

The officers then walk both women away and proceed to handcuff them both.

It didn’t end there. A brunette woman then confronts another older woman wearing a Trump beanie and calls her a “big dumb b*tch [inaudible.]”

An older man with a beard quickly intervened, stepping between the two.

“You get the f*ck out my face too b*tch,” the brunette asserts.

The younger Latino man then begins to tell his stream that the woman is fake.

“Look at this fake girl this youngster girl,” he says to his stream.

She responds calling the man a “b*tch!”

Another older man steps forward, and the brunette screams “get out of my face b*tch.” All of them then proceed to call the brunette “crazy.”

The younger Latino man then starts chanting “Trump, Trump to the fullest.”

The woman then walks away, telling them to “kiss her ass.”

The woman then comes back and touches the man’s camera, and the Latino man says “don’t touch my camera.”

To which he responds “you can’t even vote.”

Dozens of supporters of U.S. President Donald Trump rallied on the Hollywood Boulevard in Los Angeles, Saturday, a day ahead of the Academy Awards ceremony, in order to defend the president and protect his star on the Walk of Fame which has been vandalized previously a number of times once with a swastika and again with a pick axe.