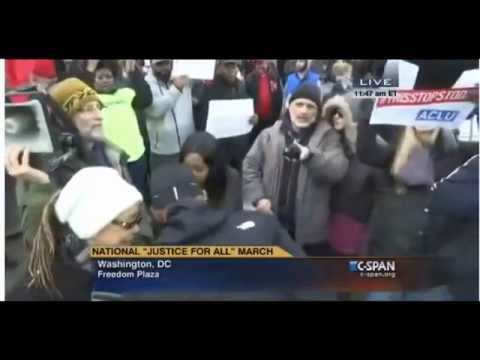 A Fox affiliate out of Baltimore has been accused of deceptively editing a video, making it seem as though protesters in the nation’s capitol chanted, “Kill a cop,” when they were actually calling for accountability.

Over the past 24 hours, while giving background on the shooting deaths of two NYPD officers, WBFF thrice aired footage of a protest that took place in Washington D.C., last week, where demonstrators were filmed drawing attention to police violence.

“At this rally in Washington, D.C., participants chanted, ‘We won’t stop, we can’t stop, so kill a cop,’” WBFF reporter Melinda Roeder described while reviewing a video of protests posted last week.

View the WBFF video clip below:

“The anti-police sentiment reached a turning point this weekend in New York when two officers were gunned down in cold blood,” the reporter says.

However, the unedited version of the video clip from C-Span, going under the Youtube headline, “Sharpton’s ‘Go Kill A Cop’ march in Wash DC,” shows protesters chanting:

We won’t stop.
We can’t stop.
‘Til killer cops.
Are in cell blocks.