How Fox News Creates Its Own Insane Reality 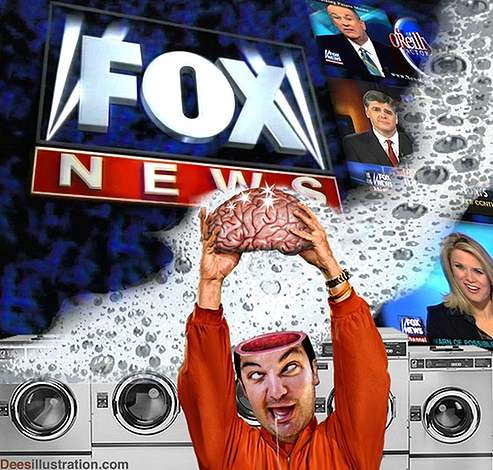 Every once in a while a Fox personality says something so outlandish he shocks himself. Such was the case when Fox Business host Charles Payne got amped up over Michael Moore’s American Sniper criticism and unleashed a bizarre reading of America’s overseas military efforts. “We have saved the planet,” he shouted at the camera, to the visible discomfort of his cohosts, “and if we go away as America’s policeman, it will be hell to pay.”

The statement was outrage click-gold, but its virality obscured a crucial quality: even a market-drunk paleocapitalist like Payne doesn’t actually believe the American-produced quagmire in Iraq was the real-world equivalent of the Avengers.

Payne’s outburst followed a solid week of escalating rhetoric against Moore, Seth Rogen and other critics of the film. Fox hosts first mounted defenses of Chris Kyle, then of snipers, then of the military, and finally of the Iraq debacle. By the time Payne was plied with Moore’s quote, the network had made the saintliness of the U.S.’s war effort a precondition of Kyle’s defense. Though it sounded outlandish to the rest of us, it was actually just Payne walking that sentiment one step further.

This is how Fox News tricks itself. What begins as heated claims—a hyperbolic statement to hook a viewer, a vulnerable figure to be elevated to villain—is repeated and amplified until the outrage-inducing nonsense is churned into the network’s observed truth. Call it the revenge of the talking point.

Partisan news is a repetitive business, and a talking point is grown over the course of several days and weeks. An errant comment quoted by one show out of context is then repeated by the next fully devoid of that context, until it becomes a self-referential outrage lever pulled by the evening shows at will. By the next day, the offending comment or subject is reintroduced as a pre-formed scandal which the network hosts respond to as if it were a piece of the discourse that rudely shoved its way into the studio and now must be dealt with.