Free Speech Is Fundamental, Yet Tax Protesters Get Penalties Or Jail 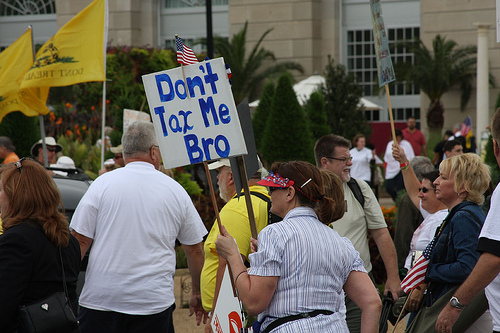 The right to protest may be fundamental, but tax protests seem to be treated differently than many others. Despite free speech protections, some arguments about taxes seem almost as incendiary as yelling ‘fire’ in a crowded theater. Even the Canadian government is cracking down on tax protesters. The Canada Revenue Agency just executed nine search warrants as part of an investigation into tax evasion involving suspected tax protesters.

About 80 tax investigators were joined in the operation by officers from the Sûreté du Québec. Canadian Revenuers are always on the lookout for illegal tax schemes and those who promote them and so is the IRS. In the U.S., a tax protester usually means someone denying the authority of the IRS. In 1998, Congress prohibited the IRS from labeling people as “illegal tax protesters.” Congress even ordered the IRS to purge the “protester” code from the computer files of 57,000 Americans.

However, a report issued by the Treasury’s watchdog Treasury Inspector General for Tax Administration says IRS employees still use the epithet in their case narratives despite legal guidelines prohibiting the use of illegal tax protester designations. The report said that the continued use of “Illegal Tax Protester” and similar labels stigmatizes taxpayers and causes IRS employees to be biased against them. The report found 38 cases where 34 employees called taxpayers “Tax Protester,” “Constitutionally Challenged,” or something similar.

Whatever you call them, anyone who makes frivolous tax arguments can be singled out for extra penalties. In general, if the IRS finds your argument or tax position is “frivolous,” it means a 20% accuracy-related penalty (under Section 6662); perhaps even a whopping 75% civil fraud penalty (Section 6663). A frivolous position on an amended return asking for money back can trigger a 20% penalty for an erroneous claim for refund (Section 6676).

If you file your return late with frivolous positions, the usual penalties (for fraudulent failure to timely file an income tax return) can be tripled up to another whopping 75% (Section 6651(f)). Moreover, apart from tax returns, frivolous other tax forms can trigger penalties too. There’s a $5,000 penalty for frivolous tax returns (Section 6702) and you can be separately penalized even for sending seemingly innocuous tax forms.
How does a normal taxpayer know what’s frivolous? The IRS publishes its own list of frivolous positions. Still, a surprising number of people make these arguments. For example, Scott Grunsted claimed his wages weren’t taxable. His argument: the federal government can only tax income that is federally connected and not from the private sector. Nope, he lost.

In Worsham v. Commissioner, a lawyer filed a tax return every year from 1989 through 2004. Then, he concluded that he wasn’t required to file returns or pay taxes. As a result, he didn’t. The IRS said he was just a protester making frivolous and groundless arguments.

Maybe, said the court, but since it was his first batch of flaky arguments, the court just warned him. He did have to pay taxes, penalties and interest, but not the big penalties reserved for people formerly known as protesters. Not all cases of this sort end this happily.

U.S. tax laws are famously complex, more so than in any other country in the world. It can be surprisingly difficult to separate legitimate arguments from the ones that should belong on the cutting room floor. And since many people do not have the technical expertise to know the difference, there’s a premium put on professional advice.

So whatever your position, and whoever you have relied upon, consider getting a disinterested second opinion. Many civil and criminal tax cases start with taxpayers blindly following their advisers. So be careful what advice you take to heart.

You can reach me at Wood@WoodLLP.com. This discussion is not intended as legal advice, and cannot be relied upon for any purpose without the services of a qualified professional.